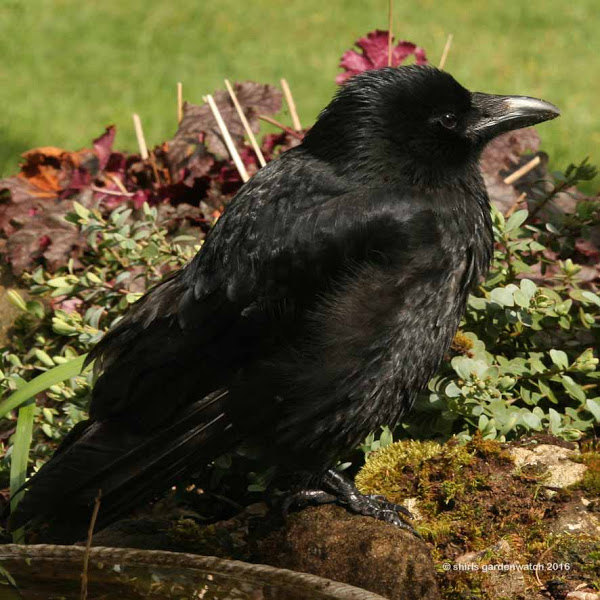 All week (National Gardening Week here in the UK) there has been a lonely carrion crow wandering around the garden, looking quite lost. By its behaviour of pecking at things (as if to test if edible) I might have guessed it to be a juvenile but it isn’t showing the yellow or red gape to support that. I should have considered that before asking Dave Culley on twitter last night. Thanks Dave! Btw Dave is currently filming a Tawny owl nest box with chicks in his garden and posting updates on his twitter page – fantastic to see, Dave 🙂

The carrion crow is a pretty clever bird so it’s odd to see it just hanging around appearing to have no strong focus in where it is going or exactly where the food is. Back and forth it has walked along the edges of the border around my small, rock pool pond before going off road and through the plants. A stop for a good look around, a brief drink from the ground sited bird bath and the route is repeated once more. 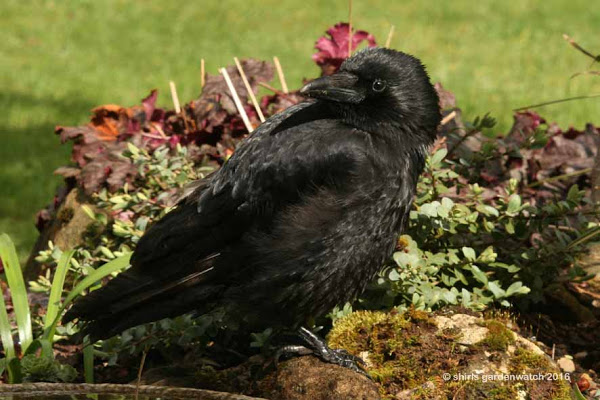 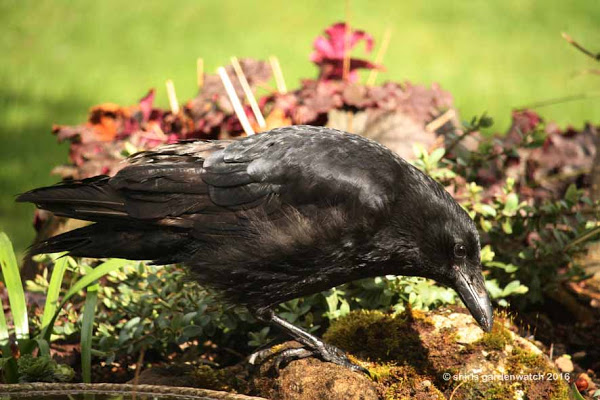 Not knowing much about this crow, it was interesting to read that it can be quite solitary. I guess they are quite different from their fellow corvids, the Jackdaws who do hunt in groups. In my garden, the Woodpigeons appear to be observing this new intruder of the borders – after all it’s their role to clumsily flatten newly emerging shoots and young plants!

When uploading my photos (taken yesterday, through a window) two captures showed something odd with this bird’s eye. On zooming in, to the image below, it looked like this bird had a cataract over its eye. Mmm… but the other images looked okay… could it be blinking then? 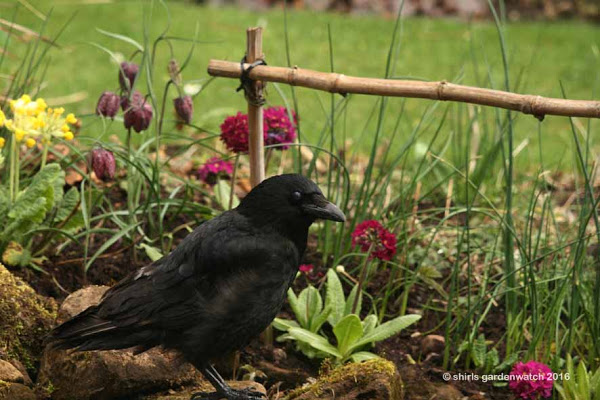 A quick internet search picked up a much stronger example of this on iSpot. It appears my photo did capture the carrion crow blinking – well that’s a first in all my years’ gardenwatching! A commenter to the iSpot image explains:

”It looks like you’ve caught this Crow while it was blinking. Birds have a third eyelid, called the nictitating membrane, which closes horizontally across the eye. This is usually transparent, but can appear opaque in photographs.”

That opaque appearance is very clear in the iSpot capture. Even creepier looking though, an image captured in my garden yesterday shows this third eyelid half closed! The shaky beak suggests the crow was moving at the time… towards sultanas perhaps? 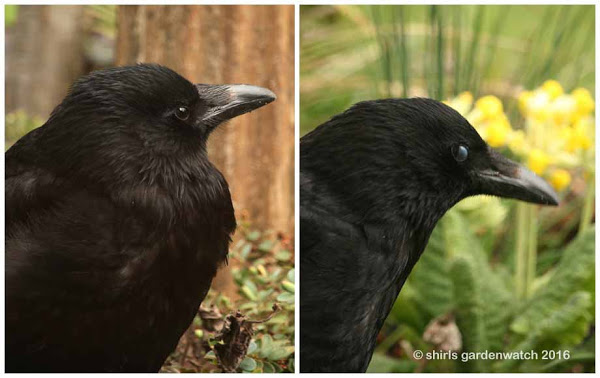 A selection of sultanas, unsalted peanuts and dried mealworms have been scattered on ground rocks a few times this week. I had wondered if I’d seen this crow with a peanut that had been dropped on a lawn edge earlier this week.

Today, it was clear that was exactly what it had found. It also found the sultanas (all that was left when I was watching today) and was seen eating them from in-between its toes just as a blue tit would do a sunflower heart. 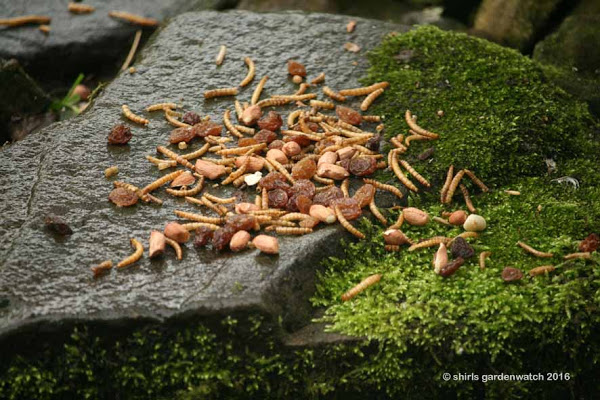 So, this week has seen another garden first with a regular carrion crow making itself at home in the garden. On one side, it has been interesting watching this lonesome bird, but the reality of nature is that its presence in gardens isn’t exactly good for other birds at this time.

As well as being a scavenger of dead animals and road kill, when in gardens, the carrion crow will not only feed on the fruit, nuts, insects, snails and worms available there. The carrion crow will also raid garden nests of smaller birds for eggs and chicks!

So, although we have been feeling sorry for our ‘no mates’ carrion crow this week, it’s time to bid it farewell. My plan, to get it moving on, is to cease ground feeding for a few days as we’d like our resident garden species to have a safe and successful breeding season 😀

This post was published by Shirley for shirls gardenwatch in April 2016.