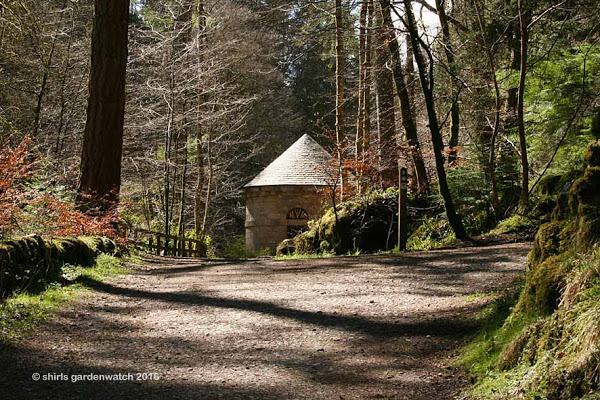 It’s fair to say last weekend was a busy one in and out of the garden for both myself and wildlife. Not on the radar, at all, was the very busy Coal tit speedily nest building in my camera nest box on Sunday! To say I’m absolutely thrilled is an understatement. What a delightful little bird this is to see in the garden, so fast and acrobatic. It’s quite a little character that’s for sure and one of my favourite garden visitors.

Sunny weather brought everyone out at the weekend. I wonder if our nesting Coal tit pair were investigating our nest box when I was out on Saturday. They probably were. I have previously thought I’ve seen them go in (PC not on to check) but thought I was mistaken as I never expected they would use a garden nest box. This year, Great tits and Blue tits have been seen investigating our camera nest box, they usually chase each for it too. I’m so glad they moved on 🙂

Moving around Perthshire at the weekend, our first stop on Saturday was a woodland walk near Dunkeld. The car parks at NTS The Hermitage were very busy, coach tour guides were seen giving talks as well as what appeared to be organised off road cycling for a variety of ages. It was great to see so many young families out too.

Looking back to Ossian’s cave on our way back to car park.

On a wider drive home we took in the SWT Reserve, Loch of the Lowes for a coffee by the observation window in the Visitor Centre. I do enjoy chatting to the visitors there, especially ones who have never been before and don’t know what to expect to see. The staff and volunteers are always friendly and chatty too.

The new resident breeding pair of Ospreys (currently incubating three eggs) are attracting many visitors just now as does the live webcam on the nest. I don’t always go out to the hides on my ‘passing by’ visits but I was rewarded on Saturday as the male Osprey brought the female a fish. The fish was headless – he ate this most nutritious bit himself. The female left the nest to eat the rest of the fish leaving him to incubate the eggs for a while. 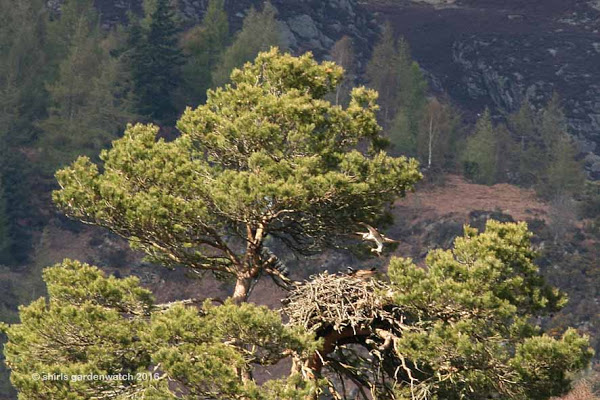 A record shot, unfortunately the tripod plate was on video camera at home .
This was the first time I’ve seen this for real, over many Osprey season visits!

My tripod was in use before we went out to film another garden first – the tadpoles currently surviving in our wildlife pond! The light was good to see them then. Yep, they are still with us despite odd cold mornings and the heavy snowfall we had on Thursday night and waking up to the garden with a good 4 inch covering of snow on Friday morning too!

Fortunately the snow melted as quickly as it came, flattening new delicate stems on a few plants first though! I find myself standing by the edge of my wildlife pond willing the tadpoles to move and on Saturday morning I was rewarded there too, as you can see below. I had never seen so many move until then. I couldn’t resist adding a fun sound track to my video, purely for entertainment purposes of course 😉

Coal tits are the entertainers of any garden they visit with their speed and skilled flying, feeding upside down and at varying angles too. Tiny as they are they, they were being spotted feeding, at all angles along the branches of my coral barked Acer with its unfurling, fresh new leaves on the Saturday and I never thought anything of it.

There’s also a hanging sunflower feeder on this Acer tree which I expected the coal tit was feeding from too. It wasn’t until later on the Sunday that I realised this Acer was their approach route to our camera nestbox! Blue tits and Great tits always used the top of the pine trees and the Cotoneaster opposite it – that was always my clue to any nestbox activity. 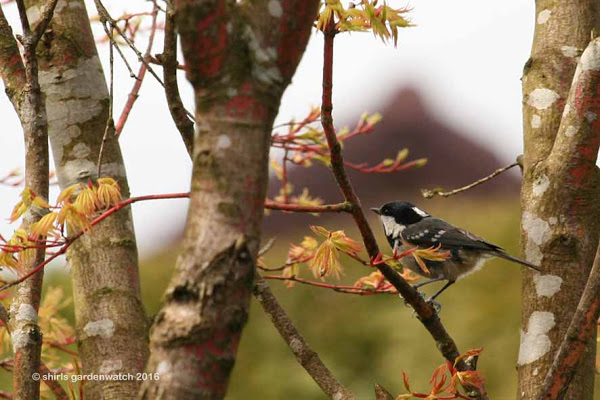 The colouring of the Coal tit contrasts well with the younger coral stems.

Sunday morning, saw me solo for a garden tour at Branklyn Garden (on the outskirts of the City of Perth). I have visited this garden a few times over the years. It is truly a plantsman’s garden and that is what draws me back.

On this occasion, its opening was part of the Scotland’s Garden Scheme and there were two guided walks. I choose to go for the morning one – which was fortunate as I wouldn’t have been home to see how quickly our nest box was filled with moss in the afternoon! I would have eventually have noticed birds going in but missed the exciting start of the nest being built. 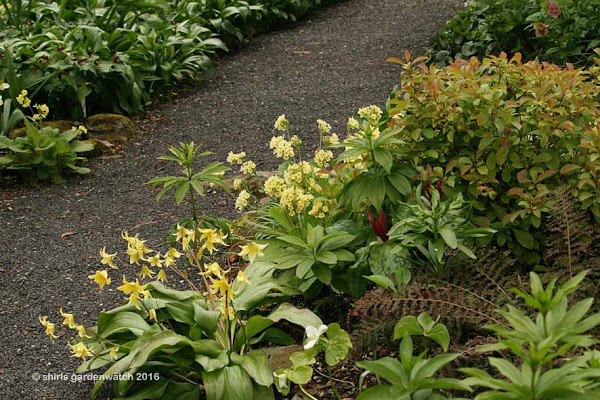 Branklyn borders, May 1st, I’ll keep the other images for another post.

The stunning blue poppies (meconopsis) in other areas of Branklyn have a bit of growing to do yet but will be in flower later in the month. Note to self: Meconopsis Day, Branklyn, Sun 29 May 2016. As well as thoroughly enjoying my guided tour of Branklyn, my visit also gave me an answer to the missing ID of a Rhododendron taken from my first garden.

Missing notes and plant label ID’s of garden plants is something I have been working on over the winter months. It’s been both fun and time consuming (keeping me away from blogging and other PC stuff). However, it’s something I have wanted to address for a long time. Now that we are in May and hands on gardening is required my lists will slow down, I just need to keep taking photos as they are invaluable as garden records. 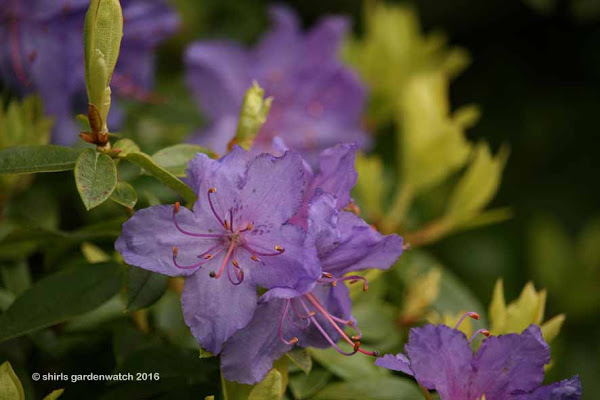 Saturday had been a good day for wildlife sightings and captures. Little did we know that the best was yet to come on Sunday afternoon! Putting my jacket away on my return from Branklyn, I glanced out a back window to see a bird going in our camera nest box. I didn’t think any birds were interested in it this year.

However, I put the PC to take a look in the camera nestbox, really expecting that the bird would be well gone. The sight inside was the highlight of the weekend. What a surprise it was. I began capturing images from the nest cam and then headed outside to see if I could capture photos and video of the Coal tits going inside. 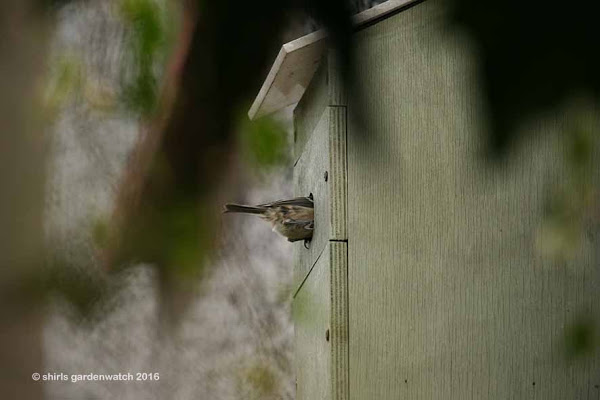 Hiding under the pergola I spied the busy, nest building Coal tit going inside 🙂

A video screen grab below shows how big the beakfuls of moss were on Sunday afternoon! Going anticlockwise through the images, the nestbox as we viewed it first and the Coal tit roosting in a very full box of moss at the end of Sunday. Yesterday saw more material go in and the bird roosting again. The final picture shows the view this morning with the fine hair and soft material going in! 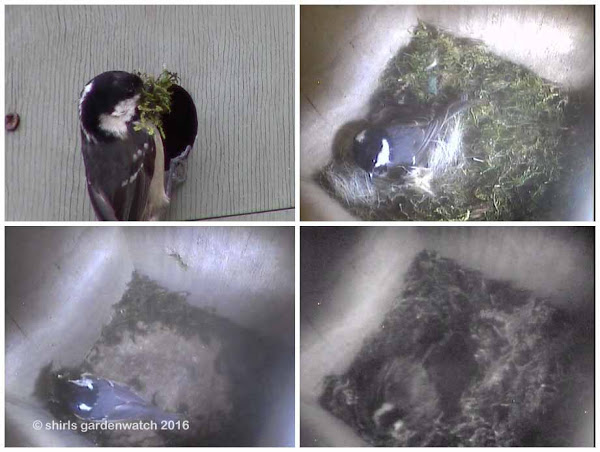 What a fast nest build – could we see egg laying tomorrow? I wonder 🙂

The garden feeders can go a little quiet at nesting time – the grab and go method is regularly used. The birds don’t hang around long at all. Fortunately the regular carrion crow mentioned in my last post has moved on. I stopped putting food on the ground to discourage it and it showed its colours by making a proper mess digging up between cracks in paving etc.

However, May is definitely not a quiet time in the garden, so much to see and do. I would hate not to have a garden. I must get out with my camera to photograph all the flowering plants for my records – if I can drag myself away from the nest box cam viewing that is! I’ve heard there is something called housework – I must find an ID for that as I don’t think it’s something I’m familiar with just now 😉

This post was published by Shirley for shirls gardenwatch in May 2016.

9 thoughts on “A great weekend of walks and wildlife”