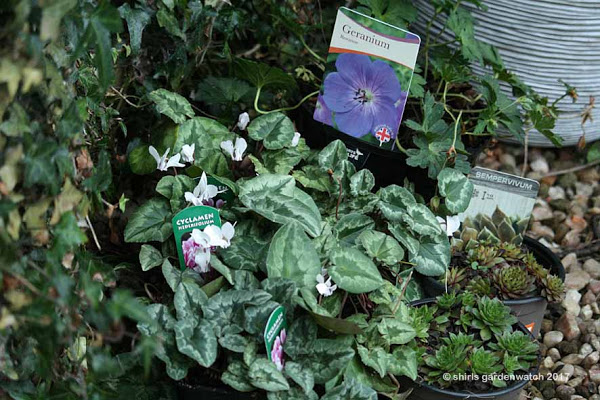 As it does, late the other night, one twitter/blog link lead to another. The discovery of a new blogging meme caught my eye. Six topics/plants, supporting photo/photos with a caption/brief piece of descriptive text sounded a fresh idea for this garden blogger. Mmmm.. but as many readers here might guess that was maybe a bit optimistic for me 😉

To find out more, should you fancy joining in today, or any future Saturday head over to today’s post at The Propogator and take a look at the Six on Saturday – a participant guide. As you will read there, although the host blogger is running it as a current weekly meme, any Saturday contribution is welcome. Memes like this, where you leave a comment on the hosting blog’s post for others to browse yours and you to view other participants, are a great way to discover new blogs. Happy browsing 🙂

So, all current as per the brief, here are my quite different six…

This should be confession time given my last blog post stated that this gardener could walk away from a plant clearance sales table. I omitted to reveal that this selection stayed in my basket on the previous week’s visit to this garden centre. I guess with the plants tucked almost out of sight I was able to forget my lapse. Truth be told, I didn’t have the heart to leave Rozanne on her own and the sempervivums so desperately needed rescued.

Quite appropriately for this first contribution to a blog meme with blog titled The Propagator I have propagation in mind for the perennial geranium ‘Rozanne’ which will be a first. I have this plant in the garden already (having successfully moved it too) so I am optimistic.

The ‘worse-for-wear’ sempervivums are heading to the greenhouse for some division and a creative display there! The pretty cyclamen, well that’s a different story having bought them before deciding where they will go. Ooops, I’m still undecided!

2. A CASE OF HEUCHERA RUST? 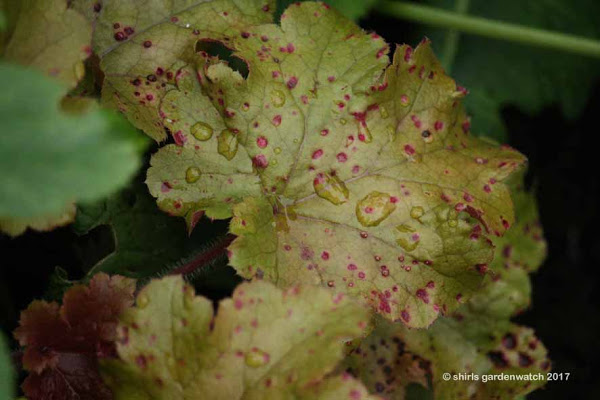 This would be the question I asked on Twitter late last night. Thanks go to Vicky & Richard Fox at Plantagogo who sadly confirmed my suspicion of rust on heuchera ‘Marmalade’ above. After many, many years of growing heucheras in my garden borders, all my lighter coloured ones have various levels of rust. There are a lot too as I have divided and replanted as the years have gone by 🙁

2017 hasn’t seen a dramatic change in weather conditions here, so I’m guessing the more dense planting in borders has not allowed enough air flow through (keeping the ground damp perhaps) and been at the root of the problem. So the plants will be pruned and moved and with this the new opportunity of finding more suitable ground cover plants for the affected areas. I’m ok with that part 🙂 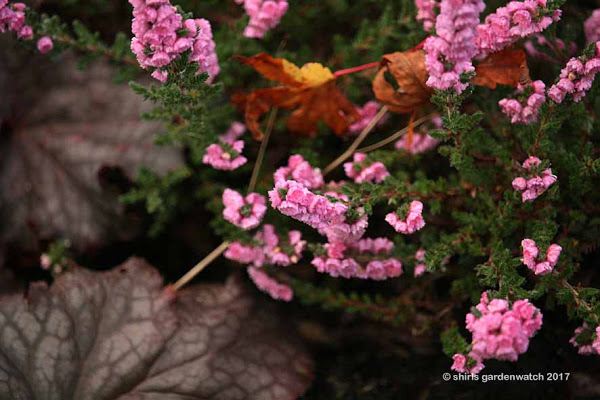 That would be the heather Calluna vulgaris ‘Peter Sparkes’ that was bought as a plant for wildlife. Attracting Bullfinches to his seeds after flowering, during winter months, was the plan after seeing a feature on BBC Autumnwatch with Martin Hughes-Games on a Scottish moorland (sorry, failed to find a link).

Although no heather feeding Bullfinches have been spotted yet, this gardener is happy that Peter has kept himself neat and well behaved in the border and his beautiful deep pink flowers are great to see from the gardenwatch window. If you plant it they will come and I’ve been patient for a few winters now 🙂 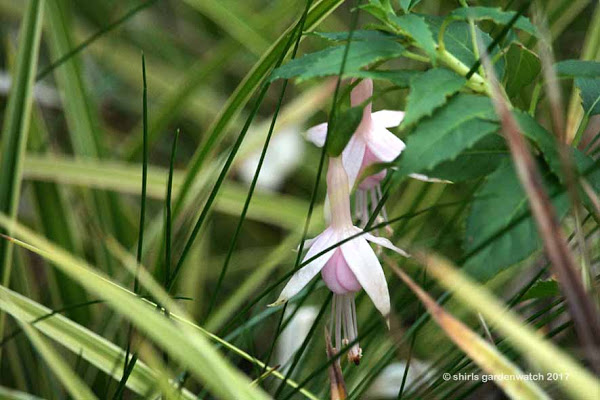 That would be the Fuchsia ‘Mrs W.P. Wood’. It should be said, that this gardener is no more a fushia fan than a heather fan but many plants do make their way to her garden for sentimental reasons and Mrs Wood ticks two boxes there.

For those that don’t know the habits of this gardener, she likes to move plants around. Mrs Wood appears to be a tad shy in her new pondside location, maybe when she gets to know her new neighbours she’ll come out of her shell. 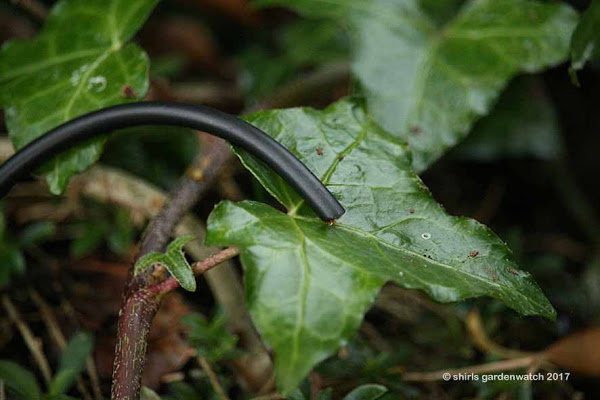 That would be a break in transmittion in terms of evening gardenwatching sadly. Regular blog visitors will know that this garden has a basic IR camera inside a hedgehog feeding station. Many images have been shared over the years. We apologise for the break in autumn service.

Note to self and all other gardeners, perhaps pruning in the dark with long handled pruners on a rainy, windy night with a torch in the other hand isn’t such a good plan.

Long stems of ivy had made its way into the feeding station. The gardener should have dealt with it in daylight! This isn’t an easy fix either, involving wire going through house walls, but hopefully the resident garden technician will be able to deal with the problem soon.

6. WEDDING MOMENTS WILL LIVE ON 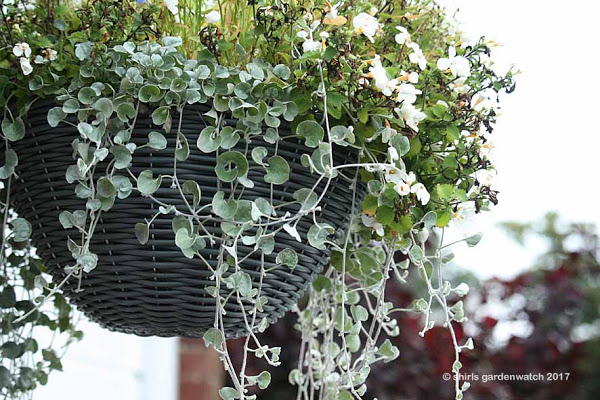 That would be at the front of the house, where hanging baskets were planted up with a bit of a wedding colour theme for the gardener’s daughter’s late summer wedding. Hanging baskets were a new feature for 2017. As can be seen above, they are winding down now but a full container planting of the trailing Dichondra Silver Falls is absolutely on the cards for 2018 🙂 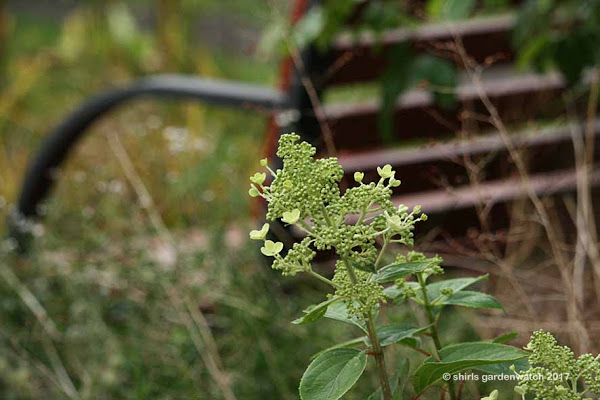 That would be my daughter’s wedding dress and the day she picked it. A refreshment stop at a garden centre after, an impulse buy by the gardener to mark the special occasion and another plant not usually picked by the gardener makes its way in. Sited in a partially shaded garden, this compact (height 75cm) Hydrangea paniculata ‘Magical Himalaya’ should grow happy ever after 🙂 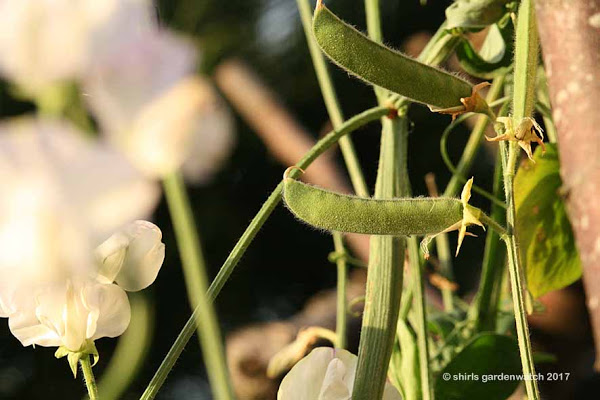 That would in the sweet peas that were grown in the garden for decorating the gardener’s daughter’s wedding ceremony arch. The variety chosen was ‘Albutt Blue’ and it worked a treat. There were a few planted in containers that are past their best now, but these garden border grown ones above will hopefully set good enough seed to sow for flowers again next year.

Once again, not a plant this gardener usually grows but with their scent and other sentimental connections it was a very good choice indeed 🙂 It’s good for the gardener to look further than the usual plant suspects, it’s good for the blogger to look further than the usual blog memes too. This one has been fun, although it’s grown a bit in length from the set brief suggestions and her initial plan. Ah well, it’s good to try something new and to spread the links to other bloggers brave enough to host a blogging meme.

This post was published by Shirley for shirls gardenwatch in October 2017.

9 thoughts on “Six on Saturday: New to me”