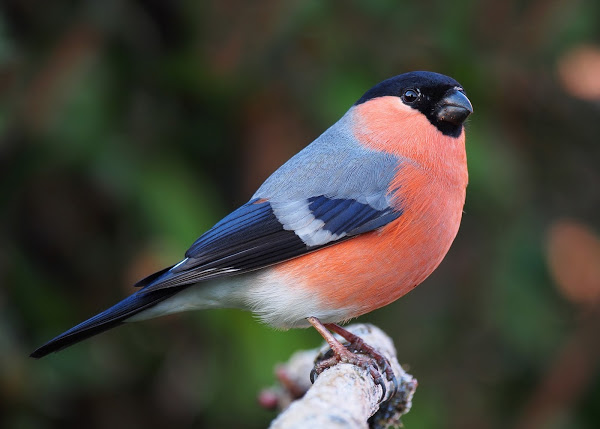 Last Sunday saw a fantastic colour splash from a bird that has never been counted from this garden during the RSPB Big Garden Birdwatch! Last September saw sunshine through golden Acer leaves and a late garden nest build never seen either – any guesses there? I’ll leave you thinking on that for now.

The Bullfinch had been on my garden wishlist for some time now – the stunning male in particular. I can’t believe it flew in landing on my popular Acer tree along with some blue/great tits during my count. What luck! On odd occasions I had seen it eating berries from a distant neighbour’s tree – only a few times though. My OH and daughter had reported a couple of garden sightings to me before I saw two very brief ones myself. It has never been seen feeding as yet, perhaps one day I might be able to capture some video/photos but until then… 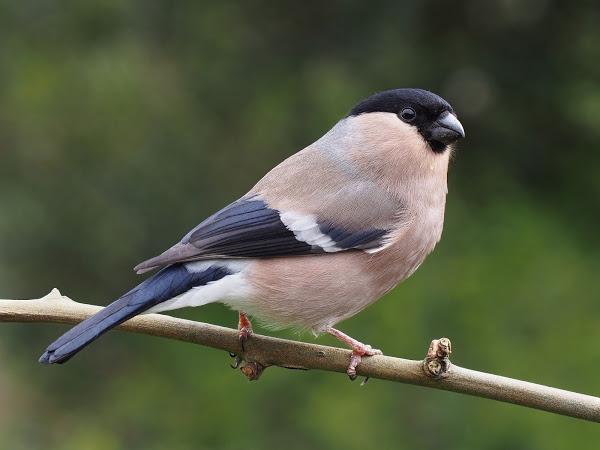 A flash of yellow from Siskins was spotted during my count (2x male, 1x female) and to encourage them and perhaps redpolls again a new larger nyjer seed feeder is hanging now. From past experience, this food takes time to be discovered (almost a week on and no takers) but when it does it will bring in a great variety of visitors.

Woodpigeons, closely followed by Blackbirds, should have topped my garden list last Sunday and they did appear, but only just (Woodpigeon x1, Blackbirds 1x male & 1x female). Although numbers weren’t high I was delighted to have a good species count of 13. It was great to be at my window again and be able to see what species are visiting just now.

Maybe the Starlings had been deliberately spreading their numbers around the gardens to show things are on the up for them now. They certainly had me looking up to the skies in the evenings over the weekend. They swooped around from side to side, shape shifting over the rooftops and around the mature trees I can see from the garden. Serious show-offs for the birdcount they were, as my count was over and there’s no way I could have counted a murmuration!

Starling murmurations are just fascinating to watch and I got a real feel for speed as they went low just above my window – wow what a delight that was! There were two groups that I saw swooping around but probably many more joined later in open spaces away from the houses. A real spectacle this behaviour is.

As mentioned above, currently it is the Woodpigeon that more regularly takes the highest number of visits to our garden. They’ve even discovered how to feed from the squirrel feeder. I’d say they were almost at the point of nuisance at times but OH and daughter love to watch them. In past summers this bird has built and added to a nest space hidden in the ivy above my pergola. Eggs have been laid too but I suspect magpies discovered where they were.

Why on earth then did a pair of woodpigeons decide to build a nest in the open, central garden location of a small Acer tree about to drop its leaves? Back on September 17th 2017 the bird feeders were in need of a top-up and when out filling them up I spotted this surprise late nest build and set up the video camera on a tripod and left it running. Below is the capture that caught my eye where the male gave the female some taps of encouragement. The focus was set to auto so moves out and in a couple of times.

Could Woodpigeons actually successfully raise chicks late September in Scotland? I had no idea, although fun to think they could, I had concerns. This late build was in far too open and busy an area of the garden and after much hurried activity over a few days it was deserted. This woodpigeon pair may have been successful elsewhere but I’m so glad they moved on as strong winds soon after this footage was taken shook the thin acer branches and broke-up the nest. Now, I really don’t want them returning to this vulnerable tree in 2018.

So what are the real top birds in your garden just now? Have you had any surprise sightings recently? It’s very clear by watching the garden just now that birds are pairing up. We’ve definitely got the blue/great/coal tits visiting in pairs. Three robins are around at the moment too and two are definitely ok feeding near each other suggesting a pair and there is a chase on with the other. Have you seen any nesting activity yet? What about nestbox viewings? We’ve seen Blue and Great tits viewing ours – they always compete for this one.

Looking out to the garden borders now and spring bulbs. How are yours doing? Have you any surprise sightings of flowers? I must get out in the garden over the weekend to take a look. Oh dear, reading this over I see I’ve asked a lot of questions this time! Sorry 🙂 Wishing you a great garden and wildlife weekend!

This post was published by Shirley for shirls gardenwatch in February 2018.