Early February saw the male Bullfinch return to overlook the garden from a neighbour’s tree. From there, this fine sunny day, he dropped into the garden and explored the ground. He stayed a while, perching on trees and shrubs. What a delight to get such a close-up view of such a colourful bird. I’ve been waiting for this for a long time. This was just the start of some fantastic gardenwatching for 2018!

As always, during cold spells of winter, fat filled half coconuts get hung around the garden. They are well received by a variety of birds. Blue, Great, Coal and Long-tailed tits, Blackbirds, Starlings, Magpies and Carrion crows were all seen feeding on them as was the Robin. 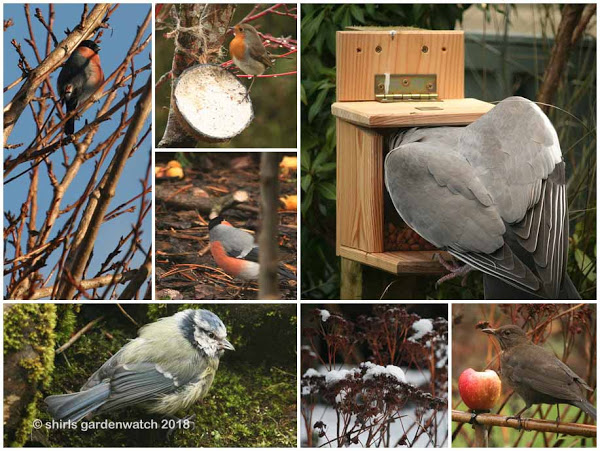 A grumpy looking Blue tit caught my camera eye, it was a bit scruffy but a closer look showed that its beak was not as it should be with the top bill being longer and overlapping the bottom. No wonder it was grumpy. It seemed to feed okay so that was good to see.

A Woodpigeon (or two) discovered how to get to the peanuts in the squirrel feeder. Snow came and went and I was pleased I didn’t cut down the sedum stems last autumn. I liked their snow topping look. Apples continued to be offered to tempt possible passing Fieldfares and Waxwings, the Blackbirds and Starlings enjoyed them.

As everyone here in the UK will remember, February saw some serious snow flurries and extensive drifting. We were advised not to travel unless an emergency. We were familiar with snow conditions here in Scotland, but this was a whole new level. Our area was issued with a red alert weather warning by the Met Office – a first for Scotland. There was major disruption throughout the UK with areas in the far South getting high levels of snow too. 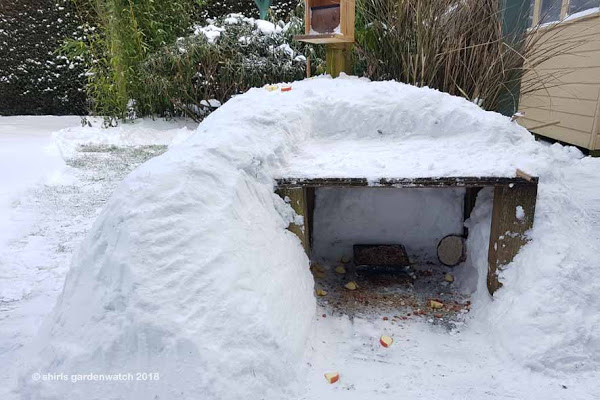 Out in the garden, snow being blown about in all directions covered low bird feeding areas. This prompted the building of a snow igloo-esk structure. Birds were appearing nervous out in the snow for fear of predation but some Blackbirds and a Song Thrush discovered and used this new enclosed food station.

The jumbo, 12 port seed feeder with sunflower hearts didn’t see much business with the smaller finches. Winter conditions usually brought them in large mixed flocks but they were nowhere to be seen. This was unusual, I was worried for them. I was delighted to see them reappear in this last week. Good numbers of Goldfinches and high numbers of Siskins were seen. More apples were put out, just in case… 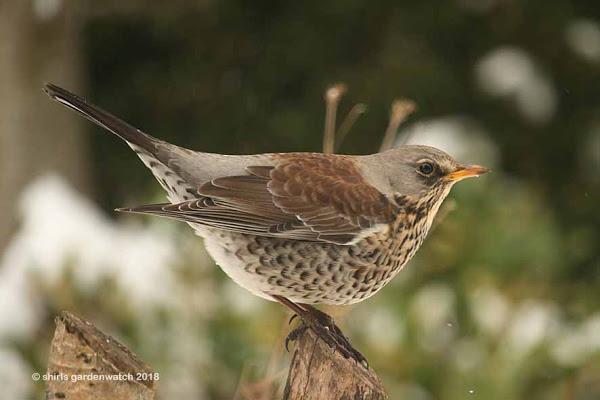 Yay… Fieldfares, seen above, arrived on March 3rd. The snow was still with us and the colourful apples must have caught their attention. I was thrilled! A large group landed on my neighbour’s tree overlooking the apples. In previous Winters, we had seen an odd single Fieldfare come in to feed on apples but this was a group of at least 20. They bounced excitedly around the branches of this tree before beginning their descent down to the garden. However, all didn’t go to plan.

The apples already had a regular diner, apart from the Blackbirds and Starlings and this bird was becoming very possessive of the 20+ apples on offer, chasing others away. I originally thought it was a Song Thrush until I saw this behaviour and the size difference with other birds. A Mistle Thrush, one bird, was to stop the Fieldfares feasting on the apples I put out to attract and feed them.

The Fieldfares began their descent. They were running along the top of my hedge, dropping down to my homemade feeder tree structure and bouncing through garden trees and shrubs beside the apples. The Mistle Thrush, seen below,  wasted some considerable energy chasing them. It was hard to believe that this one bird stopped a group of birds feed. It did and successfully too. 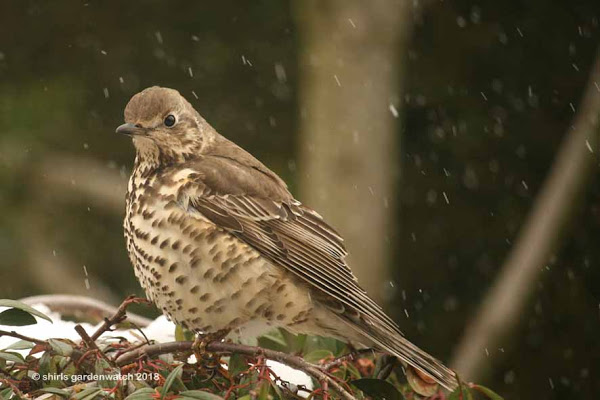 The main group of Fieldfares finally gave up and flew away. Aww… it was still fantastic to see them all. A few more determined ones stayed and landed around the garden watching and waiting but the bossy ‘King of the Apple Castle’ spotted them and the chase was on again. The Mistle Thrush continued to patrol this area of the garden with almost Sparrowhawk like body language and fed like a King. I did see odd Fieldfares get to feed when the Mistle Thrush briefly moved away but what a wasted food opportunity for the group.

Earlier on my, deep snow, walk to the Supermarket to get more apples I had spotted Fieldfares bouncing through gardens in search of berries. They were fun to watch as they travelled down the street alongside me. So I knew they were in the area before they arrived in my garden.

Now that the snow is as good as all gone, as I said above, large groups of Finches (especially Siskins) have been attracting my attention at the feeder tree. They have been seen squabbling with each other and the seed is running down fast. It has been great to finally see the larger nyjer seed feeder get used too. The bossy Mistle Thrush seems to have moved on too, a good number of species are visiting just now and the garden is getting very busy again. Great to see and just when I wasn’t looking for new garden visitors, they came, some very special ones too… 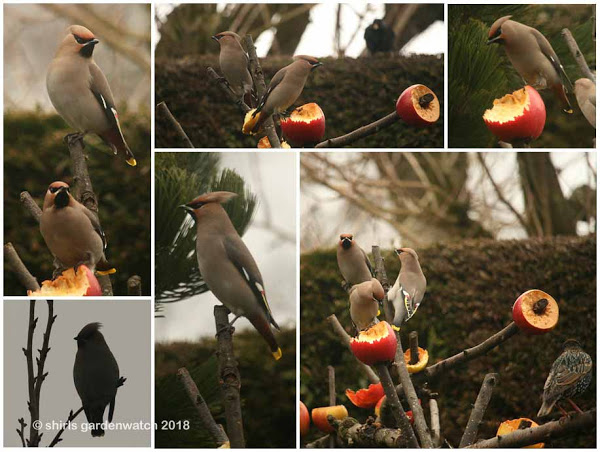 What a shock it was to wander into the kitchen to fill the kettle on a dull Tuesday morning to look out the window to see three brownish birds I didn’t recognise as regulars, feeding on the apples. Then I spotted what looked like a prominent crest!! Never, ever, expecting to actually see Waxwings feeding in my garden… there they were! Wow, just wow.

Walking swiftly through to my gardenwatch window and slowly towards my camera, I got to it in time which was brilliant as often I don’t get to it in time. However, these birds weren’t in a hurry to move and I got some garden record shots of this fantastic moment of gardenwatching, like having red squirrels visit, I could never have imagined I’d see in my small town garden. I also had time with their visit to just quietly watch them. What a privilege and delight 🙂

Was that the first day Waxwings had been feasting on the garden apples, that I didn’t know but I was so very lucky to be at home and look out the window at the right time to see these ones. I still can’t believe it. Did I see them yesterday morning as I filled the kettle, no I didn’t but I did spot another first for 2018… 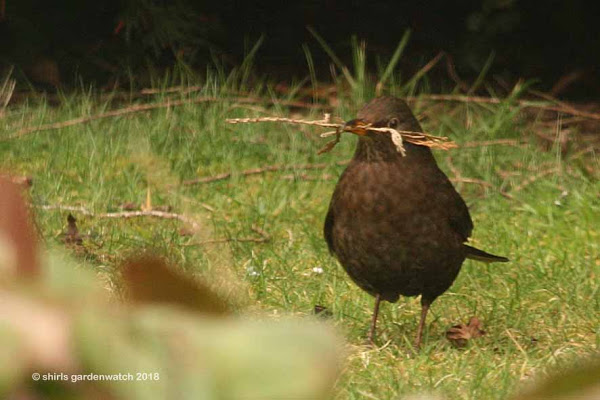 So there we have it, the nesting season has officially begun in my area with the Blackbirds. This female Blackbird was collecting blades of dried out ornamental grasses. She’ll find a lot of them around too as I haven’t been tidying up. I need to get out in the garden to lift the flowering bittercress weeds and get some pruning done but I will leave dry prunnings in corners where the birds will be able to find them (like under my hedge).

Aware that today is also Garden Blogger’s Bloom Day, I nipped out to the garden last night to see what flowers I could spot with the help of outside lighting. Happy GBBD to everyone taking part! That’s the garden flowering season properly started here too with Spring bulbs, Crocus, Iris and the wonderful Snowdrops and Snowflakes (my preferred kind of snowflakes) and Hellebores. 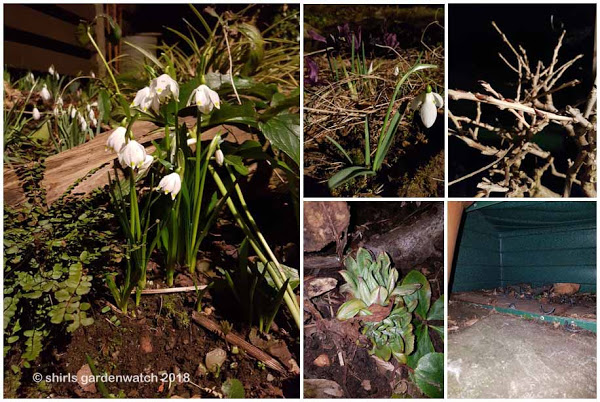 Oh dear… I see I’ve forgotten to prune my wisteria! I will get to that over the weekend, pruning all healthy stems back to two sets of buds. After many years this pruning has reliably produced flowers which I never cease to get delighted to watch open. The bees are happy to see them too 🙂

Also, Hedgehogs have been spotted out and about in March in previous years so I need to sweep out my hedgehog feeding station and put out regular food and fresh water in the evenings to help them put on weight after their winter hibernation.

Wow… it’s all go now for the gardenwatch year! Another job for the weekend is emptying the camera nestbox (after a deserted, part nest build last year) so that prospective tenants for 2018 can view it in earnest. The seasons of a garden have much to keep our interest that’s for sure. Enjoy yours!