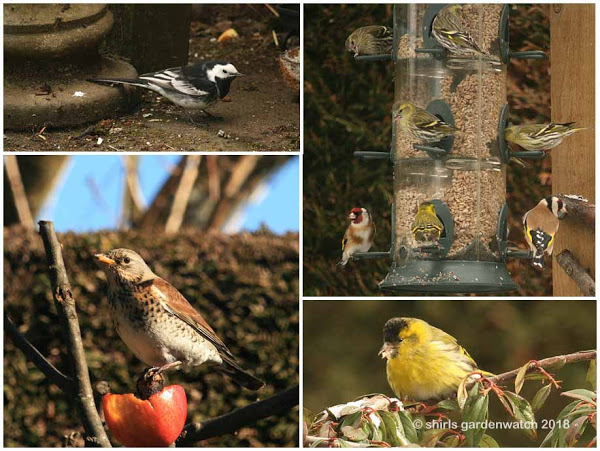 Outside the window, a bobbing tail of the mostly monochrome Pied Wagtail waved, as if to say “Sorry, I missed last week’s photoshoot deadline for infrequent or new garden visitors during winter cold spells”. No worries, you can join the Siskin Party that rocked the garden over the weekend that followed! Why is it though, happening countless times, does a visitor like you appear after I hit the publish blog button?

Counting guests to last weekend’s Siskin Garden Party was challenge. A serious challenge. I eventually admitted defeat when they were in the garden as they constantly moved everywhere from feeders, trees, shrubs to along the ground. Taking off en masse I might have ‘guessedtimated’ 60+ easily.

Feeling like I was watching a nature, celebrity television programme, I focused my attention on the ‘Who’s who’ garden list. Not featuring, were passing Waxwing and Fieldfare groups of last week. They probably took one look down over the garden and said to themselves, too crowded and too much commotion for us!

In the absence of the ‘King of the Apples’ Mistle Thrush, a single Fieldfare gate-crashed the Siskin party. Halved apples were scattered on the snow so it, Blackbirds and Song Thrushes had a quieter area to feed. Yes, that white stuff arrived again. However, the Fieldfare didn’t mind mixing it with the Siskins and they didn’t appear to mind it’s company on the feeder tree either. They were probably too busy feeder queuing and squabbling to notice it.

Not surprisingly, other finch species were in attendance. Which ones though? The binoculars came out. Only a small number of Goldfinches were spotted which was a surprise as previous Garden Parties hosted by the Siskins were popular with good sized Goldfinch groups. The binoculars failed to spot Redpolls or Reed Buntings which have been seen at these popular Winter Parties in previous years. 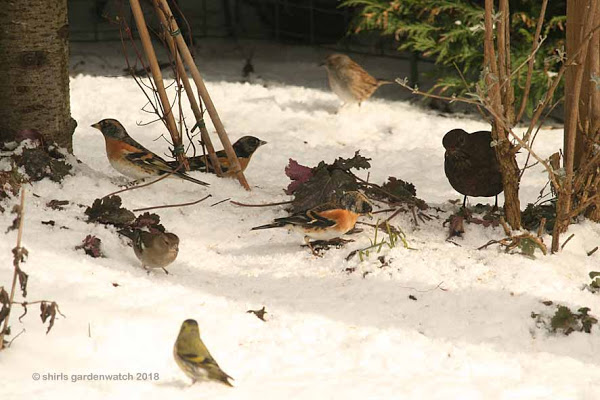 No binoculars were required to identify the male Bramblings at the party. It was a delight to see these winter garden visitors again. Spotting female Bramblings was a bit more tricky in a mixed crowd, in low light, especially when female Chaffinches and Greenfinches were around. Brightly coloured male Greenfinches and Chaffinches were spotted easily without the aid of binoculars.

Branches of the coral barked Maple tree are eye catching lit up by early morning sunshine. During the Siskin Garden Party, many guests used its branches as they passed through the garden en route to the sunflower feeders. One bird caught my eye. Camera captures made it look like it was playing hide and seek with me. Its markings weren’t too clear until she moved. Cropped below is my #photooftheday (photo of the day) of the very pretty female Brambling! 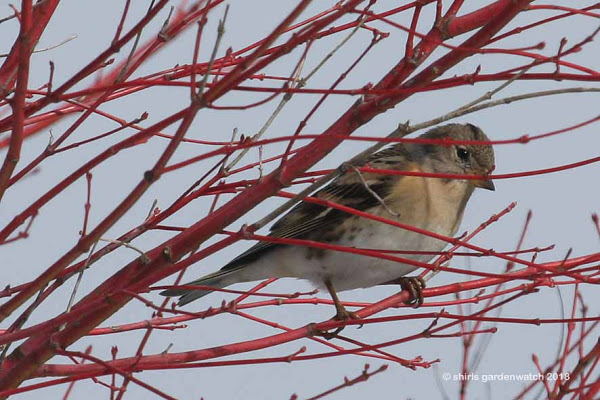 The usual garden species of Blackbirds, Dunnock, Robin and Woodpigeon joined the ground feeding party guests. It was great entertainment watching how they all mixed. There was less commotion on the ground below the feeders as seed, spilled from above, spread around more. Other garden regulars Blue, Coal and Great tits were seen joining the party feeding on peanuts as were Starlings.

When the Siskins took a party break a couple of Carrion Crow’s came feeding on fat filled, half coconuts as did the Jackdaw and Magpie. The feeders were busy all weekend with the large 12-port sunflower feeder needing topped up twice. The potting shed supply emptied, fortunately after the party was over. As commonly said of good parties – it was a blast! 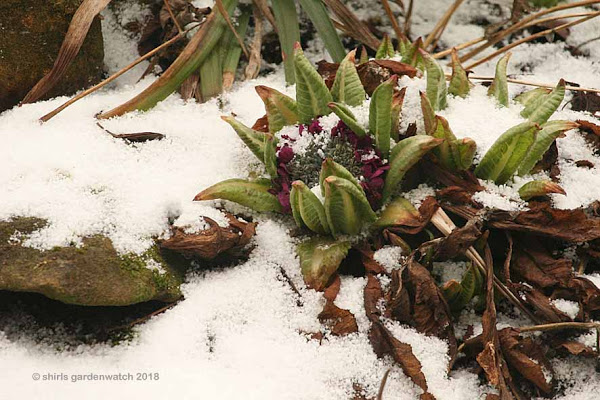 Unfortunately, winter’s current blast of cold kept garden jobs at bay last weekend. Although the snow has gone again, last week’s jobs are still unticked. Rain gardening is not unusual for here but gardening in the cold – nope, not keen on that. Taking photos of flowering plants was the plan for today too – nope, no point in taking photos on cold, windy days where nothing stays still – including cold fingers holding a camera. Maybe this weekend?

Wishing you a great weekend! I’m not thinking we’ll be having another garden party this weekend. In fact, I’m fairly confident on that. Why am I so sure? Well, today, the postman brought the large bag of sunflower seed I ordered earlier this the week. Gardenwatching experience tells me that when you are ready with feeder supplies, the garden goes quiet of visitors. Ah well, I’m sorted now for the hungry, hard-working nest builders – when they need more energy 🙂

Well there you go, it’s honestly happened again! I’m about to hit publish post and a little Wren (a regular that wasn’t seen at last weekend’s garden party) has just stopped on a branch perch outside my window. It’s bobbing up and down in a quite different way than the Pied Wagtail but the story is the same. Yep, you completely missed everything, both photoshoot and party I’m afraid 😉

6 thoughts on “The Siskin Garden Party”