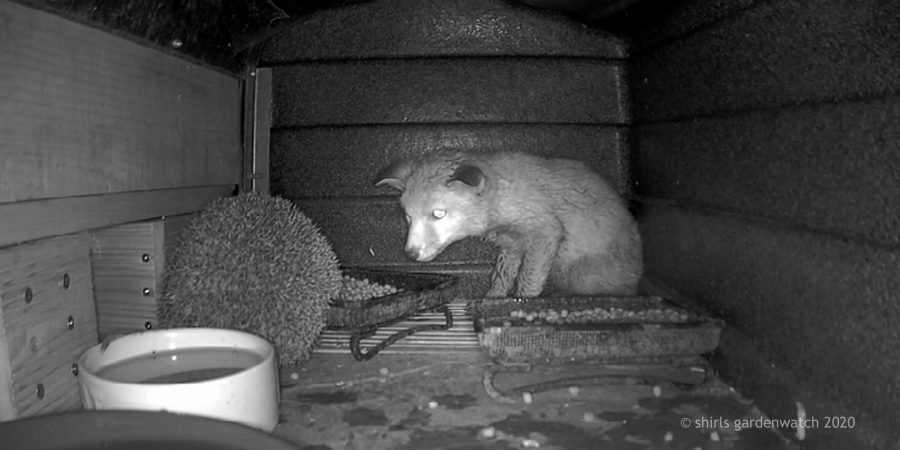 It has been fantastic to watch video captures of night time and early morning garden visitors. There have been quite a few surprises and the image above is not one I ever expected to see. The sounds coming from the hedgehog feeding station camera weren’t either and they stayed with me for most of the day. This really wasn’t the morning to listen to overnight footage with headphones on. I joined both the hedgehog and the fox in getting quite the fright.

The image above shows how small this fox cub was to get in the elaborate entrance chamber to the enclosed hedgehog feeding station, designed to stop cats getting in to the kitten biscuits on offer to hungry hedgehogs. Twitter help estimated he was just 4-5 weeks old and should still have been with his mother. On discovering a hedgehog feeding inside, instinct had it growling and trying to take a nip at it. I cringed watching, fearing for the hedgehog who stayed statue still for 20 mins. Being half in the food dish the hedgehog was unable to curl up to safety. It didn’t appear harmed and returned just 25 mins later.

The video compilation of the whole encounter shows a different story. Initially, not having seen the footage of outside the feeding station, my concern was very much for the hedgehog. Seeing the tiny fox smelling out the kitten biscuits from outside changed my view. Both animals were vulnerable here but the fox perhaps more so given its age. This feeding station has no lighting except for a possible low red glow from the infra red camera. The fox did appear to be seeing its way around but got spooked every time it approached the hedgehog and reacted to it. It didn’t try nipping it again.

The quieter sounds from the fox cub as it ate, or just sat in the corner, were the ones that haunted me all day. Yes, the growling part was horrifying to hear but the lost and alone sounds were just so much harder to listen to. It was a wet and cold night, at a guess this enclosed dry space was a good rest spot for the fox. After eating it appeared tired and just wanted to close its eyes. What was surprising was, that the fox began eating from the unoccupied dish but made its way to the dish that the hedgehog was partially in. Perhaps it was looking for company.

When the hedgehog finally decided it was time to leave, the fox wasn’t happy again. By instinct I’m guessing, the hedgehog knew not to make any quick moves. It ever so slowly turned itself around enough to head out the entrance chamber. Even when in it, it moved at a snail’s pace. Looking at the footage outside, I expected to see the hedgehog make a run for it, but it didn’t. A normal pace was seen.

The fox looked lost without its dining companion and didn’t remain in the feeding station long after the hedgehog left. It left by the tighter back door entrance and has never been seen since. I do hope it found its family group again and is doing well. Although I do fear something may have happened to make this young fox wander through the middle of a garden in search of food. On doing some research I discovered fox cubs are usually fully self-sufficient by Autumn but can stay with the parents to help with next year’s young. It really shouldn’t have been out alone, this young.

The video below shows excerpts of this encounter of a young fox cub and a hedgehog feeding. If you would like to view the behaviour and sounds made by the fox, please be aware of sound levels on your speakers especially as the fox enters. You will probably get a few frights and cringe at times too as the fox makes a variety of vocal sounds on its visit. It was a certainly an unexpected glimpse into nature, that’s for sure.

Out in open areas, hedgehogs and foxes can meet at feeding stations, they also encounter rats. Here are a few video captures from others: Fox And Hedgehog Feeding Together; Fox vs Hedgehog; The fox & the Hedgehog; Fox trying its luck with a hedgehog; Hedgehog & rats feeding together; Funny Rat causes Hedgehog fight and Rat & Hedgehogs fight. Here’s another fox cub, a bit older, visiting an unoccupied hedgehog feeding station too, Fox cub Hedgehog Box.

Finally, I’m not thinking fox visits to our hedgehog feeding station will be a regular thing. The entrances really are only hedgehog sized. How would I know if a fox passed through my garden again then? Quite literally, by poo droppings. That’s the way I knew hedgehogs did when they didn’t appear on camera. For my future reference and anyone else that is interested here are some great images of animal poo by The Wildlife Trusts –What animal poo is this? The gallery includes, poo from the fox and the hedgehog plus rabbits, hares, badger, deer, otters, American mink, watervoles, rats, mice, bats and there’s some owl pellets too.

If you have had unusual wildlife encounters in your garden, please do share them in a comment. Any fox and hedgehog stories would be great too.