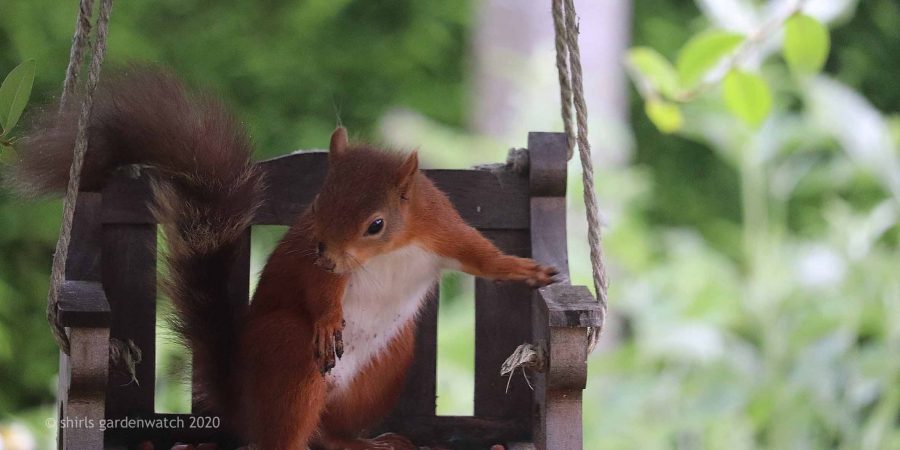 A red squirrel sitting just two metres away puts a whole different spin on social distancing. In a positive way for both numbers of this endgangered native mammal and a gardenwatcher living with someone on the shielded list. A garden supply of peanuts benefited us both back at the beginning of July. Social media is full of stories of people enjoying and making space for nature in their gardens and I’m definitely an advocate for that. Blogging opened my eyes to observing nature and continues to draw me in and wanting to know more.

What an absolute delight the red squirrel is to watch. So many expressions in its body and face. It even took time to peek its curious little face round the corner of my window frame to look straight at me, twice! We were nearer a metre between us then. Needless to say, I couldn’t get near my camera. Predicting the direction it will go with a camera in your hand is challenging when it is so incredibly light on its feet and changes direction.

Many photos were taken over a couple of days, selecting which ones to use was another matter. So, so many wonderful expressions. Selection picked, uploaded along with the first video below and I was ready to write the blog chat. Then I thought of blog visitors that don’t see red squirrels at all or in such close views so dropped all photos and uploaded a number of short videos instead.

The first video below was taken on the dry second day and this same red squirrel wasn’t in a hurry to hide the peanuts. I could tell it was the same squirrel by the pattern on its tail. It was relaxed and enjoyed eating where the food was, staring straight at me too. Woodpigeons are very keen on peanuts here and did wander down beside the squirrel but it didn’t budge and they walked off bemused.

The next four videos are from my garden taken on the rainy day one. The red squirrel’s visits to the peanuts were much shorter and it didn’t travel far in the garden to cache the nuts it collected. It was such fun to watch. One garden border was a problem for it though as I was heading out the next day to do some work moving a large shrub and it’s store was in the digging area. It’s coat was wet and got its face and hands muddy.

Taking video footage from indoors has the challenge of reflections from inside on the window. I use a black scarf along the windowsill which helps a lot but forgot about my tripod stand which was picked up a few times above. One thing that I can’t pick up though is the sound from outdoors when I’m indoors so my videos are often silent. I am familiar with the sound of a hedgehog eating but had never thought about the sound a red squirrel might make.

Not everyone is on Twitter (or Facebook) to read of the nature stories being shared there. Twitter is my social media place to go and there are some fantastic images to be seen there. So many wildlife enthusiasts and knowledgeable people for ID’s too. I enjoy the interactions I have there. I also enjoy chat in blog comments and since moving to WordPress have added a WhatsApp button especially for my Mum so she can now view my posts on her phone. She’s going to love listening to this next video and I suspect will view it a few times, so will I and I expect you will too. It’s a very, very special clip I spotted on Twitter by wildlife photographer Dani Connor.

Is that not just incredible to hear? Wow, great capture, Dani. But there’s more to this capture. A bigger story. You can read about it in the longer video, just under six minutes, that was shown online on one of the daily Self-Isolation Nature Livestreams with Chris Packham and his step-daughter Megan McCubbin. These recordings began back in March and currently have 53 videos uploaded as of yesterday.

We all know nature can be harsh but this story turned around with some help from Dani. What an experience she had with these young squirrels, one she will never forget. It’s brilliant that she shared it too. I am delighted to be able to share it further here so more people can hear it. I enjoyed watching this through Twitter at the time and never remotely thought about sharing it in a blog post. Once I began uploading my garden footage of a red squirrel this story came into my head and I felt I wanted to share it too. I’ll end with a second recording Dani made of a baby red squirrel. Enjoy.

This post was published by Shirley for shirls gardenwatch in July 2020.