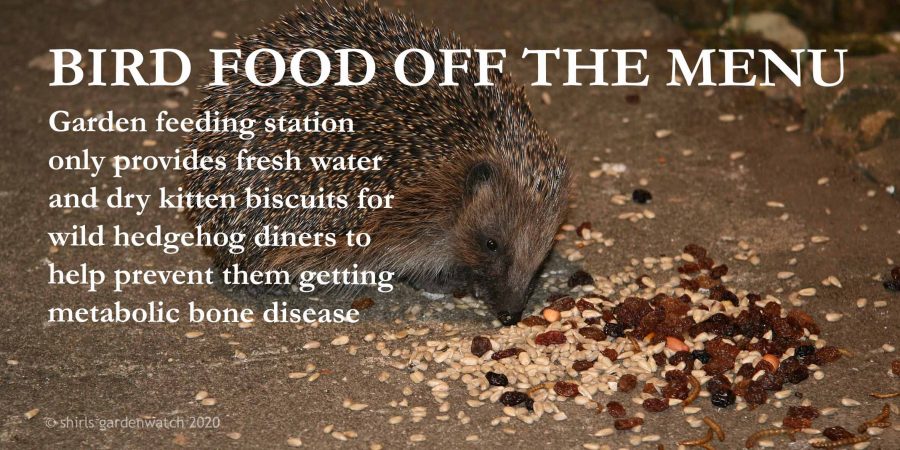 There was already an urgency in correcting information given on feeding wild hedgehogs in past blog posts dating back to 2007. A fairly recent awareness of metabolic bone disease in hedgehogs was something I felt a strong responsibility to highlight. Then, on the 30th of July 2020 the British hedgehog was officially classified as vulnerable to extinction. This is one massive step from being on the endangered list and very sad news for this very special, small mammal that is believed to have evolved around 15 million years ago. The time is now to update these old blogs.

First a tiny bit of important garden hedgehog history. We don’t actually know when hedgehogs first came into the garden but we become aware of them in 2007. Although not a completely wild garden, there are borders full of plants for hedgehogs to forage through. They have been seen rustling through them many times over the years. However, I suspect spilled food from hanging bird feeders helped put the garden on the nightly hedgehog routes at some point. Well before they started visiting garden feeding stations. I would also take a guess that this is very common.

For our newly discovered hedgehog visitors, I put out water and specialised hedgehog food. The food didn’t appear to be to the hedgehog’s liking. At least that was what I thought. So in order to help these endangered animals, I started experimenting with offering different foods like sunflower hearts, peanuts, sultanas and dried mealworms. I didn’t know I was actually giving hedgehogs treats which would mean that they were less likely to eat the hedgehog food or forage for their natural, nutritional diet in my garden borders.

Sultanas being bad for hedgehog’s teeth, didn’t occur to me either. It should have. They were eating the food I provided and I was very happy about it, old posts support that. I feel terrible thinking about this now. In my potting shed, I kept my special hedgehog mix in a container. I was so pleased with it, but I should only have been supplementing the hedgehog’s diet not changing it for the worse. For the last year, this container has held kitten biscuits (Tesco) which the hedgehogs do enjoy, a lot. Just note that biscuits are dry and a dish of water near by will be very much appreciated.

For the health of hedgehogs, please don’t be tempted to repeat my mistake by feeding hedgehogs bird foods. Yes they will eat them and return to your garden but it is at a serious cost to the hedgehog’s health. I really believed I was doing the right thing, there was no information available to suggest otherwise. Magazines and nature programmes included it as an option then. I should have persisted with hedgehog food or maybe cat/dog food but didn’t want to attract cats. I won’t be the only one there. This is where an enclosed hedgehog feeding station helps. There’s more on that below.

This gardenwatch blog is full of garden hedgehog records. This blog post was initially intended for the google searches that make their way to old blog posts and images showing hedgehogs enjoying bird food, to warn against it. Links to over 50 blog posts will be added to direct visitors to this update. I know most may never be viewed again but I want to make sure I can do all I can to raise awareness of metabolic bone disease in hedgehogs and the impact it has on them. This can be seen in the video below.

Information on Metabolic Bone Disease (MBD) can be found in this document by Vale Wildlife Hospital & Rehabilitation Centre. There are many hedgehog carers on twitter and this is where my attention was drawn to this condition. Thanks go to everyone there who is highlighting this serious issue for our, now vulnerable to extinction, hedgehogs. Other social media will be doing so too I suspect. Hedgehogs need our help more than ever now.

Thanks especially go @HedgehogCabin on twitter for pointing me in the direction of the document above by Vale Wildlife and the video below they uploaded to illustrate the problem further. It shows x-rays of hedgehogs with and without MBD and has chat discussing it.

In the current COVID-19 situation, along with all charitable organisations, wildlife rescue centres are struggling for donations. In fairness to the two that I’ve referred to in this blog post I’d like to include links to their websites. Hedgehog Cabin is absolutely worth a look through if you are interested at all in hedgehogs and the issues they face. There is a lot of information there including information on feeding hedgehogs. Vale Wildlife Hospital & Rehabilitation Centre has information on other wildlife as well as hedgehogs.

Leaving a dish of fresh water out for hedgehogs is recommended by all hedgehog rescue centres, carers and everyone that is interested in helping them. This is especially important during long periods of dry weather. I now have a wildlife pond with a shallow side, edged with stone so wildlife can get in and out. It has a camera overlooking it and hedgehogs can be seen safely drinking there.

I’d now like to welcome visitors being redirected by old posts showing my garden feeding stations. I no longer use an upturned plastic box with a 13 cm square entrance. I still use Hedgehog Manor which is the repurposed, hard plastic, rabbit hutch but is sited, partially buried, into a garden border now. Dishes of fresh water can be found there as well as food. For a few years now, I’ve been watching hedgehogs through remote IR cameras that trigger movement, outside and inside it. I particularly enjoying watching Live at my PC, late evening.

Dried mealworms, sultanas, sunflower hearts and crushed, unsalted peanuts are no longer on the menu in Hedgehog Manor. It’s dry kitten biscuits with sides of fresh water now. Quite basic sounding perhaps but, with a good percentage of protein, this food has good nutrition for hedgehogs to supplement their natural diet. Unfortunately, stopping neighbourhood cats diners spraying before they left became quite a problem. This was a long and hard battle that I very nearly gave up on, but I didn’t.

Hedgehog Manor eventually lost its open door policy. It became an enclosed dining establishment with an elaborate entrance chamber. The smaller cat, the most persistent, still got in. The next step was to try a suggestion given on twitter. Gosh, this was a great tip (probably @HedgehogCabin and a few others that agreed). I wish I had known this earlier. I spent many, many hours trying a wide variety of solutions.

For anyone else trying to stop cats getting in a hedgehog feeding station, two small terracotta plant pot saucers, filled with water, is all it took. Two small terracotta plant saucers! The dishes didn’t need to be made of terracotta or small but that’s the size that worked here. Water was the key. It’s position, outside the front and back entrances, was the solution. It worked!

Via my cameras, I’ve watched hedgehogs walking through the entrance dishes of water without any issue at all. Maybe even taking an extra drink on the way in or out. It’s been very interesting watching the cats attempt to go past these little dishes, that fit just inside the tunnels. Although I do have a ‘moment’ every time they try, but they just don’t go past the water. They are still seen bending their heads down to the the water dish, trying to move inside but quickly retreat not wanting to get face/tummy wet. What a simple solution. It’s brilliant!

This post was written by Shirley for shirls gardenwatch on August 5th 2020.