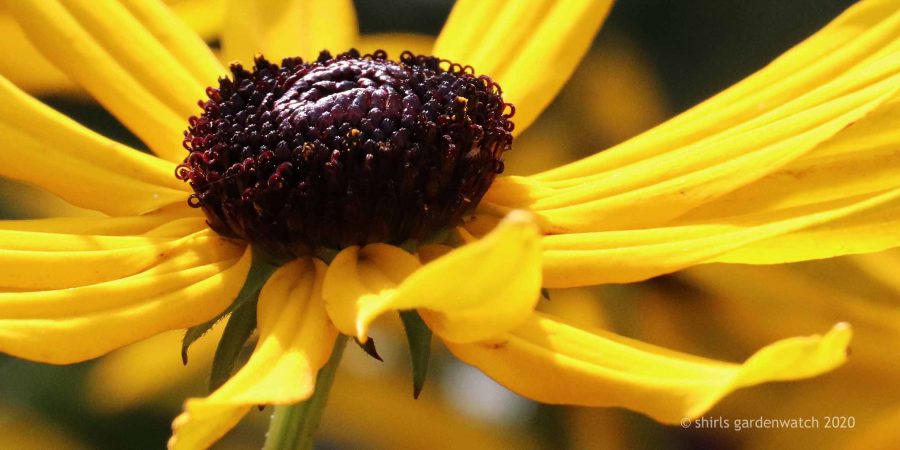 Rudbeckia Goldsturm and the perennial aster, Little Carlow were just glowing in the early morning sunshine yesterday. They may flank a slightly taller buzz series purple Buddleja, but they are currently the garden border highlights along with hedgehogs foraging below at ground level. I do love September. I know Autumn is knocking on the door, but I can still feel the energy in the garden when I’m in it. September air is refreshing, the light wonderful for taking photographs too. It’s a great month to be outside.

It’s also a month for assessing garden borders too, after the necessary tidy-ups, pruning etc. Taking photos of what was growing where is useful too, especially when plants get moved around as I do. I need these records. Looking back on these images over the winter months, along with other captures throughout the year, is great. Satellite tagging on my garden plants would make interesting records that’s for sure. Like the ospreys returning to their nesting sites, my plants travel around the borders, often returning to where they first started too.

Back at the end of August, just after dusk, my eye was caught to movement under a small tree outside my gardenwatch window. A hedgehog was foraging, brilliant. No so good was that peanuts had been in a feeder above (for red squirrels) at one point (no longer there). As bird food is harmful to the hedgehog’s diet, when it left, I put out some kitten biscuits on the rock the hedgehog was seen on. No peanuts were there, I didn’t expect to find any. However at some point in the past, this hedgehog did. It returned to eat the kitten biscuits, yay.

September 1st saw the start of nightly gardenwatching from the window. Hedgehogs were visiting the enclosed garden feeding station (further away) but I was now discovering others were foraging in the border opposite my window too. One night five hedgehogs were in the garden at the same time. Fantastic. It’s addictive viewing, time for blog visiting and posting went out my gardenwatch window and PC monitor screen. It really is hard to walk away.

The next morning it’s the viewing of overnight recordings on IR cameras. This is great, but the live watching with these cameras is even better. Better still is sitting just watching out the window, the hedgehogs were very close. Another covered, but open, feeding station was added just outside my window. It got interest too. A low level outside light was left on. Hedgehogs were taking the food and returning. Yes, a cat showed interest too, but I could knock on window to chase it off. Overnight, the cat feasted, but I found places like the cracks in paving that the hedgehog could get at but the cat couldn’t.

The blogger and hedgehog enthusiast kicked in now. It was some time since I had taken any colour images of a hedgehog. Most images I had were grainy, being video screen grabs, or the odd phone image when I discovered a hedgehog when putting out food or water. I didn’t want to go outside and disturb the hedgehogs eating. They would probably run away. My plan was that once I could see the outline of the hedgehog feeding on the rock and it had been feeding for five mins at least, I switched off the light beside me and asked a family member to put out the main garden lights. As suspected, the hedgehog wasn’t disturbed by it and carried on eating.

For the image below, my camera was on a tripod, set on auto and continuous mode (no special settings). I just kept pressing the trigger. The captures were slow and images blurry, all except one. It got a brief pass over through Photoshop to sharpen it a little. I was delighted, I had a new colour image of a hedgehog visiting the garden. That heather wasn’t in flower when I first spotted this hedgehog here. What a bonus that was, adding a bit more colour. I was to discover at least two hedgehogs ate from this rock.

Feeding and watching hedgehogs in the evenings is even more special with hibernation just round the corner. When do they actually hibernate? When will they stop coming to take food from garden? Questions I don’t really know the answers to. Weather will be a factor. Perhaps they have internal clocks like birds looking for hours of daylight before beginning to build nests, but in reverse. This month has been a fascinating one and I look forward to seeing if the hedgehogs will continue to visit during October.

September saw us add more garden cameras. Four has become six now and the PC monitor and can display all six together. You can imagine how distracting this is when on the PC trying to do anything. Its a great distraction to have though, we are very lucky to have it. As mentioned previously, number 5 camera is opposite bird feeders. We haven’t experimented with it properly yet. This one will be especially good for bird visitors during the winter months.

Number 6 camera was going in a new larger hedgehog house that we were going to build. I’ve since had a rethink on that and have bought a pre made one which I’m looking forward to placing in the garden soon. It’s more important that hedgehogs survive hibernation, than I have access to images. The house I picked is recommended by hedgehog carers. Number 6 camera has been given a name, the only camera that has, Rover. The new plan for Rover is as a roaming garden camera. It will have different views depending on what is going on in the garden at that time. What fun this is going to be throughout winter too.

I just love the pose the hedgehog above has taken. You’d think I’d asked him/her to stand there especially. Brilliant. I’ve never found them to stand still long after they have eaten. They often run off. Unfortunately, a lot of interesting footage I captured has run off too. Operator error. I’m gutted. I thought I had sussed what I was doing in storing the video captures. I was filing them away to upload them to video software I am still learning with too. I unknowingly had deleted much footage I wanted to use.

This new blog has had me on a new learning curve throughout, please bear with my infrequent longer postings and spurts in blog visiting. I’ll get up to speed properly during the winter months. Next time I hope to share video captures. Maybe of hedgehogs visiting the new hedgehog house? That would be great, September has time yet for more highlights. Please share yours in a comment 😊

This post was published by Shirley for shirls gardenwatch on September 24th 2020.