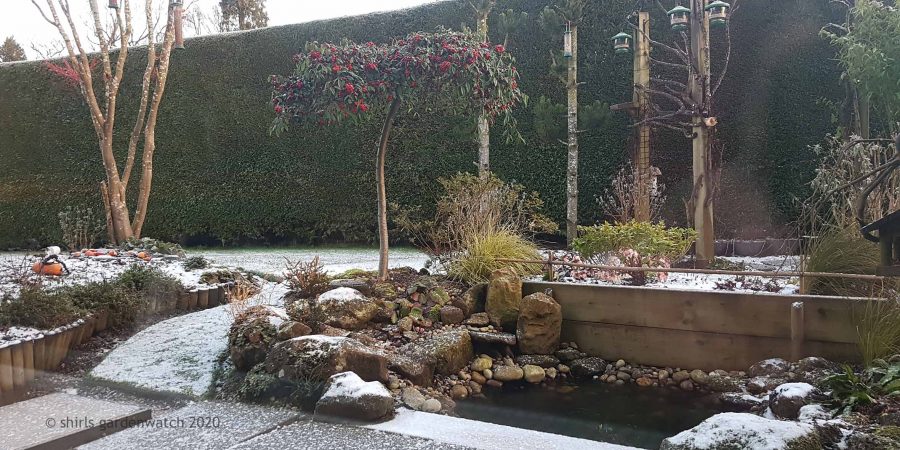 Historically, previous RSPB Big Garden Birdwatches haven’t reflected regular gardenwatch counts here. The birds appear to go into hiding. However, this year there was a risk of a cat being in hiding. Where you might not expect too, the top of a well kept leylandii hedge. Feathers still decorate the area from the last time. I had spotted our hedge bulge out, half way up , shortly before a black cat’s head came out the top! I don’t know who got the biggest shock. Wandering woodpigeons up there, scattered. Did it pull any under, it was hard to tell in the kerfuffle.

I’ve often wondered if birds see scattered feathers as danger and avoid gardens seen with them in it. I had seen feathers on the top of other sections of our hedge previously, assuming it was the work of a hungry sparrowhawk. They have been seen feeding up there. Fortunately, for this year’s count, a fresh dusting of snow camouflaged the white/grey feathers on the deep green hedge, as can be seen in the window phone capture above.

As the garden has been spookily quiet this month, I wasn’t holding my breath for a big number. Saturday’s count was seriously low, so I tried again this morning and it closer reflected recent visitors to the garden. For a change I’ve used a slideshow for the results. The species count for 2021, in the garden, was eight. In addition, jackdaws were seen flying over, woodpigeons, crows, gulls and good sized groups of starlings were also seen in distant, large trees.

Long-tailed tits took top spot here in the garden, a smaller number than usual but they appeared to be counted which was great. They have been an absolute delight to see throughout this month and have become fairly regular in their visits too. A camera was put up in a sheltered feeding area of the pergola especially for them, they found it too. What fun to see them buzz around the garden. I particularly like to see them feeding together – when the blue tits stop chasing them away. Curiously, the blue tits feel the nest box is under threat when they visit and quickly occupy it until they leave.

Fuller chat on all the birds that have been seen visiting the garden, can be read in THE BIRDS page above and show the RSPB Birdwatch v Gardenwatch species difference. A staggering 55 have found there way to our garden, albeit not all on a regular breakfast gardenwatch count. Truly amazing, I could never have guessed this when I put the first feeders up for our daughter’s school bird project. It’s been absolutely brilliant to get a chance to see them all here in the garden. I’ve included the slideshows for the page above here, the first one I named as the main cast and the second as the extras.

We might guess, given more awareness of the value of nature in our lives this past year, the number joining the 2021 Big Garden Birdwatch will be higher than last year. This would be a positive outcome for both the people taking part as well as the RSPB, the more the merrier in this case. All counts, even ones as small as ours, are valuable in this survey about how our garden birds are doing. The date to submit your results online is 19 February and by post 15 February. From memory, its late March when the RSPB officially publish the full results. If you took part this year for the first time, I hope you enjoyed it and do it again next year.

This post was published by Shirley for shirls gardenwatch on January 31st 2021.