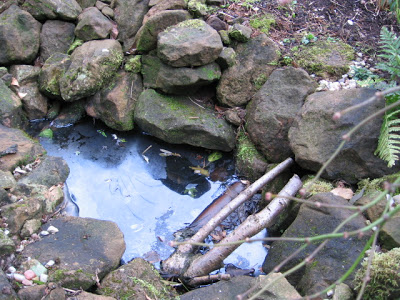 I have a small (tiny) pond that I have recently noticed having, on the surface, what appears to be residues of oil. I have also noticed, in the last couple of days, a visiting blackbird with greyish markings on its back – it really looks like it has been swimming in oily water! Unusual white markings on the blackbirds may be a condition called partial albino – I’ll come back to that in a future post.

The surface of my pond, shown above, as you can see does appear to be oily. I didn’t connect the condition of the water in my pond to the blackbird until this morning. I had a number of blackbirds visiting – and they were using my ground level bird bath queuing to get in! Then it occurred to me that although I have not seen a blackbird on the log bridge of my pond drinking or taking a bath – perhaps it has. I felt an instant sense of guilt that my pond could have damaged his feathers – although he did appear able to fly okay. 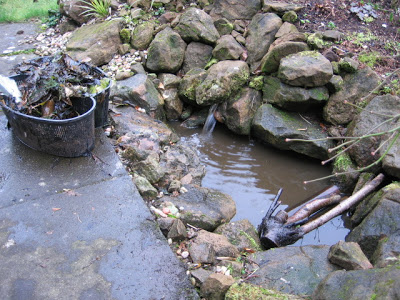 On went the gloves and out came the rake and bucket! I immediately thought on the cause of the oily surface – it was most likely to have come from the leaves that have blown in to it, decomposing and giving off gasses! When I think about this now I have seen this before – the funny thing is the condition of the pond water changes so quickly.

Soggy leaves I raked out first – getting as many as I could. Although the pond is small it is fairly deep and I almost filled two pond baskets as you will see above. I left the baskets sitting out near the pond so any insects could climb out and back into the pond. I didn’t see much in the way of wildlife at all – not even any sign of our resident toad. He was probably watching from one of the caves I built for him and the wren.

The blackbirds were definitely watching me with interest! I was most surprised, as usually when I am out in the garden it is the robin that will follow me in case I do any digging and disturb the worms. The blackbirds appeared to follow me dropping down quite near as I emptied the pond with my bucket. I refilled it with rain water from my water butts leaving some of the mucky water at the bottom so any living organisms could continue their good work. After refilling the pond I switched on the pump to add oxygen – the weather was mild but I won’t risk leaving it on overnight. It will take a couple of weeks, at least, for the pond to settle and regain any natural balance but I could add some new oxygenating plants to help the process – not all are hardy though, I’ll see what I can find.

The photographs, shown above, was taken in my garden on February 19th 2007.