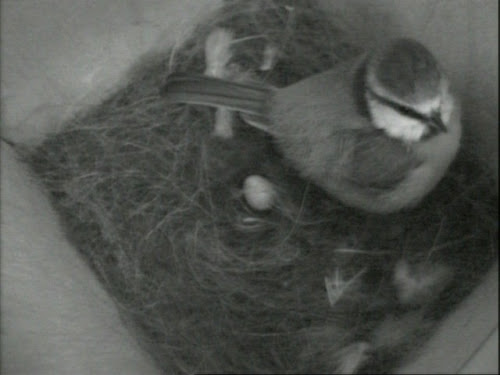 Our Camera Nestbox now has two eggs – the first one is hidden in the cup. Our Nestbox female clearly looked like she was waiting to show him egg number two at 5.40am this morning. He had been at the feeders but never came to feed her. She eventually left without covering the egg – the second picture taken at 8.00am shows it even more visible. 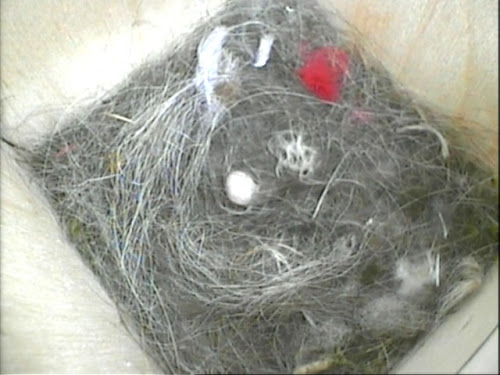 What happened first? As I switched the PC I looked out my window and spotted the male Blue Tit dive down into my garden to the feeders. He then swiftly flew up to my neighbour’s, heavily blossomed, Cherry tree. I had difficulty seeing him there. I suspected he might be waiting on the female – or perhaps planning to bring her breakfast in bed!

Was she still there? That was the question. Other mornings when I got up early to see her, just after 5am, she was already gone by the time I could see in the Nestbox. However yesterday she was there at 7.30am. This morning I had no idea what to expect. I was delighted to see her sitting pretty in the cup of the nest.

What were the first signs that an egg would be laid? Well, I have to say this is all new to me. I have looked at other websites so from reports there I did expect the eggs would be laid early in the morning. I didn’t want to know much more than that as I felt it would perhaps spoil the experience. I felt the nest was ready when she spent most of the day away from it. Was she enjoying her freedom, and rest, before laying and incubating her eggs? I was feeling quietly confident.

What did she do first? This was quite amusing to watch. She went round in circles, clockwise mostly, within the nest cup tugging at the material bringing it forwards toward her. Round and round she went occasionally changing direction. She also tried to shuffle in the cup but the nest really looked quite springy and she bounced about. This started at 5.15am.

Did the male visit her? No – instead he visited the feeders enjoying the sunflower hearts at 5.30am. I don’t believe he went near any plants for insects either as he did when she was building the nest.

What did she do next? Well, she snuggled herself low into the nest cup. Her head almost appeared stretched out and almost half her body was hidden. It was 5.32am and her breathing appeared fast. In the background I could hear the noises of birds chattering and singing outside. I assume she was keeping focused as she didn’t lift her head up at all as she would have any other time.

How much longer? Just over five minutes – in this time she moves forward in the nest cup. She begins to lift her tail end up then pushes it down into the cup. Then this movement changes with her pulling up her tail end out of the nest cup in longer movements and the hole of the cup becomes visible. Then one last lift and the egg was visible as you will see in the video below.

Did she look at the egg? Not right away. She sat where she was for a while – I assume tired with the effort of pushing the egg out. Her breathing was still a bit fast and heavy. Then suddenly she came to life again and went back into the cup burying away with it once again. I couldn’t see the egg now. She then appeared to re-adjust her tail end with her beak a few times and generally get herself in order once more.

Did the male visit her now? No – not even with a reward of food. She looked like she was expecting him too. She stood to the side of the egg as if to proudly show it to him for a while. She then clearly gave up hope of him visiting and re-adjusted the wall sides of the nest and left at around 6.04am – without covering the egg!

Did she return to the nest during the day? A few times. She moved material about and shuffled in the cup over the egg. She definitely didn’t make any attempt to hide this egg – was she trying to make a point? I didn’t see her much at all for the rest of the day.

Where is she now? Back in the Nestbox all tucked in. She had difficulty getting comfortable again tonight. The last glimpses inside the Nestbox tonight showed her breathing fast again. I wonder how many eggs she has left to lay.

Will I get up early again tomorrow? I’d like too – but I’ll not set an alarm.

2 thoughts on “Where are you?”