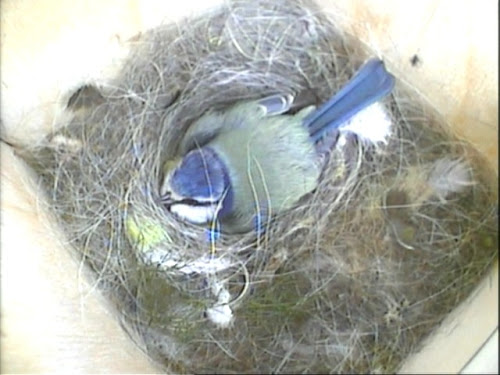 This morning, at 5.12am, I looked in on our nesting Blue Tit in our Camera Nestbox. She was sleeping in the cup of the nest and breathing quite fast. Was I too late to see an egg being laid again? Was she finished laying? A few minutes later I spotted the male outside taking a peanut from the feeder and flying off with it. This was a pattern I had seen on a few mornings – but today this was about to change. 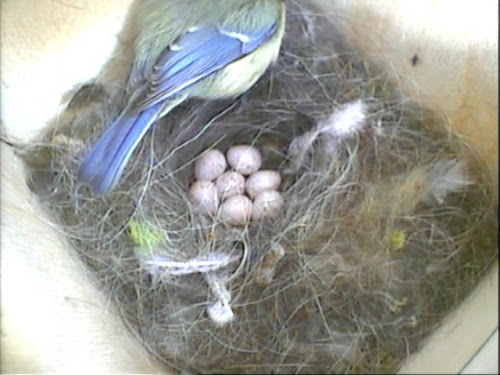 I cannot confirm that an egg was laid this morning and I have no idea if the first egg, that was buried deeper in the nest, has been brought to the surface.

I can confirm, though, that our female Blue Tit has begun to incubate seven eggs as you can see above. She has sat in the cup of the nest since I looked in this morning with only the occasional breaks to either walk around the Nestbox, to stretch her legs, to flap her wings a little or to go outside for a drink at my pond below. I have heard her having spells of chirping too which catch my attention when I am on the PC – it is nice to hear her.

I haven’t seen her eat and the male hasn’t come into feed her – he does appear to know things have changed though and has remained around the feeders more. He has also been on look-out nearby when she is out of the Nestbox – I assume he is looking after her and will warn her of danger. I expect he will feed her at some point – I hope I catch his visit.

I have considered buying live mealworms and placing them in a feeder where the male would find them now – to feed any successful chicks we may have hatch in the next two weeks. I will need to cover the container of the mealworms though as I cannot stand seeing them wriggle about.

Are any more eggs likely? I do not know the answer to that question – perhaps she may lay one more tomorrow. I am happy that she has not laid too many as perhaps they have more chance of survival.

The reality is that not all chicks survive. I was reading through the diaries of the links I have on the right column, under the heading ‘Bird Nestboxes – Cameras & Info’, and was sorry to read that all the Blue Tit chicks out of two Nestboxes on one site had died. However the six Great Tit chicks in the other Nestbox are thriving. If you wish to read about this click here.

Another link I would recommend for info on Blue Tits and Nesting is NestWatch – I look in on this one myself. I read there that when our nesting female dives into the nest cup re-adjusting her eggs, as I thought, she is actually turning them! I never thought of that. Both sites have Camera Nestboxes and diaries for a few years so clearly have lots of experience in what is likely to happen next.

2 thoughts on “Incubation begins with 7 eggs”