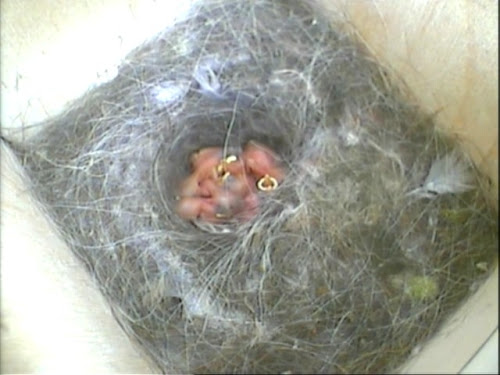 I have been a tad nervous about writing this post. At the moment we have eight Blue Tit chicks in our Camera Nestbox. They are tiny hungry little things and I am very aware that their chances of survival is reliant completely on the food in the beaks of their parents!

How old are they? Well I am not absolutely sure on the first four chicks. I spotted them on Monday morning which suggests they could have hatched then or on the Sunday – so we could guess that four chicks are now four or three days old. I watched one hatch on Monday – so number five is now three days old. Chicks numbers six and seven hatched on Tuesday so that makes them two days old. The final chick hatched yesterday so it is the youngest at one day old – it is easily spotted in the nest as its mouth is much smaller than the others. I never saw the last chick hatch but noticed it yesterday in the nest by the pinker colour of its body and its smaller size. In the picture above the youngest chick is on the right with its mouth open. 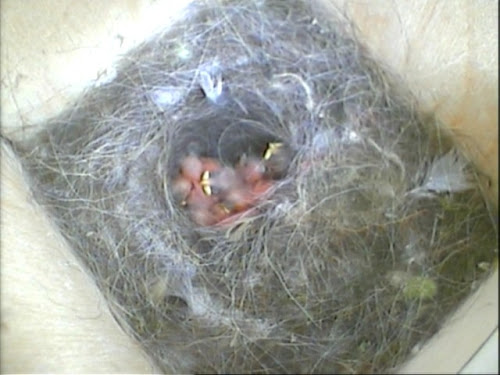 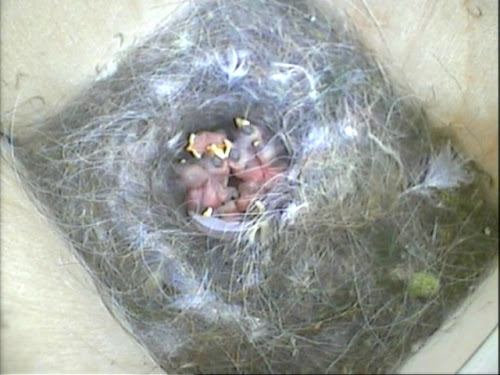 How do they look? Well they are similar to a new born baby with floppy heads and limbs that wriggle about with no particular coordination. Similar again to a newborn they respond to the parent’s voice but in this case it is a tweet which is a different sound than I have heard the parents use to call on each other. They have yellow banana-like mouths, as you can see above, tufty grey hair on their heads and a black band across their eyes. Their eyes are not open yet but their beaks are beginning to form. I would guess that the next stage will be a stronger neck so they can hold their head up. 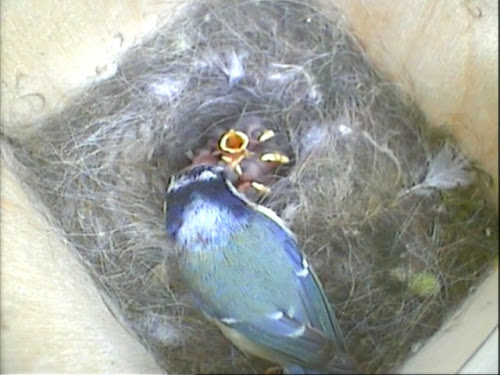 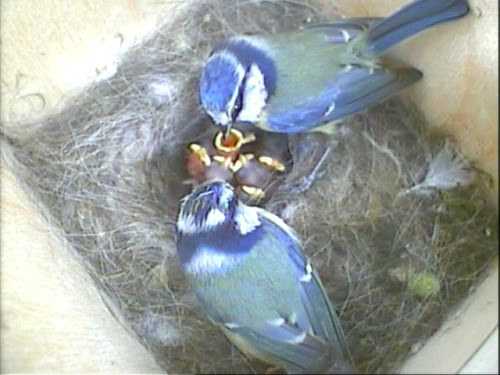 Calling to the chicks is mostly done by the female when she has food. She looks over the nest, calls to them and they struggle to pull their heads up and open their mouths – some are too late as she quickly feeds and disappears again for more food. The male is usually quite silent when he feeds them and sometime stays looking over the nest for a while as you can see above – the second picture shows that the female came in and her look reminds him to get moving and he leaves! However, I have noticed that when he feeds he tries to feed all the chicks a piece of what delicacy he has brought in as you will see in the video below. The female on the other hand will sometimes feed only one or two chicks – is she feeding up weaker ones or already aware that some are more likely to survive than others and concentrates on them?

The female still sits on the nest cup to keep her chicks warm and regularly dives in to clean up the ‘mess’ that the chicks are making now that they are eating. She mostly eats this mess but the male will also take his turn in cleaning up – but he takes it out of the nest and has not been seen eating it. Sometimes when she tidies up the chicks get pushed up and almost out of the nest as you can see in the picture below. 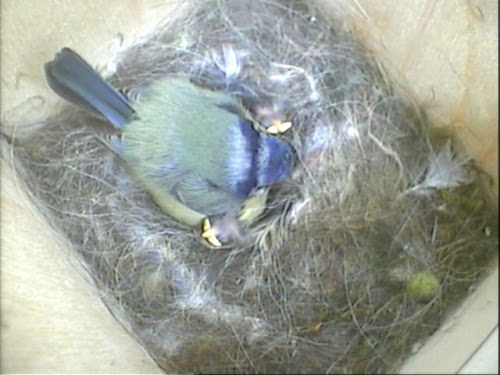 The menu for the chicks that I have seen so far has been a mix of caterpillars, spiders, small slugs and pieces of fat cake. I really don’t know if the fat cake is a good food but quite a lot went in last night – maybe the parents were trying to ensure their chicks survived the night. I am seeing less caterpillars going in and have heard about failures of other chicks due to lack of caterpillars in gardens due to weather conditions. Reluctantly I bought mealworms yesterday and placed them in three different containers hidden where I see the Blue Tits sometimes look. I don’t know if the parents will find them but for myself I know I have at least tried to help them. If any chicks do die they will be removed from the nest by the parents – hence my nervousness of the title of this post.

I contacted the RSPB yesterday to ask for any advice about the possible food shortages for the Blue Tits this year and about providing mealworms. Ian Peters, Wildlife Advisor, Bedfordshire replied:

“Unfortunately, the recent weather combination of cool and wet conditions is the worst possible situation for blue tits during the fledgling development stage. The caterpillars are there but they can be difficult to find and because the food demands for the growing brood are so high, they can quickly die even though they are still getting a little food. Longer periods of bad weather can mean almost 100% failure of nests across the country in some years, especially as blue tits have such a distinct breeding season. Fortunately, the temperature has now risen and some places in the country are experiencing drier conditions, which are perfect for caterpillars.”

He added:
“Mealworms are a potential solution for bad times but blue tits are so conditioned to looking for caterpillars that many individuals fail to recognise the food.”