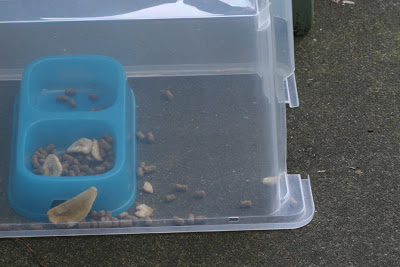 It has been almost a week now since a hedgehog was spotted and filmed in my garden. It has visited every night since then. Last night I had my video camera out again but didn’t catch it on film. I’ve logged our visits purely out of interest – I have no experience whatsoever of hedgehog visitors. I approached this new visitor like I would do any new species of bird in the garden.

More information – I have a number of links on the right column of this diary/blog and I knew I had one for the British Hedgehog Preservation Society so that is where I looked. I browsed the site and found a list in ‘From our leaflets’ then selected ‘Autumn Juveniles’ . I have a number of juvenile birds I have been watching in my garden but I had no idea at all that from September to the end of November juvenile hedgehogs may visit too. If you are interested in reading further about hedgehogs I would recommend a visit to this site as there is lots of useful information including instructions on how to make a Hedgehog House . In autumn hedgehogs begin to collect material as birds would do for their nests but they need are building a home to hibernate in over the winter months. Nature really is quite amazing isn’t it?

What do they eat? This is always the next thing I look up when a new bird species visits my garden. Well, hedgehogs like slugs and snails so it really is the gardener’s friend – especially if you grow hostas, as I do, as the slugs and snails love them! Pet shops and some garden centres will stock dried mixes of hedgehog food and it is widely known that they also have a liking for cat food but the Society also suggests that they also like dog food too – it is the meat bases that they must really like. I decided to buy dried hedgehog food for them.

Night visit number two was raining very hard and there were puddles on the ground. Dried food would be no good at all. I had read on the BHPS website that hedgehogs may take sultanas – so I scattered a few on the ground. I was confident that they would not go to waste as the blackbirds and the song thrushes love sultanas in my garden! We watched from a window and sure enough the hedgehog came and very quickly cleared through the lot – then ran off into the garden.

Night visit number three is when I began my feeding experiment. I had read about feeding stations in the BHPS website – again this was completely new to me! But just as we put up our Camera Nestbox and waited patiently to see if it would be used I thought it might be fun to try this too. I bought a rectangular plastic box which was almost transparent and cut a hole at one of the shorter sides for an entrance – 13cm x 13cm as the BHPS suggested. Turned upside down the box was to be used as a tunnel so that a cat was unable to get to the food inside. I bought a cat feeding dish from a pet shop (sorry, I have to smile at that) and put water in one side and the dried food in the other. I placed the dish at the opposite end from the entrance. I then scattered a few sultanas outside and just inside the entrance with some dried food too to tempt the hedgehog in. If it did come in this would mean that on wet nights I would still be able to give it food. Again it visited and took the sultanas – but only the sultanas and didn’t enter the feeding box.

Night visit number four was when I reduced the number of sultanas outside the feeding box and added some in the mix with the dried food. I also scattered a few sultanas and some dried food in front of the dish. We never saw the hedgehog visit that night but in the morning all sultanas on the ground were gone. Inside the feeding box the dried food on the ground was crushed – it definitely looked like the hedgehog had been in the box. It also looked like it was only searching for the sultanas as the dried food in the dish had been disturbed and some food was out of the dish and also the bottom of the dish could now be seen. This was getting interesting!

Night visit number five and my daughter filled up the dishes, with dried food only on one side and fresh water in the other. She put sultanas outside the entrance only and once again they were taken. It wasn’t clear if the hedgehog had entered the box this time.

Night visit number six, last night, I cleared out the dish and dried out the side that had water in it previously. This time I filled the water side with sultanas only and the other as usual with the dried mix. I placed the dish half way in the tunnel and only put out five sultanas on the ground in a trail to the side of the dish with sultanas in it. Only one sultana was placed on the ground outside the box. I set up my camera once again and waited to see what would happen next. The picture below is a grabbed frame from my video camera last night showing the feeding station as I set it up for the hedgehog. 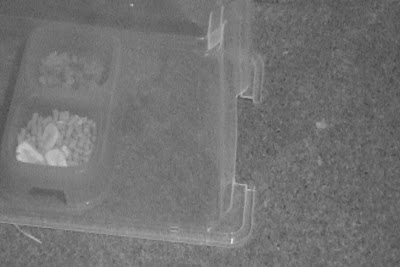 Disappointingly, I did not catch the hedgehog on film –but it did visit again. This morning I was very interested to see what had happened in my feeding box. The picture below shows no sultanas on the ground and all sultanas gone from the dish. It also looks like the hedgehog has searched through the dried food too!

Tonight, I think I will place the dish in the same place inside the box. I might try putting some sultanas in both sides and add a very small number of dried bits of food on one side. At the moment it looks like we will have a dry evening so I will set up my video camera once again. I would love to catch on film a hedgehog entering the feeding station I made especially for it. Oh yes, and I would also like it to bring a friend!