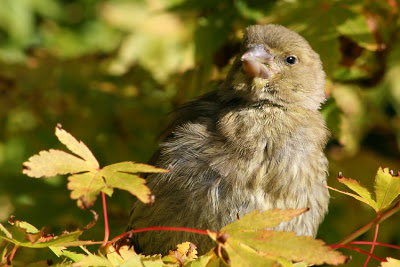 We have been extremely lucky to have had a warm and sunny week – what a welcome change this has been. It is almost like we are having our summer now! Since watching the birds in my garden I have noticed that they enjoy the sunshine too – many finches choosing to sit on branches appearing to sunbathe. 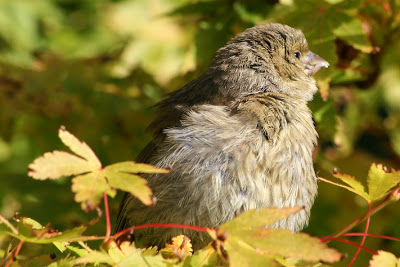 The greenfinch juvenile, shown in the photos above, allowed me to get really quite close to photograph him earlier this week. I took a number of photos but I particularly like these ones as the showed how beautiful the layers of feathers on a bird actually are. Just before I took these photos I watched it pick insects off the leaves of my Acer tree.

I was concerned though later as I watched it drink water from pond. I was able to see its shape more clearly and wondered if it was possibly suffering from the finch disease trichomoniasis . I have noticed that birds suffering from this disease do seem to be seen drinking a lot too.

Sadly, I have also noticed that greenfinches seem to be the top of the list, in my garden, of birds caught by cats. I am not certain but I do believe it was one of the two greenfinch juveniles a saw leave my garden in the mouth of my neighbours cat the next day. Another I found on the ground and I also found a chaffinch dead on my bird table – I expect it died from fright. I believe my CATWatch unit had been faulty and it has now been replaced – clearly it has been helping to protect the birds. However, I have since wondered that if the birds that I saw the cat go away with did have the disease trichomoniasis – could it harm it? I wonder if any research has been done on that.