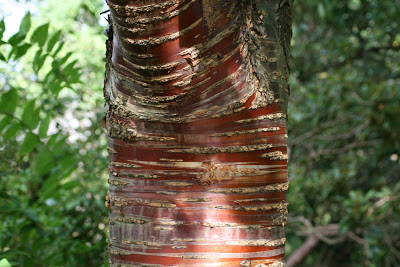 I have deliberately let my last two posts run a bit longer – so now I have a bit of catching up to do! I will get back to some garden basics later but first I want to share a post that I came across when I was mailing garden bloggers about the ornamental grasses posting. The photos showing the beauty of tree bark caught my attention and I made a mental note to come back to comment on it. I love trees too and as a teenager spent many hours in open fields drawing large, very ordinary, trees.

Abenteuer Garten is in Switzerland and Barbara’s recent post Bark tells of her love of trees and shows, you’ve guessed it, the bark of her trees. Why do I mention this? Well, recently I visited Branklyn Garden and guess what I photographed – yep tree bark! Let’s have another coincidence then. Barbara visited Scotland in May and enjoyed her visit at this very same garden and guess what she took back to Switzerland – very topically some black grass (Ophiopogon planiscapus ‘Nigrescens’). She found my blog through this grass and the meconopsis flower. It is great how the internet can connect like minded people isn’t it?

Prunus Serrula, shown in the first three photos, I am sure you will agree has really stunning bark! You can see its ribbons hanging from the branches and when these are pulled it reveals fantastic new bark. This does not harm the tree at all – it just makes it look even better. These and the following two photos were taken in Branklyn Garden. 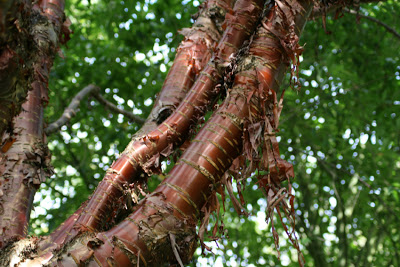 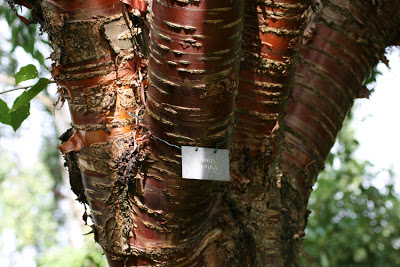 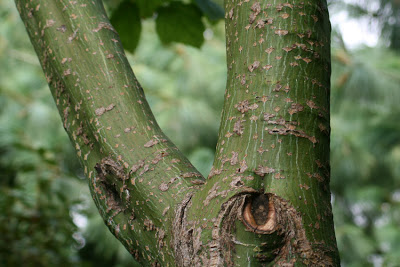 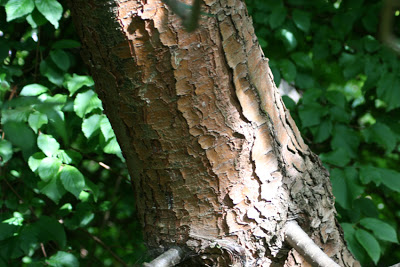 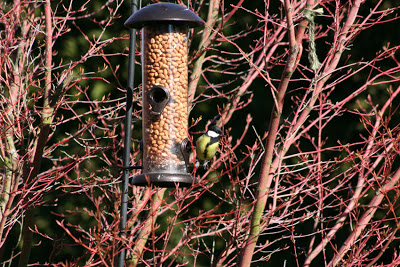 Acer palmatum Sango Kaku, shown in the last photo, is from my garden in April and shows what lovely colour this tree bark brings to my small garden. It looks particularly beautiful with early morning and late evening sun on it. It also looks great with my visiting garden birds bouncing their way through its branches to get to the feeder. The bird shown in this photo is a great tit. For any new visitors you will find lots on my visiting garden birds with photos, video and my camera Nestbox – see my labels on the right column.

The first five photos above were taken at Branklyn Garden on August 25th, 2007. The last photo was taken in my garden on April 5th, 2007.