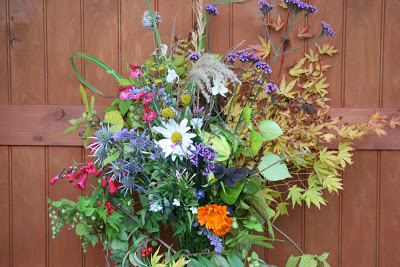 I have a compost bin but I have to confess to not being too successful in making good compost. However I can also generate a lot more material than my compost bin can take especially at this time of year. Fortunately our local council in my area of Scotland operate a green waste collection service and provide us with a wheelie bin to put our green waste in. Collections are every four weeks at this time of year and I did notice many households with bins out yesterday. Mine was full and I was looking forward to getting it emptied to use it once more.

Pruning back my Jasmine that grows through the trellis and up over my corner walkway was the first job I intended doing after my bin was emptied. It was getting difficult walking through this structure with its branches spilling out. So yesterday afternoon armed once again with my secateurs out I went in to my garden. As I have said many times before – I just love pruning! As this plant was flowering on the new growth I was quite ruthless with my pruning. I cut many stems back to within two or three pairs of leaves – others I took out entirely as this jasmine shares this space with clematis and golden hop.

Yesterday was another lovely day. It is definitely getting cooler now but we had blue skies and it was very pleasant to be outside working in the garden. As I walked back and forth to my bin with my pruned branches I noticed the wind pick up just a little. I then began to get distracted by plants gently blowing in the wind. After I completed my pruning I went in for a vase and stared collecting stems of the plants that were gently blowing in the wind.

The vase filled up much more than I expected as looking around my garden now many plants are coming to the end of their season. We had light morning frosts about two weeks ago but none since then. I placed the vase on the seat of my arbour (which we treated last weekend) as it was a lovely autumn colour. I began my vase collection with the last scented white flowers of my Jasmine.

Other climbing plants like my Sulphur Heart Ivy, Wisteria (whippy stems) and the small unnamed dark green leafed ivy were next to get a tidy up with the secateurs and I added the ivies to my vase.

Flowering plants always last that bit longer if the flowering stems that have finished are cut back to allow the plant to put all its energy to new flowers. I had a number of stems like this with my Penstemon so my secateurs went searching. I found that previous winds had blown a few stems with flowers to the ground so I added them to my vase. A white Campanula, unusual for this time of year, had one stem with flowers – it too had fallen to the ground so that was also added to my vase. The beautiful orange Calendulas were starting to droop a little so I took two good flowers for my vase to give the last buds a chance to open. The Japanese Anemones and Verbena Bonariensis have still plenty of flowers but I expect the Anemone will last the longest – my vase wouldn’t be complete without them as they always blow in the wind. I also found one remaining Shasta Daisy flower so it and a few of the flowers that were passed I also added to my vase.

The sea holly in my front garden has looked the best I have seen it in years. I intended pulling the lot out last year as it just wasn’t flowering – I guessed as it was an old plant it was just passed its best. However one small piece was left growing at the edge of one of my grasses so I decided just to leave it and it has been quite a show stopper this year. It is also extremely prickly as I found when I pruned and picked up a stem lying on the ground! The Sea Holly is in an open situation so it too blows in the slightest of winds. My cut stem was very carefully added to my vase!

Pruning for a second flush I posted on back in August and after being pruned then my Nepata Walker’s Low is looking great in flower once more. My Cirsium too is flowering once again too but as it has much more growth to put on yet and as it wasn’t actually blowing in the wind I left it alone. However the Nepata was added to my vase.

Ornamental grasses are always great for movement in the garden so as you would guess a selection was added to the vase. My bamboos were also gently moving yesterday and what did catch my eye was the Golden Hop that I am allowing to grow up my dead bamboo which had many bunches of hops blowing on its branches.

Tree branches were also gently moving yesterday but the movement of the Acers were really catching my eye with their autumn coloured leaves. My Pendulus Cotoneaster tree also caught my attention yesterday with its branches still laden with berries. I was able to add a pruned stem of these to my vase.

Dark brown, dry crumpled leaves from my Rowan Tree are now scattered on the ground around my arbour, on plants, gravel paths and on the lawn at that area of my garden. They too were blowing gently around in the wind yesterday but I don’t particularly enjoy seeing them. In borders and at my back door I also have Acer leaves in orange, yellow and red colours on the ground – I don’t mind seeing them for a little while at least. I will be picking them up and if I get them when they are still dry I will relocated them in my Gunnera border so any wildlife can use them from there. I could also try putting wet and dry ones in bags to make leaf mould by adding drainage hole and some water to the bag, tying it up and hiding it away behind my shed until spring.

Finally, I must add here that now is a time to consider covering small ponds with netting to catch the falling autumn leaves that are blowing about. All we need at the moment is a very cold night and strong winds and the leaves will be everywhere – including in the ponds. Decomposing leaves at the bottom of ponds can give off gases which in turn can make the surface of a pond look oily. You can see a photo of this here . So I plan to go fishin’ once again in my pond over the weekend to remove a few more pieces of duck weed and any leaves that may already be sitting in the bottom of my pond. I will then consider what I will use to prevent the leaves getting in my pond but at the same time allowing the birds and wildlife access!

The photo above was taken in my garden on October 11th 2007.

6 thoughts on “Blowing in the wind”