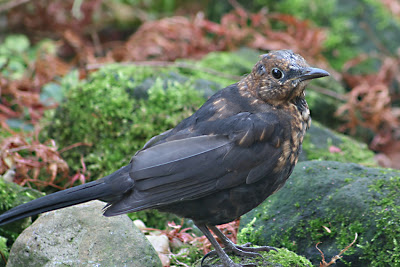 Last night BBC’s ‘One Show’ featured hedgehogs once again. I was busy at the time so asked my daughter to quickly record the programme. Today at lunchtime we watched this film and although we didn’t see the whole programme I was fascinated to see the very young hedgehog that the presenter was holding and even more so the albino one that wildlife presenter Steve Backshall was holding. I found myself researching this a bit more.

Searching through Google, or any other search engine, can be a bit hit or miss. It always requires a bit of filtering as we all know. However, I did find a few very interesting links that I would like to share. I found photos of two young albino hedgehogs and an adult male albino hedgehog .

However, the most interesting link I found was this one at the Daily Mail which shows photos of other albino animals. Although, I have to say that for some reason looking at these photos made me feel a little uncomfortable. I actually got the shivers looking at the white squirrel and peacock!

At the same time as I was browsing these sites I happened to look out my window and saw a juvenile blackbird. That isn’t exactly unusual, for this time of year, but I have been trying for the last two weeks to get photos of them to show the changing of their feathers from brown to black.

Today however, I managed to get a photo through my window, which you can see above, when I actually had my camera set up to catch the two Wrens I had seen visit earlier! When I uploaded my photos I found the wait was more than worth it. I had more than a photo of a Juvenile. I actually had one of, what looks like to me, a Juvenile Partial Albino Blackbird!

If you look at the photo closely you can see the white feathers growing in at the top of the head. How weird was that to be searching about albino wildlife at the same time when it is right outside my window!

However, I have found it very difficult to get photos but coincidentally earlier this week I set up my camera inside my back door to get a photo of the Juvenile Blackbirds – guess what I actually got? Yes, a photo of Partial Albino male Blackbird. This is always how it works in my garden when I set up my camera or video camera on my tripod – I get the unexpected! Through the glass the photo, shown below, isn’t as clear as it could be but it still shows how the white feathers are growing on the head of this bird. 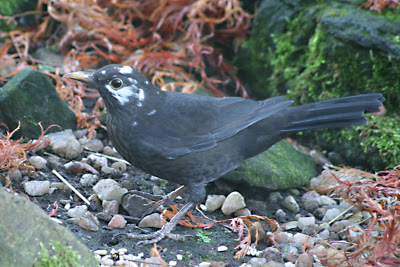 Why do white feathers grow on the heads of blackbirds and other birds? Well, this RSPB page shows complete albinism in a Blackbird – again I feel uncomfortable looking at the photo. However, I also found on another of my Birding Links ‘British Garden Birds’ a detailed description of why the white feathers grow. In this site it reads:
“Albinism is usually a genetic condition that causes the absence of pigment, but may also be caused through malnutrition, parasites or injuries. A common belief was that too much white bread was the cause of albinism, but this is not the case. Albinism of varying degrees is quite common in”

I would definitely agree that Blackbirds can have this in varying degrees as I have definitely seen at least three different Partial Albino Blackbirds visit my garden – the patterns of white feathers are different in them all. They don’t get white bread in my garden either. I would really like to get some good photos of them but for today I am absolutely delighted with the photo of the Juvenile through my window!