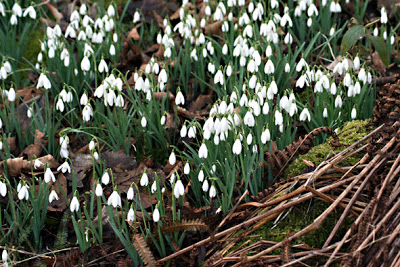 …not in my garden! Okay hands up, I have been useless at planting bulbs for years. This is probably due to a few factors the most likely cause being that I move my plants around a lot. The bulbs then end up deeper in the ground and never see the light of day again.

Ah, but I have got around this now with two ’Shirl-friendly’ ways of planting bulbs – but I’ll keep that for my next post. Snowdrops are one of the most common bulbs growing in a typical Scottish garden and I do plan to try growing them again for next year. For the moment though I will share some images from outside my garden.

The Scottish Snowdrop Festival began on February 1st and continues until March 16th and this is its second year. However, my visit today was to Dalmeny Park in South Queensferry (a 45 minute walk from under the Forth Rail Bridge) which has opened one Sunday in February for many years now. I have been before although that was a few years ago now.

The walk from South Queensferry seemed a good idea at the start. It was a nice day. However I had not walked this route before and hadn’t realised how long it would take – nor how steep the walk would be! Yep, I really think I should have been in training for this walk. So… some time later I found myself walking past the cars that were queuing to get parked. Walking was a good idea after all – I found an extra spring in my step as I walked past the cars! 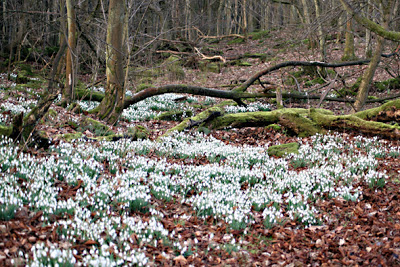 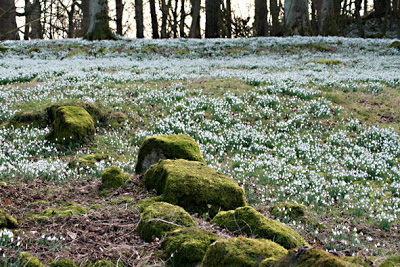 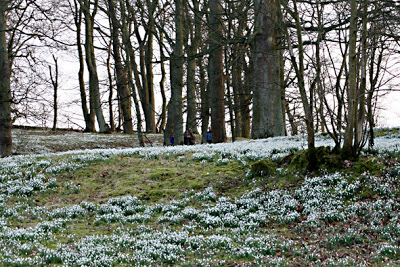 ‘Suitable for agile walkers’ the sign with the arrow read when I finally came to the woodland path that led to the snowdrops. Up the path I went, as did other visitors although a few people perhaps shouldn’t have. The positive side of this walk today was that the ground was a little damp but not wet. Good job as I chose not to wear my wellies!

Gosh, I had no idea the climb lasted so long. I stopped a few times to catch my breath under the pretence that I was admiring the view – yeh right! If I hadn’t already walked up a hill to get this far it would have been quite a different visit. Oh I hoped this walk was worth it. Finally I came over the brow of a hill and there they all were! Thousands of tiny white bells greeted me by gently nodding in answer to my question. Yes, yes it was worth it! Lots of other people stopped for a moment too joining me in reaching for cameras in their bags and pockets.

Down then up again, twisting and turning the winding paths went. Snowdrops were above my head height on one side and below my feet and out into the distance on the other. Mossy rocks and branches added colour to the darker setting of the woodland with rusty brown leaves on the ground. Oh, I love woodland walks. 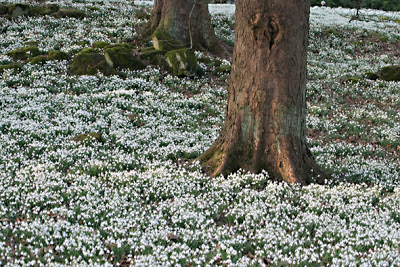 The lighting throughout my walk varied a great deal as the tree canopies above opened and closed. The woodland floor went from enclosed to open too creating a wonderful atmosphere which was also enhanced by the variety of people that were taking this walk too. The woodland was alive but not with wildlife but with the chatter of people out on a lovely Sunday afternoon. 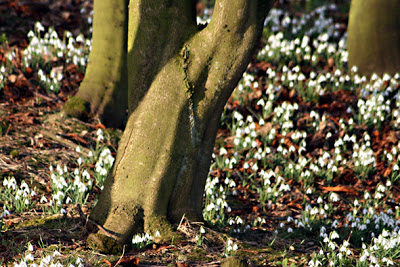 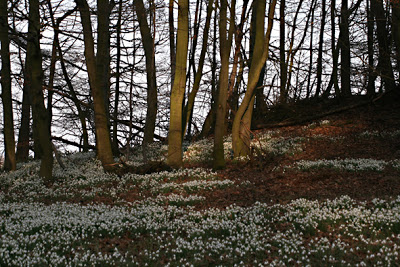 I took a different route back to South Queensferry choosing to walk along the road by the River Forth. I walked under the Forth Rail Bridge and straight to a restaurant for a coffee and well earned seat by a warm wood burning stove. Ah yes, I really should plant wonderful drifts of snowdrops in my garden for next year – I really should!

All photos above were taken at Dalmeny Park on February 17th 2008.

25 thoughts on “Snowdrops, snowdrops everywhere but…”