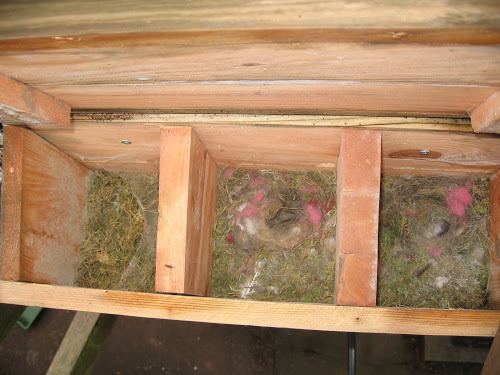 Today saw some very interesting activity at the nestboxes. If you have been following the story of our Nestbox that has a camera you will know that we have a blue tit roosting at night but another pair visiting during the day. Tonight saw some commotion in the Nestbox as our rooster had an uninvited visitor!

The rooster successfully chased the intruder out the Nestbox, through the garden and through a neighbour’s tree. I wonder if this was the female of the daytime pair. However this really did unsettle the rooster. It returned to the Nestbox entrance a number of times before finally coming in. A quick look around the box and a watchful eye on the entrance hole for a little while and then she quickly tucked herself in for the night almost like she was having a bad dream. I watched a while to see if the intruder returned but there was no sign.

Our Camera Nestbox was not the first Nestbox we have had in our garden. The year before we had a terrace box which we are guessing (without a camera) had a successful brood. Unfortunately the terrace box had three entrance holes and the silly, exhausted, blue tit tried to build nests in all three boxes which you can see above. I watched it as it gathered moss from our lawn and took it into all three units. Now this Nestbox got quite damp so we replaced it for the next year – when wasps moved in! We cleaned it up last autumn and added wood shavings just as we did in our camera Nestbox. Of course we cannot see what is going on inside this box so I have no idea if it has had roosters.

This morning I noticed something on the ground below our Terrace Nestbox. It looked like wood shavings. I looked up at the Nestbox to see more wood shavings falling out. Then I saw the head of a blue tit – now who was this? Could this be a new blue tit to my garden perhaps? Maybe the daytime female was checking out another Nestbox but she always visits with the male not far away and he does visit with her.

The Terrace Nestbox had one blue tit visiting two of the three units by itself this morning and boy was it busy!! I am guessing by the activity it was a female and looking at the video footage it does not have the markings of the Camera Nestbox rooster. So we now have a new kid on the block! I should have taken photos of the amount of wood shavings that this blue tit removed in a short time – it was fascinating to watch.

Which house was I cleaning, video 1:46 with background birdsong, try 480p quality.

I quickly ran out with my video camera and set it on my tripod. I have no idea how long the blue tit had been working but I caught 20 minutes on film as she went back and forward. I have not edited the short video above except for increasing the volume of the birds singing in the garden at the time. You can see how quickly she worked. Fog rolled in quickly over the garden tonight at the time a bird would go in to roost but I didn’t want to put my video camera out in the damp air.

Tomorrow morning I will sweep away the wood shavings to see if any more is removed during the morning. Mornings seem to be the time that this activity takes place. Oh and I wonder if the rooster will visit the camera Nestbox during the day to chase away the competition. This really is fascinating behaviour and I am thoroughly enjoying second guessing what will happen next!

The video above was taken on February 19th 2008

10 thoughts on “Toil and trouble”