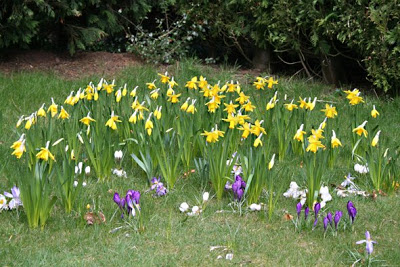 What flowers can be seen in my garden in the middle of March? Well, as recent posts have shown it is bulbs that have been making the biggest impression with crocus and narcissi. However there is a lot more going on in the garden at the moment.

Perhaps you might like to browse through some other gardens by visiting Carol’s Bloom Day List where many other garden blogs have posted on what is on flower in their gardens on the 15th of the month. This is all organised by Carol at May Dreams Gardens and what a great idea it is. I do like this new list format Carol! 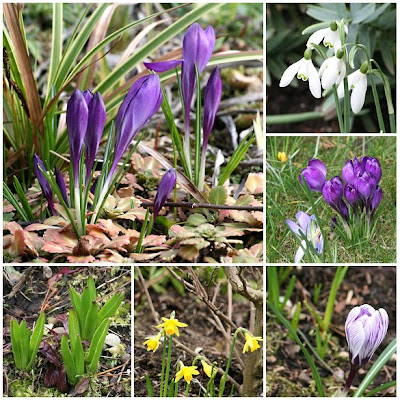 Bulbs grown under grass have worked well for me as when moving plants around I tend to disturb the bulbs and loose them. We are now in the second stage of flower in this grass area shown above. Crocuses have been joined by the first flowering of the three species of narcissi growing here. There are also fritillaries in this planting too. 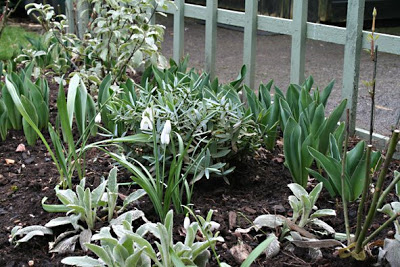 The tiny area that is my silver themed border is just bursting with signs of spring. You can see that I now have some snowdrops in the garden and I chose to plant them here as the leaf colour would blend in well with other silver foliage plants. I would aslo seen them from a window.

Just look at the growth in the tulips – I cannot wait to see them in flower especially as I don’t usually grow them. Although I see this as a silver border I do want to have some seasonal punches of colour with it. Next month’s photos will be quite different! The close-up photos below show the clematis ‘Miss Bateman’ and a rose ‘Silver Anniversary’ both growing in this border. 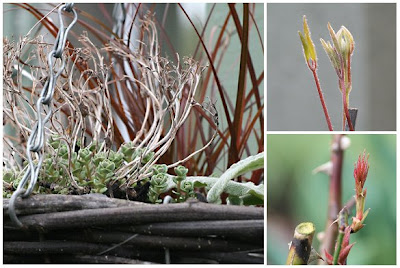 Above my silver border is a hanging basket that I gave a make-over last autumn. Over the winter months I have been able to enjoy seeing the deep red of the grass and the soft fluffy silver of the stachys. The sedum ‘Rose Carpet’ died back but on my walkabout on the 15th I was delighted to discover it is growing back once again. I will now get the previous years flowering branches trimmed out.

Alliums can now be seen growing through gravel where they have self seeded very freely!

Alliums can also be seen in square pots – these were my bargain bulbs from last year and as I wasn’t sure where I would put them I planted them in pots. I have buried some in their pots already but of course they should really be planted directly in the ground. I will see how they grow and look first. This is an experiment so we shall see how it works.

Alliums are also growing in ornament pots where other pants have self seeded with them – including dandelion. Mm… but I’ve plans for the dandelions this year! 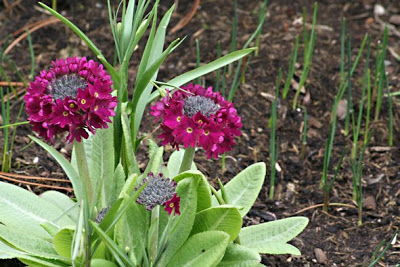 Primulas are also sarting to show great promise. The drumstick ones are continuing to grow as you can see above where the ball almost forming and one just starting form. You can also see more alliums in the background – drumstick ones!

Candelabra primulas are now starting to form a flower head and the beautiful native lemon primrose is also showing some flower buds. Ah… but what is the last primula in the selection above. Just testing – that is not a primula but I am thrilled to show the first leaves of the stunning blue meconopsis! 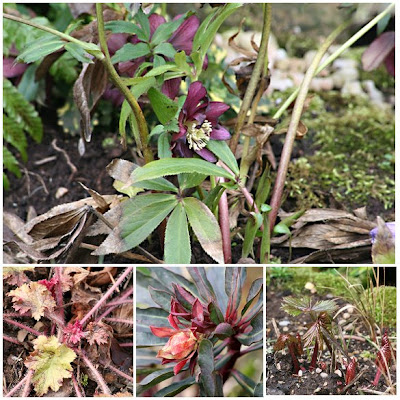 Rich reds are being seen in my garden at the moment from the hellebore, heuchera, euphorbia and new growth of a green leaved ligularia. For the moment I still have the red stems too from my coral bark Acer tree but by next month that too will be changing. 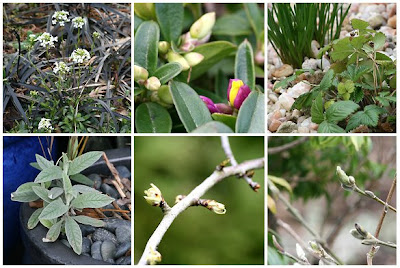 Some plants have toughed out the cold of the winter months and some have even continued to flower like the delicate white flowers of the arabis. The polygala carpet on my rockery has had lemon flowers for a large part of the winter. They look like they are resting for the moment but now the pink ones are now about to open. The last photo on the top row above shows the tiny alpine strawberry which stayed green throughout the winter. The chives behind it died down but as you can see they are growing back too.

What do you do with self sown plants growing in cracks and other places? Well, I did consider lifting this buddleia that is growing in the pot with the christophii aliums, potting it up and putting it in the safety of my greenhouse before winter. However, sometimes when I have done that the plant has died. I decided a higher risk strategy would be to leave outside where it was. This has paid off this time – look how well it looks in the first photo of the second row above. Ah… but it is the buds on the trees and shrubs that make me really think of spring! 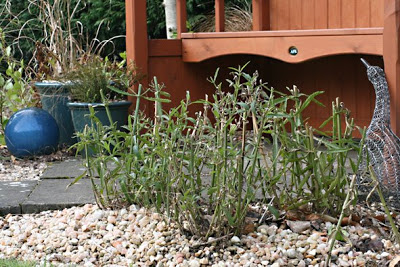 Finally, let’s jump all the way to summer and to the bees and butterflies on the delicate flowers of verbena bonariensis. Is this plant a perennial or not? Questions have been asked in other blogs. Well, many seem to treat it as an annual. It is very likely to be lost over the winter months so taking cuttings or lifting one and over wintering it in a greenhouse may be a good insurance against loss.

However, here in my Scottish garden the photo above shows my verbena bonariensis as I cut it down last autumn – looking pretty much as I left it! I decided the risk strategy here only as this area is slightly sheltered with the arbour and hedge. The plants were three good sized clumps too. I should also add that we have not had the coldest of winters this year. This plant really isn’t hardy in all areas but I cannot believe it hasn’t died back at all. Mm… I still may take some cutting this year. Ah… the garden year beckons!!

All photos above were taken in my garden on March 15th 2008.