Long-tailed tits have never visited my garden until a few days ago and I was absolutely thrilled to see them! I thought I saw a glimpse on Thursday but put it down to wishful thinking on my part. It was the long thin tail on a bird flying out of my fatcake guardian that caught my eye. After seeing this bird in other garden blogs I hoped I would see it but in reality never thought I would.

After spotting this bird again on Friday I set up my video camera to try and catch it on film. It also helps to ID the bird too. Now, here I really got a surprise as there were two Long-tailed tits visiting!

I edited my film but it was a windy day and the predominant colour for the movement in my film was green so I was not at all hopeful that my film would go through the upload process successfully. It didn’t – as you can see below. I have added music as there is a fair bit of wind and other background noises too. However if you listen carefully you will hear the distinctive call it makes especially before it arrives at the feeder and that is why I decided to show this film. I wonder if it is the birds calling to each other – perhaps they could be a pair! 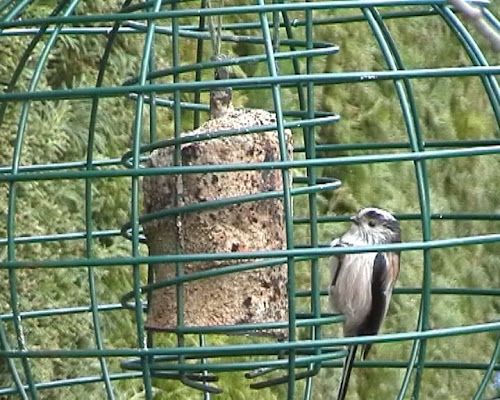 The photo above is taken as a ‘frame grab’ from the video. These birds are visiting for just a few minutes and then leaving again. So far I have spotted no pattern to their visits. I stood for ages outside waiting patiently waiting for them to return. No sooner was I indoors and they came! Well, that was on the cards wasn’t it? So I set my camera on a tripod at the window hoping to catch them from inside… Nope, as you can see above no such joy! However I did have a couple of opportunities with the female blackbird having a bath and a song thrush trying to find some sultanas – which the blackbirds ate earlier. I will continue to watch the Long-tailed tit from my window, assuming it will continue to visit. Today I will pick up a new fatcake as the one in the guardian isn’t very fresh. The guardian doesn’t completely stop the starlings getting in but on the whole where it is sited now it has worked fairly successfully.

Activity out of my window caught my eye as I was about to post this. I see trouble ahead! The tiny blue tits that are intending to use one of my nestboxes are not always as sweet as they look. I have just spotted them continuing to harass the long-tailed tits at the fat feeder – even the robin who was feeding innocently in there got chased too! The blue tits are especially feisty in the garden prior to nesting. Mm… I hope the long-tailed tits came back! They appeared to try and hold their ground against the blue tit with one going in as the blue tit chased the other back and forth. Mm..

Finally, I have to mention that the nest the long-tailed tit builds it really is quite amazing. When I looked up my book I was absolutely fascinated to see this ‘ball’ of a nest on a branch. I went searching to find a photo a discovered one by Emilio Dicerbo which I found on the website of Moffat and District Wildlife Club which is south of me here in Scotland.

I would like to thank Emilio for his permission to use is photo and the Wildlife Club for their help with my request. What I particularly found fascinating about this nest was that it wasn’t high up in a tree but instead in a very prickly shrub! Now the blue tits clearly don’t have any competition with the nestboxes so they are more importantly thinking of the food resources for any future chicks and keeping as much to themselves as they can. Isn’t nature amazing? The video above was taken in my garden on March 14th 2008. The photos of the blackbird and song thrush were through a window on March 15th 2008.