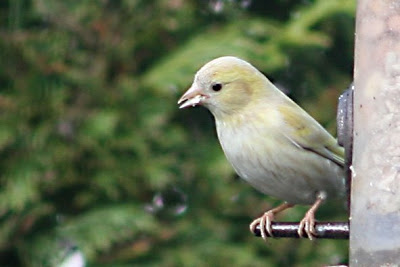 Over the weekend I’ve had a bit of a challenge trying to ID a visiting bird to my garden. Wow… the pale yellow colouring of this bird was really noticed in the flock of birds descending on the feeders on Saturday afternoon. It was raining quite hard at the time and raindrops were all over my back window but I still took some photos. I had never seen a bird like this one.

Quickly browsing through my book I checked for birds that I hadn’t seen like a yellowhammer (I am still new to bird ID’s) where of course I was well off the mark. I browsed and browsed. Nope, no ID. I was very curious now.

Perhaps this wasn’t a new garden bird – maybe it was an escaped caged bird. A canary… could it be a canary? I checked images on Google. I then felt quite silly that I had been browsing my RSPB Complete Book of Birds. So for a little while I considered it could be someone’s pet and made a (brief) request to my family that they might want to ask neighbours if they had an escaped bird, as I kept an eye on it. Nope… this suggestion wasn’t taken on – fortunately for me! 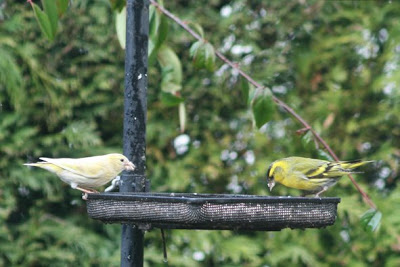 I watched the behaviour of this bird. It really didn’t look like it was new to this group of siskins it came to the feeders with. It ate at the small tray of sunflower hearts with them and a greenfinch and even the larger house sparrow. Mm… I started looking at my less than clear photos again.

I could see a very light brown cap as you will see on the photo below. I was starting to convince myself that I could see the markings of a siskin male. Could this be some sort of ‘almost’ albino male siskin? I was convincing myself now that it was. Nope… I was now thinking it cannot be a canary. Phew… that was lucky we didn’t ask neighbours!! 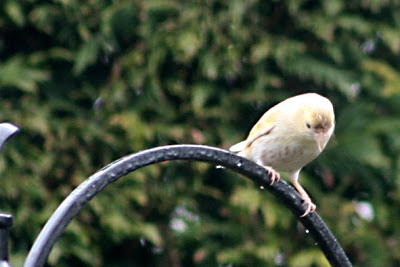 I then considered who might know from one of the contacts I have made through my blog. I sent off an email. However, it was late Saturday afternoon and this person may even be away for the weekend. Later on that evening I then considered a bird forum. I am a member of one already but I decided to join a worldwide one, the Birdforum, as I spotted an image from their gallery of a larger pale yellow bird. I couldn’t browse further until I became a member. It was getting late.

Next morning this pale yellow bird was back at the feeders again. So now it was time to find my way around this new forum, post a message and upload a few photos. Briefly browsing, the word ‘leucisitic’ came up with another pale yellow bird. If you are familiar with forums you may know that responses back vary based on other more popular topics there at the time. However it just needs a couple of answers to confirm an ID. 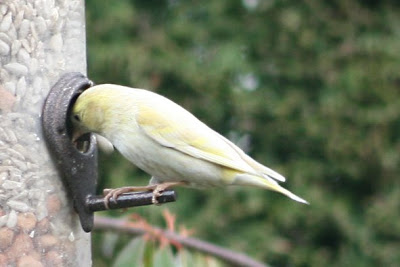 Sunday mornings are maybe a good time for forums as within minutes of posting my question asking for an ID I had an answer. I was well chuffed that I had finally worked out what this pale yellow bird was. However I didn’t know what leucistic was. I asked this member the question. I then had two replies – fantastic! I also had a reply to my email now too.

I now knew exactly what was visiting my garden. This bird is a leucistic siskin. It has no dark pigments at all so that is why I can see markings unlike albino where there are no pigments at all. My sincere thanks go to the members of the BirdForum and to Border who confirmed my final suspicions.

Finally, I do have a very great concern for the survival of this bird. We do have Sparrowhawks visiting the garden and this bird and as you would imagine is very easy to spot!

Oh yes, I should perhaps say that yesterday I also spotted some other ‘bird’ activity from my window seat…

14 thoughts on “Spot the birdie”