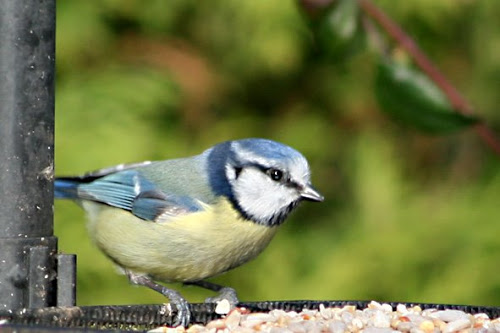 I am guessing that there are a few people interested in what is going on with the blue tit pair visiting the nestboxes in my garden. However, what I would really like to know is who finally makes the decision on which Nestbox to use – the male or the female? Yep… most would probably say the female – after all she is the one who will make the nest. However with the activity I watched over the weekend the male is definitely trying to have his say!

Okay, If you are a new visitor I should explain what is going on. I have two nestboxes that a pair of blue tits are interested in. One has a camera and the other does not – the Arch Nestbox. Yep… you’ve guessed correctly! This pair are tending to visit the Arch Nestbox more often. However, I am delighted to say that the female is now checking out the camera box too – much to the annoyance of the male…

The photo above shows our male blue tit enjoying supper on Sunday satisfied for at least a little while that he has had his say! Before looking at the video below I should highlight what I believe is going on. I am basing my observations on the activity I saw in this Nestbox last year prior to a nest being built.

Tap, tap, tap comes through the speakers at my PC telling me there is someone in. I joked last year that it was ‘the snagging inspector’ when the female appeared to be checking out the construction of the Nestbox.

First she checks out the walls. However when she starts tapping on the floor too you know she is taking the box seriously! Next, if you are lucky, she will perform the nesting shuffle. Okay, I was watching and wishing her to do this on Sunday and I wasn’t disappointed! She did a few nesting shuffles over a number of visits. The floor in the camera box is much smoother than that in the Arch Nestbox so I wonder if she will be happier with it.

However I did notice that she was almost agitated as she checked out the box. Then I heard the male call her. She looked out after him but then came back in the box again. She tapped and tapped – one corner seemed to get more attention than the others. She checked out the entrance too. She shuffled some more and eventually she had a tap at the camera too before finally leaving.

A little while later I heard the tap, tap through the speakers again. There was nobody inside the box but the lighting levels etc told me that there was a bird tapping outside the entrance. I looked out my window to see there was a blue tit at the Arch box too. Ah… that would solve the problem if we had two pairs!

Nope… the male was at the Arch box again. He clearly heard the female at the Camera box and buzzed over quickly to it. Next thing, the female returns to the Arch boxes and begins to tap at its entrance. The male follows her and hangs around on the Arch for a moment and then off he goes to the feeders. The female tapped at the entrance a little while (perhaps to show willing) before flying off to a neighbours tree. Now what is going on now? Have a look for yourself. I would suggest you turn your speakers up full to hear what is going on. Listen out for the male calling her and the plane that flies over the garden – she seems to hear that too.

Needless to say I am absolutely thrilled to be able to share this pre nesting activity from my camera box. I wonder though which way this very unpredictable nesting will go though. My money is still on the Arch box but…

Finally this is a day of three posts, so do pop back later as I’ve had more surprise visitors…

The photo and video above were taken in my garden on Sunday 30th March 2008.

11 thoughts on “Who makes the decisions?”