It’s April the first and am I having a joke here? Nope… what you are about to see is entirely true and you have my assurance that no animals were harmed during the making of this film!

Okay what is this about? Well…. a few months back we had a certain visitor to our garden. A very popular visitor this was too! It was seen in the ‘wee’ small hours of the night… It came to my garden in search of food and after devouring its natural food sources. It came in search of…..

Crushed peanuts and sultanas were found to be the favourite food. After trying many reputable ‘branded’ foods the snout of this animal did not even disturb the surface of the food in the rather splendid dishes I supplied.

This was a very noisy and messy feeder. It often left a few… presents too! How kind of it. It like to party and what a good time to return to my garden… 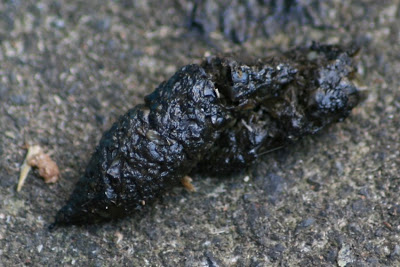 The hedgehog is back!

Okay on a more serious note, the dropping I discovered on Monday morning (not the one shown above which was found last year) was of a hedgehog. It was spotted in the area where I left food out for them last year. This would suggest to me that this could be a returning visitor and that some hedgehogs could be out of hibernation – for a visit or too. Let’s hope it was the juvenile I worried about last year. However I am not sure if this is good or not. Perhaps it is still too cold for them. I will make sure I continue to put food out as they will really need it if they are exploring now.

Before installing our outside camera we taped it securely to a plank of wood as it has a night setting too. We had the chance to have a peek inside the hedgehog box I built last year to see if it had been used at all. I had no way of knowing. I had always considered dismantling this set-up but after my very careful exploration, being directed by my willing helper through the intercom facility on a cordless phone, I have decided to leave it. I could be a nice home yet.

There was a pile of leaves inside my box hedgehog house so it is hard to tell if it has been used at all. Although I do remember some leaves being there when I added the extension/porch at the front. Therefore I would suspect there hasn’t been a hedgehog hibernating there. I was a little late perhaps in making it anyway. However, I did still try to help the hedgehogs.

Okay, so what do you do if see one of the delightful presents shown above on your borders, lawn or paving? Well, there are many sites that have very useful information so I will give you links to a few. I would suggest that you do look out for the droppings as that will tell you if they pass through your garden. This is a time of year when we are out in the garden and before the foliage covers the ground again it is a good time to look. I had seen this dropping once before and had originally thought a slightly smaller specimen belonged to a slightly larger bird!

Finally, is a visiting hedgehog a good thing for the garden? Oh yes.. it is a great natural control of slugs and snails!

The first video above was taken on Tuesday April 1st 2008. The second video was taken September 11th 2007.

11 thoughts on “The Director’s Cut”