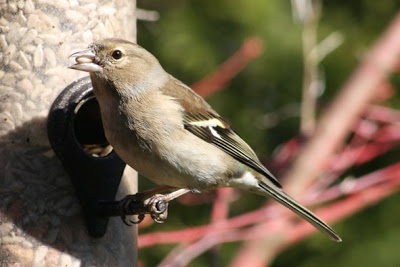 The daffodils in my garden are still giving a good show of colour but soon they will fade away. Other fancier varieties and the paper whites are now coming into flower and the fritillaries won’t be far behind. We had sleet and snow over the weekend so I didn’t get as much gardening done as I would have liked. 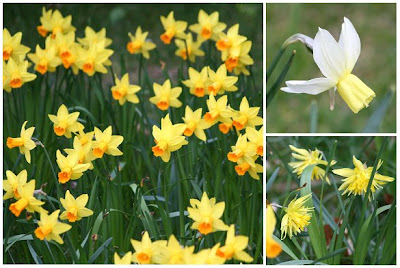 As I retreated into the house for shelter the birds appeared at speed to the feeders from their hidden positions of shelter. I have noticed that in cold and wet days the feeders are much busier. Between showers the sun came out again allowing brief photo opportunities.

This female chaffinch caught my eye. I haven’t noticed the female birds collecting material for building nests from my garden, so far, but I’m sure they must be doing it. They will need all the energy they can get from food now as they will be building nests and producing eggs soon. 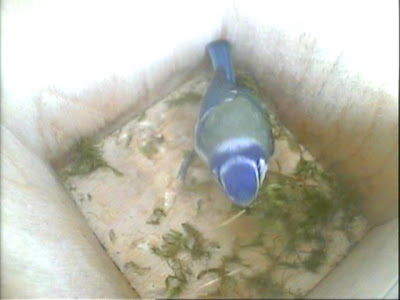 If you are wondering about the female blue tit that has been trying to decide which nestbox to use the photo above probably gives you a clue. Last night she had her first sleep-over in our Camera Nestbox so it now looks like this is the one she will use. I am trying not to be too happy about this in case she changes her mind! I will post some more photos and video over the weekend to let you see her progress. 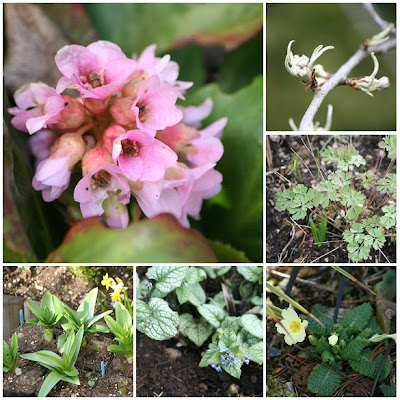 As the nest in our Nestbox moves on, slowly, the plants are picking up speed. I spotted a couple of bergenia flowers and the buds are increasing in size on the trees. I also noticed aquilegia foliage looking very fresh and pale yellow primrose flowers tucked in dark corners are beginning to emerge too. I love primroses.

I also love alliums and you can see the growth that allium globemaster has put on in the pots I have started them off in. I must decide soon where I will plant them!

The smaller photo in the middle above shows the tiny blue clusters of flowers on Brunnera ‘Jack Frost’. Now this plant is new to me having bought it last summer with beautiful large leaves. I am guessing it has a lot of growing to do yet. It was a lovely surprise to see tiptoeing between the tulips! 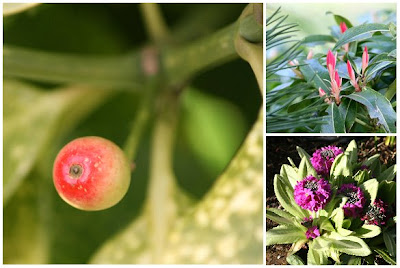 Walking around my garden with the camera at the weekend I was surprised to what looked like tiny apples tucked in my acuba shrub. I have never noticed them on previous years. They aren’t apples of course but berries however, there are only a few and they do look strange. I had been noticing the red bracts coming on the pieris bushes which I also love to see and then the blossom that will follow. But I have to end this selection of flowers with the drumstick primulas which are giving the deepest colour in the garden at the moment.

Sadly it looks like a few birds have now moved on from my garden. Recently I haven’t noticed visits from the blackcap, long-tailed tit or our most unusual visitor the leucistic siskin. They all added different characters to the mix of birds that visit. I will keep an eye out to see if I see them from my window. 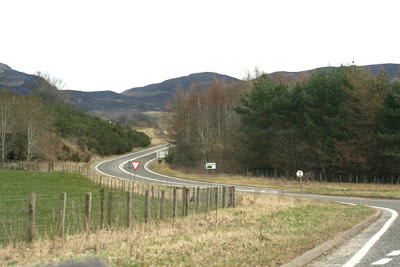 Finally, the photo above was taken through a window, by one of my daughters, whilst I was driving. The schools are off at the moment and I have been out and about with them – hence fewer posts and comments this last week or so.

We were heading home from a part of Perthshire that I grew up in. I was searching for red squirrels in an area where I saw them as a child. We did find them but I was just not close or quick enough to get any photos – except one that shows a tail disappearing. Ah well… at least we saw them and I will try to get photos again.

Oh yes… the hedgehogs! I do believe there are two visiting now and one is smaller. I am very much hoping the smaller one is the juvenile that I was worried about last autumn. I will try and get photos and video soon but they are tricky to see.

The photos above were all taken in my garden over the weekend April 5th-6th 2008 except from the last photo which was taken on April 3rd 2008 on the old A9 joining the new A9 heading South after Blair Atholl.