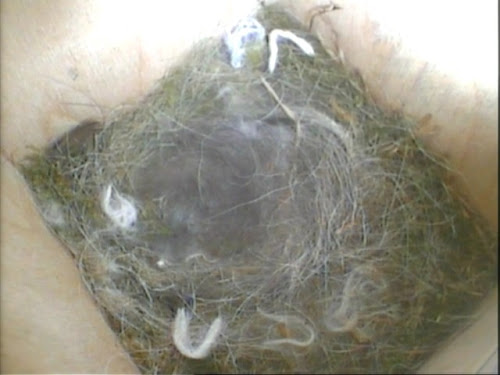 If you are a regular visitor you may have guessed by now that my estimate of an egg in our Camera Nestbox on Monday was well out. Our nesting blue tits have been ten days behind last year. However I really did feel that they would eventually catch up.

You will also be very aware of the hard work our nesting female has made of making her nest and it was hard to tell for sure that she would ever complete it. However, since Monday she has made excellent progress!

The photos in the montage above were taken left to right starting on May 2nd with the last taken on the 5th. The larger photo was taken on May 6th. All photos were taken between 7.30am and 9am. During the day the condition of the nest would change. The female is still roosting and you can now see that she has finally made the cup of her nest.

To line the nest cup she has brought in what looks like hair of some sort and short strands of wool. The odd small feather has come in too. It really is a work of art! Yesterday didn’t see too much difference to the nest but in the evening she was more unsettled as she roosted. So what about this morning…. 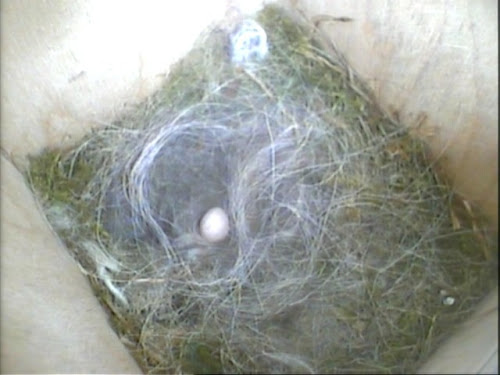 I am absolutely EGGSTATIC to announce that we have the first egg for 2008!! Sorry, I kept you waiting for this news… a break in internet connection during posting hasn’t helped! Anyway back to the nest…

This morning I was very lucky to see the egg as clearly as you can see in the photo above. Just 45 mins later when I looked in the Nestbox it was covered again and then again until the last photo below shows it just over two hours later. I did look again in the nestbox around lunchtime and the egg was completely hidden! 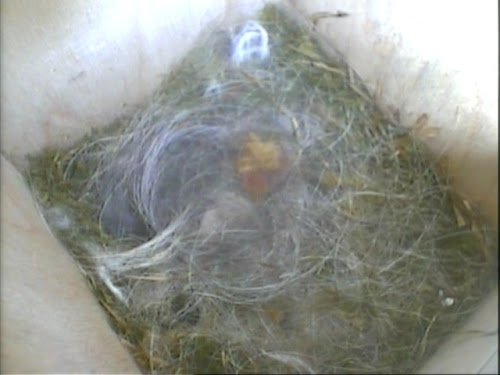 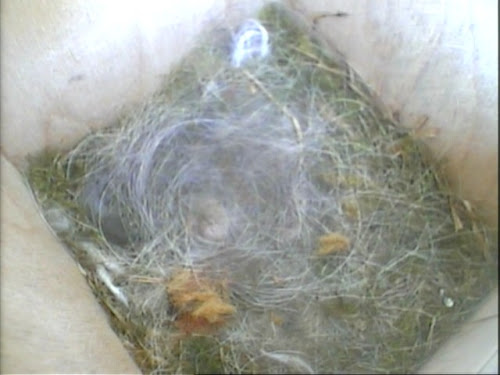 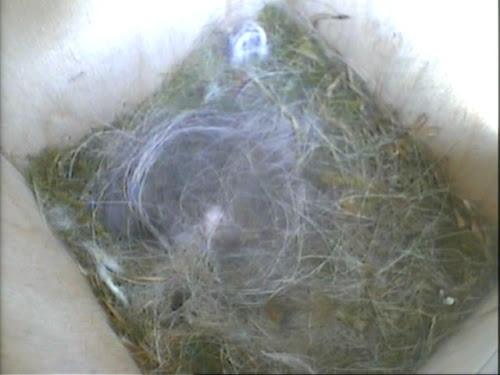 Now, if I hadn’t looked in first thing this morning I really would not have seen there was an egg there at all. Early evening the egg became more visible for a while again prior to the female settling down and roosting over it.

So what has she been doing in the nest today? Same old same old… bring material in and out and shuffling in the nest. Although, I have to say she has longer periods away from the nest now. I expect she will be enjoying her freedom for the next week or so.

The video above shows her shuffling over her egg. Now the count has started and I wonder how many eggs she will lay. We had eight last year so I guess it will be around that number. I so hope they all hatch and the chicks survive this year – fingers crossed.

The photos and video shown above were taken from my Camera Nestbox.

7 thoughts on “Let the count begin…”