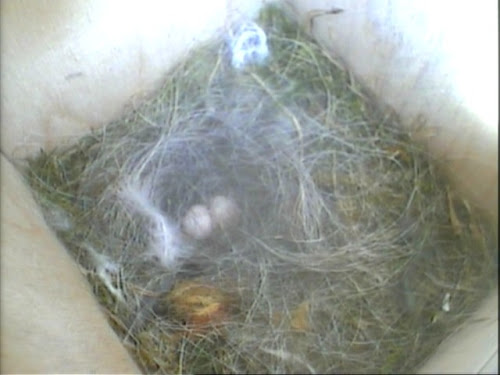 This morning I didn’t want to see two eggs when I looked in our Nestbox. Instead I was up early at 5am hoping to see the female sitting in the nest cup ready to lay her second egg! Last year they were laid around 5.30am so I thought I was up early enough. Ah… but she was awake early too!

I was just in time as after approx 3mins of looking in the Nestbox I recognised the behaviour from last year when I watched the second egg being laid then too. The female was typically breathing quite fast and then was seen pushing the tail end of her body down into the nest cup. She pushed lower and lower then lifted the tail up to reveal a second egg! What a clever girl.

Last year the female didn’t spread her wings as I saw this morning. Neither did she take quite as long ‘adjusting’ herself. Mm… I am wondering if the female this year has more than 8 eggs. This year’s Mum-to-be didn’t appear to breath quite as heavily prior to egg laying as the female last year either. She also didn’t have a nap afterwards. This does look more hopeful. I am guessing we don’t have a first time Mum. I am also still wondering if she is the same female from last year.

It is absolutely fascinating to be able to watch nature quite so closely. Without cameras like this we have no idea of what goes on. Oh… sorry didn’t I say? I have video footage to show you too.

This year’s male blue tit is very attentive. I’ve yet to capture him feeding the female but I’ve seen him doing so in the garden and leaving the nest box. I also see him trying to come in at night to find her asleep. He is also on guard in my garden still chasing away other birds. He gave me grief at the beginning of the week sitting on a tree branch above me as I was clearing my shed – what a racket he made!

He now appears when I am in the garden but sometimes he is just heard singing his little heart out. He has also called and called for the female when she has been out of the Nestbox. Let’s hope between them they find enough food to feed their chicks this year. It was so sad to watch them look in vain last year and resort to bringing in sunflower hearts – which was not at all suitable and they nearly choked one tiny days old chick as we watched.

Today, BBC News reported on their webpage on how the Great tit has adapted to our changing climate. I thought it might be of interest to some readers. Below I’ve included some excerpts from their page. You can read the full article here.

“Researchers found that great tits are laying eggs earlier in the spring than they used to, keeping step with the earlier emergence of caterpillars. Writing in the journal Science, they point out that the same birds in the Netherlands have not managed to adjust.”

“Three years ago, Marcel Visser from the Netherlands Institute of Ecology in Heteren collated a number of these cases. The North American wood warbler has not adapted its migration pattern to the earlier emergence of caterpillars in its breeding ground, and the Dutch honey buzzard is also failing to adapt to the earlier appearance of wasps, which it eats. The red admiral butterfly is arriving on the UK’s shores earlier from its winter grounds in north Africa; but the staple food of its larvae, the common nettle, continues to flower at the same time each year.”

“The great tits are laying eggs now about two weeks earlier in the year than they were 47 years ago. The timing is crucial, because for the two-week period after they hatch, the chicks have to gobble down huge quantities of winter moth caterpillars which only emerge for a short period.”

“Great tits have eight or nine babies in a brood, and each of them will eat about 70 caterpillars a day. The chicks hatch and are fully grown within two weeks, so they need something that’s really abundant – that’s why they synchonise their breeding so hatching co-incides with the emergence of the caterpillars.”

“Their movement to an earlier breeding time does not involve an evolutionary change, the scientists believe – it is simply that individual birds are able to change their behaviour, in the same way that they have presumably adapted to warmer or cooler phases before the era of human-induced global warming.”

““The UK finding is to some extent surprising in that the birds are using the same old rules, but the rules still work,” he told BBC News.”

I wonder what rules the smaller blue tits in my garden are using this year. The female has laid her first egg 8 days later than last year. As this is only the second year that we have had a Nestbox with a camera and the third year of having a Nestbox in the garden I have no idea what ‘normal’ dates and times are.

However as a gardener I feel we can try to help nesting birds by providing a wide variety of trees, shrubs and other plants both wild and cultivated in our gardens. I have tried to help this year by buying two climbing roses especially with the blue tits in mind. I am a gardener that is looking for greenfly on rose buds this year!!

Finally, to all gardeners and visitors looking for postings on plants. garden birds and wildlife please do continue to visit as I don’t intend all postings to be on the Nestbox until nesting is over. There will definitely be times when there will be daily postings on the Nestbox. However, I will try to make them short and will include postings on other happenings in my garden too. I also need to spend more time in my ‘actual’ garden too. Ah… this is a great time of year to be lucky enough to have a garden. Enjoy yours this weekend!

The photo above was taken at 4pm this afternoon and the video footage between 5.05 am and 5.20am this morning.