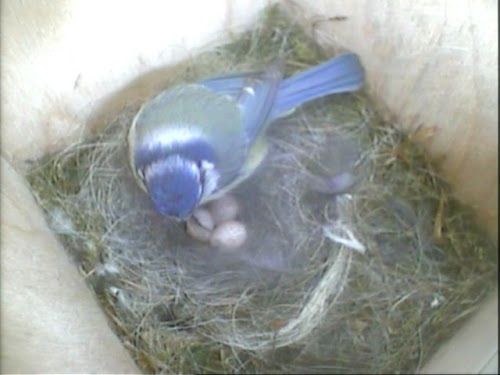 Saturday morning saw the third egg in our Camera Nestbox and quite a clear view too when I first looked. However, looking in today it was a bit tricky to see if there was a fourth egg or not. Although she is laying one egg per day it is possible she could have a morning off. I eventually had a clearer view as you can see below. The black and white photo was taken at 6pm tonight. I have noticed that later in the evening the eggs are uncovered. So for the moment things are going as expected in our Nestbox.

What I have also noticed this year is that the male is much more attentive. I have seen him feeding the female on many occasions. Eventually I caught some footage in the Nestbox yesterday. You will notice in the video below that the female appears to know when the food is coming. Is she saying ‘Hurry-up’ or ‘Thank-you’?

The male made repeated visits in this occasion. Notice that on one delivery he stayed longer. The female clearly didn’t get all the food he had to offer and instead of eating the rest himself he waited for her to take it. His job was done. Off he went for more! This year the pair really appear to be ‘a pair’ so that makes me feel quite positive for them.

However, and this is a HUGE however I have not seen a single caterpillar being fed to the female. I had never thought about this until I received a comment on my last post that mentioned ‘beaks brimming with green caterpillars’ going into a Nestbox to feed chicks. I wasn’t considering caterpillars yet as we have no chicks but I’m sure the male would bring them to the female if there were any. Mm… I have to confess I have now gone from positive to worried.

You would think that the birds would adapt if they couldn’t find caterpillars to feed their young. They tried all sorts of bugs last year. Let’s hope that my Ivies can supply plenty of spiders and other insects and that my contribution of two roses planted near the Nestbox will have insects interested in them.

I also hope that I get a lot of blossom on my pieris shrubs this year as I have seen the blue tits at these flowers in past years I guess there must be insects there too. Last year wasn’t good for the pieris in my garden but it is looking good at the moment with lots of red foliage. I dearly hope this will all be enough. Having a camera in a Nestbox doesn’t mean its all happy viewing as you share the sadness with the pair too. Fingers crossed once again.

The photos and video above were taken in the camera nestbox in my garden on may 10th &1tth 2008.

7 thoughts on “Eggs three and four”