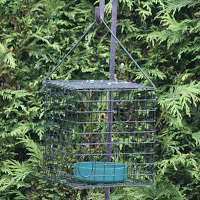 Yesterday morning there were five chicks in our blue tit Nestbox. I was really quite positive for them. They appeared strong and alert. However when I looked in the Nestbox during the evening we could only see four and they looked much less alert.

This morning we now have four chicks 11 days old. I am sure they are smaller than they should be at this stage. The female has to search for food herself and some days can leave the nest for as long as ten minutes and come back with only enough for one chick. I have no doubt if the male was around to help find food the chicks would be much bigger.

Although we have had some rain on the whole we have had warm sunny days recently which have to help the female in her search for food. The video footage shown above shows a feeding moment two days ago. You can see that the ones with bigger mouths do get more food. You can also select the button to see the video full screen. The chicks have now started to make quiet chirping sounds and make this when the female is feeding, away or even sitting on top of them!

Fat sprinkles are continuing to supplement the spiders as a food for the chicks and I have only once seen a caterpillar go in during the morning the first chicks hatched. I couldn’t see if they were interested in it or not. I introduced another feeder that took a few days for the female to explore but it has enabled me to put out live mealworms and sprinkles with the bonus that the starlings are unable to get to them. Of course they still try! I only wish the female would try the mealworms.

I am very grateful to have the feeder shown opposite. This was very kindly loaned to me by an RSPB Volunteer to use for as long as I needed it. I had been telling her about my plight to find a way to put out the mini live mealworms.

Thank-you so much Lyn! I really believe that this feeder went up at a crucial time for the chicks. I still couldn’t say if they will all survive but I know feel happier that there is at least an extra food source available for them.

Lyn also wrote down the names of two websites where I might get feeders that are especially good for smaller birds. In the first one Haith’s I spotted Lyn’s feeder so I now intend ordering one for myself and will be able to return it to her. It will be an excellent feeder when juvenile birds from other nests come to my garden.

Interestingly enough this company just contacted me this week saying that they have regular features written by Bill Oddie (bird/wildlife enthusiast and presenter) and Jenny Steel (wildlife gardener) suggesting that may be of interest to my readers. Interestingly once again Jenny was one of the first sites I approached to exchange links with. Perhaps my readers outside the UK will have heard of Bill. At the moment he is on our television screens as a presenter for BBC Two’s Springwatch. I have been enjoying watching the progress of other nesting birds in this programme.

There has been some very strange bird behaviour too including a swallow male deliberately dropping the newly hatched chicks out of their nest! It has been suggested that these chicks are not his. He then tried to mate with the female and proceeded to build a new nest! Nature certainly throws up the unexpected when we can watch it more closely.

So what about our blue tit chicks? Well, I am worried that the female isn’t bringing food in more regularly. I have noticed that if she comes in with food in quick succession the chicks are much stronger and alert. When she leaves them for ten minutes (too long I’d say at this point) they get tired calling for food and slide down into the nest. Then when she finally comes in with food they don’t show as much interest in it. She also has spells sitting on them too and if there was a male looking for food at that time things would be much better.

Another point I should make is that the female does spend a lot of time diving into the bottom of the nest. She will be cleaning the nest of any unwelcome insect pests like lice. When any chicks die she removes them from the nest to keep the nest clean. Maybe there is a problem with pests in this nest and I expect the weaker chicks will be more vulnerable.

On saying all this I also expect if the female found a good food source close-by that the chicks would thrive. Although I have put the live mini mealworms (in the feeder above) the female still appears to only be taking the fat sprinkles from it.

So, for the moment as we look into the Nestbox we find ourselves comparing the situation to last year where the chicks got weaker and weaker. However, on the positive side we can see that the chicks are larger at this stage. We would love to see them open their eyes this time. All they really need is more food and then the picture will really be quite different. 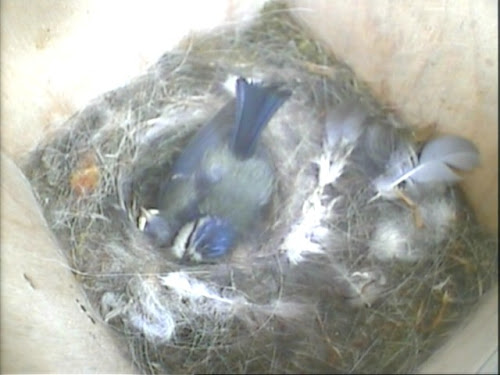 Finally, the last photo above was just taken now as I go to post this. The chicks are finding some strength to push up beside Mum. This photo does look very cosy but the female didn’t stay there for long. Out she went again in search of food – or perhaps a moment of R&R!

4 thoughts on “Chirping for food”