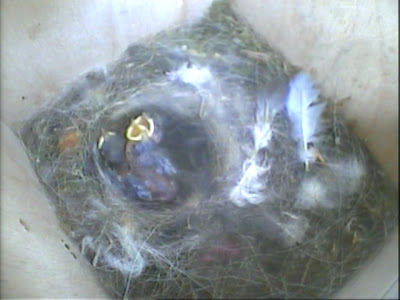 Well, I would have said it was against all odds that the three remaining blue tit chicks in our camera Nestbox were still alive. They are only being fed by one parent (the female) and her food deliveries are nowhere nearly often enough. I timed her over an hour during the last couple of days.

Incredibly she only brought food in nine times in the hour and sometimes only gave this to just one of the chicks – the other two were left even longer for food. In all honesty I now look in this Nestbox not really knowing what I will see.

This morning I was delighted to see that it looks like the chicks eyes are opening – this has been very interesting to watch. They are turning their heads around a lot. I expect the brighter light in the Nestbox at this time of the day will be catching them.

Something else looks like it is catching them too. I am pretty confident now that there are parasites in this nest. I know the female tidies up a lot – digging way down into the bottom of the nest. You can hear her tapping on the wood of the Nestbox floor. 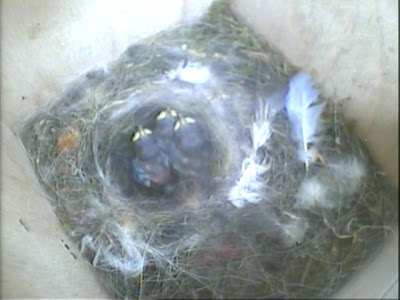 However, the chicks are often seen jumping in a jerky fashion when they are on their own too. I have also been watching the biggest of the three chicks pecking under its wings as I have seen the female do. I am completely new to this stage in the Nestbox but I would guess many nests have parasites and chicks do survive.

Okay, I have one more concern for these hungry chicks – the ‘always hungry’ starlings! The tone of the chirping of the chicks is changing and getting louder and this morning they definitely responded to changes in light levels thinking the female was coming in the Nestbox – it was a starling on the roof. If the starling shows interest when the female is there then she will protect them. But if they are hungry and get the strength to get out of the nest cup… yep, you can guess what will happen next.

Finally, I am not going to predict the outcome of these chicks as now I am in completely unknown territory. They still look far too thin to me and I am guessing that they will need a lot more feeding as they get bigger. The female is still not using the live mini mealworms and doesn’t appear to have found the greenfly either. She searches the front of my Leylandii hedge yet within a metre of the Nestbox there is a pergola covered in ivy with spiders etc – the great tits search there. So what will happen next – we will just have to wait and see!

The photos above were taken from my camera nestbox on June 8th 2008.