Wildlife cameras give as a wonderful insight into nature and I am certain that through television programmes such as BBC Two’s Springwatch many people have been inspired to watch the drama of nesting birds in their own gardens too.

Nestboxes with cameras are readily available now in the UK through the internet, garden centres and wildlife shops. It was after reading Peggy’s Diaries a few years ago and then through starting my own garden diary that I considered putting one up myself. I wonder if you can guess what’s going on in the two photos below? I was completely fooled by the second one. 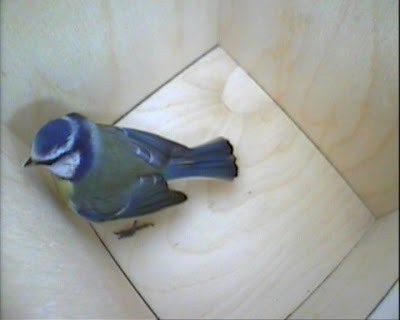 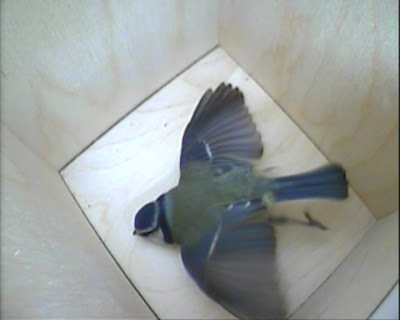 What time of year should you consider putting up a Nestbox? I’m sure the birds won’t mind when you put it up as long as it is available for nest building. However, although nesting is in Spring pairs can start ‘viewing’ nestboxes as early as January. I’d say September/October would be a good time to put up a Nestbox.

Why so early? Well, during the winter months smaller birds can use them to roost in. We had a rooster last year (Blue tit) from the end of October all the way through to nesting. This bird may have been interested in nesting too but we had another pair that finally took ownership of our Nestbox with a camera. It was fascinating to watch and I’d definitely call it a drama!

There are a number of websites and blogs that show excellent video footage with nesting diaries. Some of the links below already appear in my right column of links. It is great to have a list of links but I completely understand how long browsing can take. I hope the additional info here will make it easier for you to choose the nests that you might be interested in following. Although I might guess you’ll take a peek at them all – I know I would 😀 Enjoy!

Finally, if you know of an interesting website/blog with diaries of nesting birds or other nesting wildlife outside the UK please add a comment with a link here. I am sure there are a number of people (including myself) that would be interested in seeing them. Thank-you 😀

The photos above were taken in my Camera nestbox during March 2007. The video above was taken just two days after our Nestbox was put up in March 2007. We couldn’t believe that our first visitors were a pair of blue tits who actually went on to nest build. Eight eggs were laid but sadly no chicks survived.

6 thoughts on “Nestbox diaries and links”