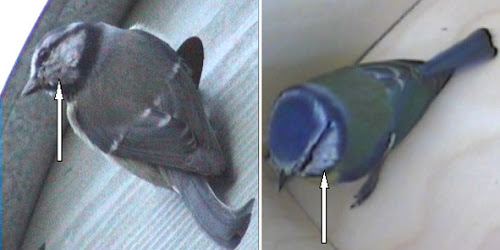 …they are seen going in and out of nestboxes from October to February? They can’t be nesting then can they? Possibly they could be stating their intention to use it in the Spring. Ah… but the blue tits that freely nest in nestboxes also use them to roost in over the winter months. Do you think you have a rooster at the moment and how would you know?

We had a roosting blue tit in our Camera Nestbox from the end of October last year. However, when it came to January we also had a blue tit pair interested in the Nestbox who visiting during the day. Eventually when that female decided to roost in the box (to definitely state her claim to use it for nesting) there was a bit of trouble and the winter rooster was off. So it doesn’t mean that a rooster will finally nest in the nestbox.

Last year, as per suggestion by the RSPB, I put some wood shavings on the floor of our camera Nestbox after we cleared away the used nest. Is this really necessary I hear you ask? I guess not although I do plan to add some to our new camera Nestbox soon. What about our Arch Nestbox without a camera? Oh… I don’t think I’ll bother adding any to it. Can you guess why?

Yep… once again our Arch Nestbox without a camera has the interest of the blue tits. I thought I’d seen a bird go in it during the last couple of weeks but last Friday it was very clear something was going on. But what was this bird doing?

You can see the frequency of the visits in the video above. For those who cannot view my video, I watched it go speedily to the trees and return. In and out the Nestbox it went on this cold windy October day. Wait a minute… I recognised this behaviour. Ah… the penny finally dropped as I watched closer.

This bird had something in its beak and it was going straight to a branch of a tree and dropping it just as I saw during nest building earlier this year. However, it wasn’t building a nest – it was clearing away the unused nest! Clever little bird. Okay, so I don’t think I’ll add any wood shavings to this box.

There is no camera in my Arch Nestbox so the only way to confirm my suspicions of a rooster was to set up my video camera outside the entrance in the evening. You would likely miss this if you sat and watched. The time to see this can vary a little but once you see it once you will have a guide when to look – 20 mins either side I’d say.

The first two clips in the film below were taken sometime between 6.25-7.55pm but the last clip was after 7pm probably as it was a warmer night. I didn’t alter the lighting so you can see the differences. So now I would say with three clips showing three consecutive nights of a blue tit going in this nestbox I have confirmation of a rooster there at the moment. I should also add that I captured a fourth night after I edited my film. It’s a pity we can’t see inside isn’t it? We have a side opening in this box and we opened it this morning to see if there was any moss left and all that could be seen was a few bird droppings most likely from the roosting bird.

In Spring we wanted the enquiring blue tits to choose our Nestbox with a camera so we could see and share what was going on during nesting. However, I still feel that it may be a little early for roosting in my area and it is very likely that another bird might take a look inside it our Camera Nestbox so I am still hopeful. Oops… but what’s this below?

I am delighted to be able to share the first video capture from our new Camera Nestbox and what an interesting piece of film this is – can you guess what is going on? What is the bird doing lying on the floor?

When editing my video clips I do see them again and again so I am at an advantage. I believe it is surprised by the light levels in this Nestbox and it is looking at the ceiling! Why the surprise? Well, I am certain this is the rooster from the Arch Nestbox and it must be a lot darker in there. I found it amusing to watch – you have to wonder what it was thinking. Oh yes… and after the closer inspection of the camera you can see that blue tits are very curious and agile little birds!

My first challenge after seeing this new footage from the camera box (taken on the same day the roosting blue tit cleared out the arch box) was to compare the two birds. Why do I do this? Just simple curiosity I guess – although it does take some time! I grabbed video frames of similar angles of the two birds which you can see above.

I convinced myself that there was a similar dot marking in the two birds as I watched them. However, after final editing of my videos I spotted there was also a misplaced strand of a feather that was common to both so that confirmed it.

Finally, I have to say find this slightly scruffier looking blue tit quite a character and I do hope we see more of it. I am also wondering if it has a mate that will eventually join it to roost in our Arch Nestbox – now that would be interesting to see! Fingers crossed that we will see some action via our Camera Nestbox too and it looks like these two nestboxes will open up extra interest in my garden once again – the stories begin! Enjoy your nestboxes.

The video footage and photos above wer all taken between 3-5th October 2008.

10 thoughts on “What are birds doing when…”