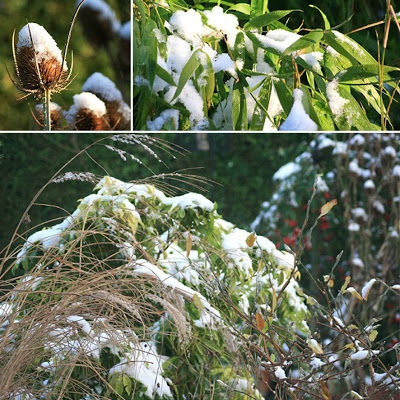 Let’s start with the plants. Well, as you can see below they have a small covering of snow. It had been forecasted to fall overnight but it was still a surprise to open blinds this morning and see it covering the garden. I love to see the look of this sort of amount – not too little and not too much!

A bird count had been planned for this morning but after watching them a little while I was more drawn to get outside and take some photos. I stood for a while watching the one feeder for the coal tits – they just have to be the birds of the garden for November. They are often seen hiding snflower hearts too in moss, borders and in the lawn. How funny they are too watch – I wonder if the similar looking American Chickadee does this too. We have three regularly visiting chasing each other and other birds away from the feeders.

Ah… I nearly forgot about this – the possible new bird sighting! I saw it only the once – the day my daughter went into hospital. Then for a number of days I was nowhere near the windows I watch the garden from. It may have come back but it was the cheeky Coal Tits that chased it away that day. I am not certain, I have no photos but by the way it moved around my small pine tree, the buff colouring of its underside and its size and shape – I do believe for a fleeting moment I saw a Goldcrest visiting my garden! 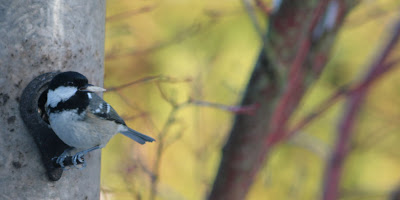 What was visiting this weekend then? Well, as they say, the usual suspects. I did do a bird count on Saturday from 10-11am but I knew this time was likely to show fewer numbers but a fuller variety of species. I must highlight two woodpigeons here, before I list numbers, which simply watched each other and moved around as if they were playing a game of chess! They never took food from any feeder in the whole hour.

Blackbirds, including one partial albino, took the top slot for my count with eight. The Chaffinches were next with six, and then there were three Coal tits and three House sparrows. Two Blue tits, Great tits, Dunnocks and Greenfinches were followed by one Robin, Goldfinch and one solitary Starling. Now, I do wonder if this Starling was a scout for a group. It did not return after a failed attempt and getting food from a caged feeder with fat balls inside. It wasn’t the only one that failed with that feeder either.

Next, to the wildlife in the garden… what has been going on in ‘Hedgehog Manor’ and are hedgehogs still visiting the garden at the moment? The video below shows visits to the ‘Evening Buffet’ available at Hedgehog Manor last week. The first clip shows it was a wet night and really what respectable hedgehog would dine Al Fresco when there is an alternative?

A second video capture was taken the evening we made the two hour drive to A&E. I don’t remember much about it now except that I was testing my newer night camera shortly before at around 6.30pm. It looks like the hedgehog (I am guessing the resident one at that time) was at the buffet when someone went outside. Legs go by, outside lights were on and go off again – notice the hedgehog just hides its head and doesn’t go into a ball. It must feel safe in there.

Ah… but is it? Mm… the hedgehog was not the only wildlife visitor to be seen visiting that day! Earlier on, this Thursday the 13th, at around 9am the garden saw the return of a not so popular visitor to gardens. I was joined for breakfast by a grey squirrel – the most curious one I have ever seen in my garden. I opened the window as it went from the food under the small Acer tree to the house wall. As I opened the window and peeked out at it, it moved right up to the window and looked closely back at me! I quickly shut the window again.

Well, at first it appeared to do a recognisance of the garden ending with a very cheeky thump with its claws on the window where I sat watching what it was going to do next. It clearly meant it for me. What thumps it gave the glass and what a fright it gave me! 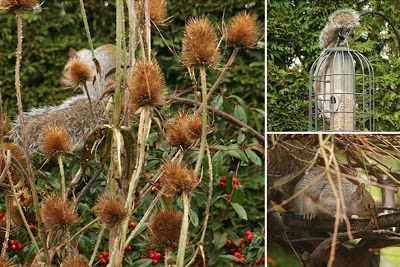 Next, it really used my garden like it was an adventure playground. There was nothing that it didn’t jump off or run along! It paused a moment to take food from the feeder under the Acer tree once again and the Blackbirds and Dunnocks weren’t really sure what to make of it but some moved warily towards food nearby.

Ah… but they weren’t the only ones watching what it was up to. The Blue Tit roosting in our Arch Nestbox quickly claimed its home. The squirrel came quite close too as the blue tit watched it from the entrance hole. Was anyone safe? A jump down on to my hanging basket, a run along the trellis and of to the main feeders it went. This time it meant business. The roof of the bird table was wet so it slid off down into the shrub below. Next to the hanging feeders. Ah… but the caged feeders stood up to the test! 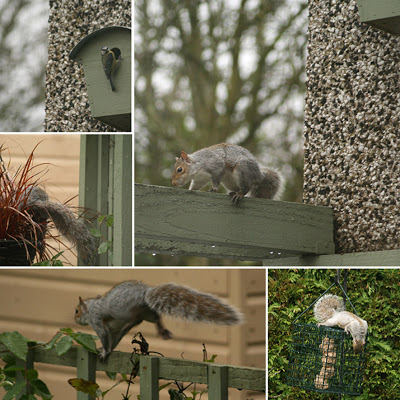 I have to say, I just had to watch as I was concerned if I tried to scare it away it might go into the back where a hedgehog was. I watched it move towards this area but fortunately I didn’t see it exploring there. It did however jump up on and off the bricks inside a number of times – it was a very, very curious squirrel. I wasn’t at home until later the next evening. My younger daughter saw it the next day. Then I saw it briefly the next. It hasn’t been seen since. I had this last year in December where we had visits by one squirrel for a few days and this has been the first sighting in my garden of a squirrel since then. Maybe others have seen this too?

So are hedgehogs still out and about at the moment? Well, that I am not sure of. A few nights ago I put food outside Hedgehog Manor (in addition to the buffet inside) for any passers by but it was only taken by birds the next morning. However the night before my blog was ‘Two’ I did put out my video camera (set on the 0lux setting) on a very low tripod and captured some footage. Unfortunately when I revisited this blog in August 2020 to add the text warning about feeding hedgehogs, I have discovered all videos in this post have disappeared as they had used flash. I am not able to restore them.

So does Hedgehog Manor have a hedgehog in residence hibernating? Again, I haven’t been too sure – until tonight. The photo capture below shows there is condensation inside (the white marks). It is a cold night so this would suggest to me there is something inside generating heat. I went out to take a closer look and noticed some food had been taken. Perhaps another hedgehog came inside to the buffet but I am wondering now if our resident has woken up, eaten and then headed back to sleep. I hadn’t seen this condensation for quite a few nights now and did consider something had happened with the squirrel and it had left. I am now pleased to say it looks like all is well and yes we have a hedgehog in residence! 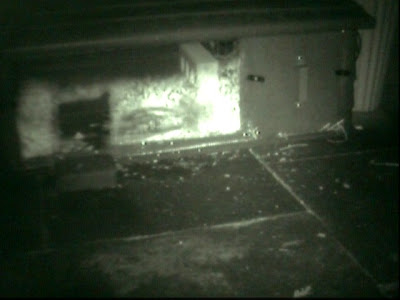 So what about the unexpected email? Well, I am absolutely chuffed to little bits that BBC Countryfile Magazine has chosen shirls gardenwatch for their ‘Blog of the month’ for their January issue. Urban Extension was chosen for their December issue too – congrats Jane. I had no idea that this magazine did this – what a great idea.

Almost done now, however I would like to add a wildlife sighting ‘first’ to this post. Not in my garden, but on the streets of Aberdeen between 2-3 am in the morning as we looked for somewhere to stay following our A&E dash to see our daughter. Driving up to a junction we took a second look as we spotted a fox just casually walking along the pavement like it owned it! It didn’t run away or hide. It clearly knew exactly where it was going and walked on by! I have never had such a clear view of a fox and what a fine looking animal this one was. What a beautiful colour too. This fox, in all honesty, looked like a well looked after dog. I wonder how many foxes live in cities – I bet they all don’t look like this one.

Finally, I would thank everyone for their kind wishes towards my daughter’s recovery. She is making some progress now I am glad to say.

All photos shown above were taken in my garden between November 12th-24th 2008.