There’s been a whole load o’ shakin’ goin’ on in da house! Since the first visits seen via a camera in our hedgehog house it has rained heavily in the evenings. A larger hedgehog has been visiting but so far no more napping has been seen…

Crushed peanuts and their skins have been sticking to this wet hedgehog’s nose too! Although they aren’t the only ones taking shelter from the rain… look out for the daddy-long-leg spiders climbing up the wall in the foreground.

So, its loads o’ shakin’ an scratchin’ too goin’ on in da house…

This scratchin’ didn’t set off any alarm bells until tonight. The larger hog visited quite early at just after 9.30pm. The ground was wet but it wasn’t rainy so the video below doesn’t show any shakin’ just the scratchin’…

Just by chance I discovered that the hedgehog above actually has ticks… it is clearly seen itching one behind its ear. Now, it is clear when you notice it… but it was a couple of black marks (probably earth or plant material) that made me Google images of ticks to see what they looked like. Only when editing the clips I suddenly saw this hog had them. Oh… ah… it made me shiver at the thought!

Screen grabs from the video show one white bead (tick) in the top, centre in the photo below followed by the hog scratchin’ it with its back foot. 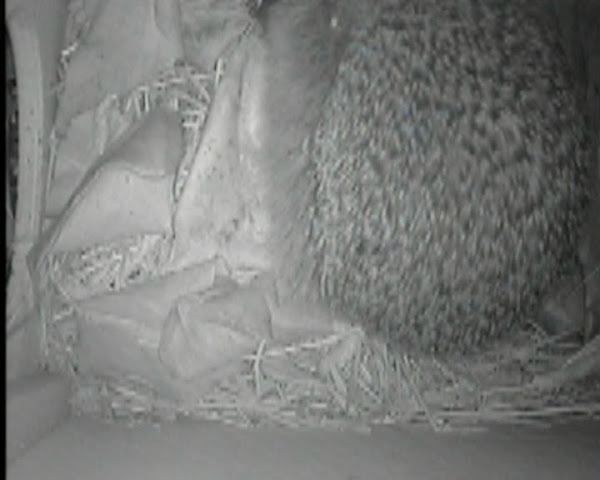 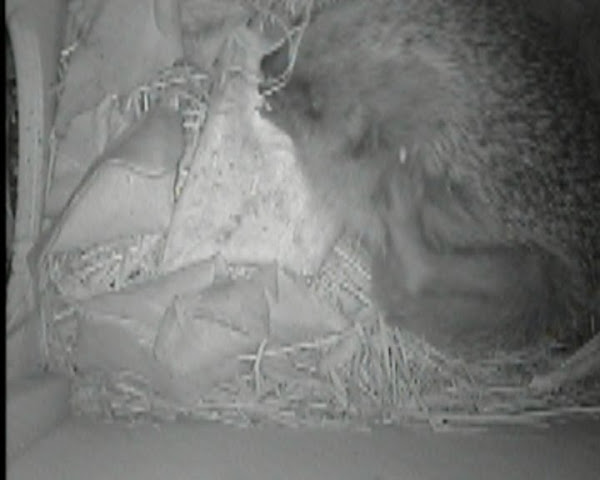 The British Hedgehog Preservation Society say: ‘Blood-sucking ticks are often found on hedgehogs and after taking their fill of blood, will drop off the host in order to complete their life cycle. Removal of these ticks is a difficult task but can be accomplished by dousing the ticks in olive/almond/cooking oil. Removing these ticks with forceps is to be avoided as the inexperienced may leave the mouthparts and head in the skin that may turn septic.’

Looking for more images The European Hedgehog Website shows photos of the ticks on hogs and details other health problems… I might suggest you don’t look at their page if you are about to eat! They say ticks ‘…attach their heads to the Hedgehog’s skin. They can be found around the face, often behind the ears. They can also be found around the tail and skirt. But they may also be found anywhere else on the Hedgehog. A Hedgehog with more than 12 Ticks will get Anaemia, which will severely weaken a it. A Hedgehog with more than 30 Ticks has a very poor chance of surviving.’

So, extra gardenwatching will be required here… although I don’t necessarily relish the idea. I fully understand in nature this hog would just have to get on with it. However, hedgehogs are on the protected list here in the UK and do need our help. I’ll keep you posted. I don’t plan to intervene unless absolutely necessary.

This morning I discovered, through a comment from Hog Blog that I’d missed a video he had posted last week showing a hog with a tick where he dosed the tick with olive oil – full colour and commentary on this video too!

It is very doubtful that I’d ever have the courage to do this myself so I asked if he wouldn’t mind me showing his video here to let you see it too. You can find his posting here for more details.

Filming wildlife and specifically night time filming is not without its problems technically. Earlier this year my first trusty basic IR camera failed on me and sadly the same has just happen at Hog Blog tonight too… different problem. Hope he gets his sorted as it would be a shame for everyone who tunes in for almost daily hedgehog TV on his blog!

Recently, John at Midmarsh Jottings also had a problem with rainwater and his cables but today he shared some sad news about a sick hedgehog that he named ‘Hope’ that he took to a local rescue centre. Sadly she hasn’t survived.

Watching and filming these endearing wild animals night after night, GL (Hog Blog), John and myself cannot help but get attached to ‘our’ respective regular hedgehogs (no pun intended). We are not alone either by the emails and comments we receive. There is just something so magical about these animals.

All video and photos above were taken in my garden over the weekend with the exception of the last one. Thanks Hog Blog for permission to show your video here.

22 thoughts on “Raindrops keep falling on the hogs”