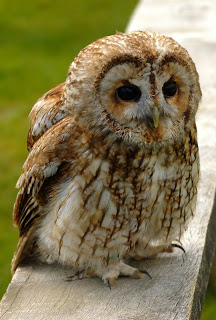 I’d like to thank everyone from the comments on my posting, the replies on my Birdforum thread and all the emails I received especially from people new to my blog.

It gave quite a buzz here as they all came in and when the BBC Autumnwatch programme last night also featured the Tawny Owl (with one in the studio too) I couldn’t believe the coincidence!

More emails followed asking if I had seen the programme… how brilliant that was too! The call I heard from my garden was from a female Tawny Owl.

This morning I began looking for info on the Tawny and found some very interesting stories so I’ll come back to it in a fuller profile posting of this bird.

What I will add briefly here is that the BTO want to hear of any Tawny Owl sightings (listenings more likely) for their Tawny Owls – Autumn Survey 2009 and they have a page with links to Tawny Owl calls you might hear in your garden, parks, woodlands or walks which will help you.

It is great fun watching the comings and goings of birds to our gardens when we are able to do it. My garden has been pretty static over the summer with fewer sightings of birds feeding from the ground and food being wasted there. Now it’s into gear again and everything is getting interesting again!

Yesterday, as I was writing my posting, a familiar flight pattern that I haven’t seen for a while caught my eye out the window… the bumble bee and bobbing characteristics of the tiny Wren.

Normally the Wren is more secretive hiding in the undergrowth but here it was exploring the feeders in a rain shower! I had to be quick with my camera and my pics are not the best as I didn’t change the previous setting for very dark conditions but I still wanted to share them. 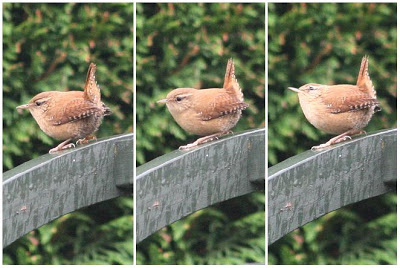 Would you believe it… today I spotted another bird that caught my eye as I was looking for info on the Tawny Owl! Would you also believe it that I never learned my lesson from yesterday and hadn’t changed the setting on my camera! Once again though, I wanted to share the capture of a female blackbird eating the berries on my Cotoneaster tree… as she had a berry in her mouth! 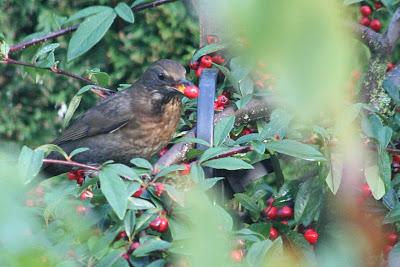 Yep… the garden is definitely changing at the moment and if you don’t gardenwatch already it’s a great time to start now!

Wishing you a great weekend in the garden and out and about. Oh… and remember your camera (and its settings) too as you just never know what you might see 😀

The Tawny Owl photo above was not taken by my but from Wikipedia. Details of its licence can be seen here .