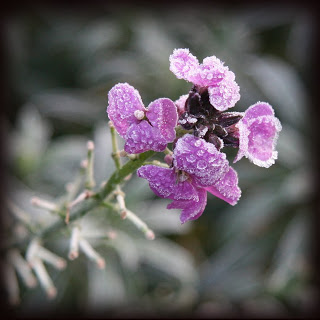 This morning the perennial wallflower Bowles’ Mauve was standing up to the cold carpet covering my garden overnight. I went out with my camera to get photos of it as I have no idea how this plant will do over the coming winter months. However, it looks like it could beat penstemon ‘etna’ to be the last flower standing for this year!

Bought in flower back in April this wallflower still appears to be pushing up new flower buds even now.

However, as I don’t know if they will open I have avoided cutting back the almost past flowers which would give the new ones a chance to open. I have thoroughly enjoyed this plant in my garden. What an addition it has been. I’m only sorry I ran out of time and didn’t take any cuttings from it.

Knautia ‘Mars Midget’ can be seen in the centre of the top row in the montage below between the wallflower and penstemon. I’ll also be watching how this plant does with the cold too. It has had a very late second flush of flowers but its stems were bent forward with the cold unlike the penstemon and wallflower. I guess it will take third place in the last flowers standing. I wonder if it will be around on the 15th. 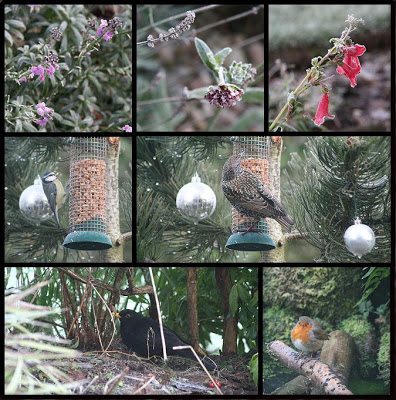 Back inside in the warmth, I sat breakfasting at my window watching the birds. They too were eating. As you’d expect on a cold day, the feeders were very busy. My garden had a hurried buzz about it.

The baubles decorating my pine tree don’t appear to be bothering the birds at all as they enjoy the peanuts in the feeder also hanging on it. I’ve peanuts in seed feeders too and I’m guessing that’s why the numbers of blue tits have increased recently.

Starlings are also starting to appear in increasing numbers. Their visits don’t last long but they cause quite a bit of commotion all the same. You can see how small the blue tit is compared to the starling in the middle row above. If you click on this image it will enlarge.

Blackbird numbers are also increasing again and on a few occasions this morning they gave an alarm call and all the birds scattered into my hedge. Although, the one above decided to stay where he was under a shrub instead.

Winter scenes just aren’t complete without a robin and today this little chap above was chasing all the other smaller birds (except the blue tits) around. Now, this is the time of year I’ll start looking out for Blackcaps spending the winter up here. If any males do arrive that robin and all the other smaller birds will have a new bossy boots in the garden to deal with!

It’s minus 3C here just now so I suspect my last flowers standing will have a hard night ahead of them. Brrr… keep warm!

All photos above were taken in my garden on December 13th 2009.