As daylight hours grow by the day, despite the cold temps we may have, its time for nesting birds to search out nestboxes in our gardens. Perhaps you may already have seen activity like John at Midmarsh Jottings who also has cameras in two nestboxes plus one outside too see here.

Not many people have cameras in nestboxes, I know, so I’d suggest a good time to watch your nestboxes for any birds checking them out just now would be in the morning. Anytime between 9.30-11.30 am would be good. You may also get enquiries over the lunch time period.

So, with your new nestbox (or cleaned out exisiting one see info below) ready for tenants, it’s a waiting game. It’s the same every Spring.

As regular readers will know we have had (still have) a rooster in our colour Camera nestbox. Unfortunately we saw no nesting there last year.

We also recently put up a second black/white IR camera nestbox (courtesy of Ian at the Dobbies Blog) on a Pergola post. Naturally, I am eagerly awaiting the first visits inside. I have been hoping all week I’d have some visits inside to share tonight… but alas… not yet 🙂

We have had some enquiries though… although this blue tit only looked through the entrance. It was curious though! The photo below is a screen grab the video shown below. 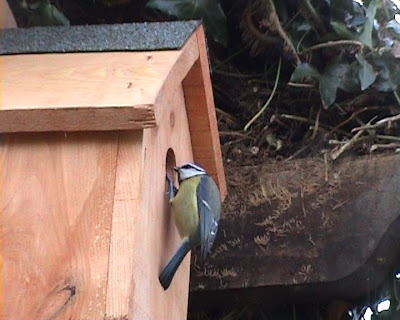 Fifteen minutes after this visit another blue tit came along. In the video screen grabs below the bird on the left is the first more curious bird. The bird on the right didn’t get to the entrance. The question is… could they be a pair? 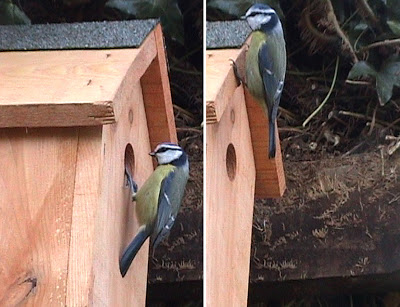 You’ll see from the video below that the second bird wasn’t brave enough to go to the entrance. Based on the patterns on the head, I don’t believe either bird was the one that is roosting in my colour nestbox. Roll the film…

No extra background music in this video.

Now, what do you think? I myself am curious if the camera attached to the roof is bothering it… perhaps making it wary of going inside. Our other camera nestbox has a false roof and the cameras are above it with the lens just sitting above the hole. They don’t seem to be a problem. An interesting one there. Time will tell.

Okay, how do we encourage the birds to view the inside? Some advertising perhaps? Sorry, couldn’t resist having a bit of fun with this. The sign went up yesterday… 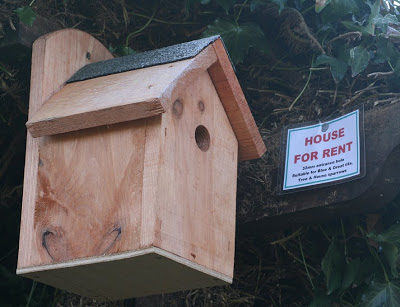 From inside, via my computer screen I could watch inside the box. The light flickered on a number of occasions both yesterday and today showing a bird was at the entrance considering coming in… alas still no sightings.

So, if you have a nestbox with a camera and you see a flickering image as shown in the below… don’t worry. Your camera is not faulty… this flickering is a very good sign! Birds are showing interest in your nestbox 🙂

No extra background music in this video.

Okay, so let’s consider viewing a property once again. What would put you off? Perhaps an over grown area in front of the property? 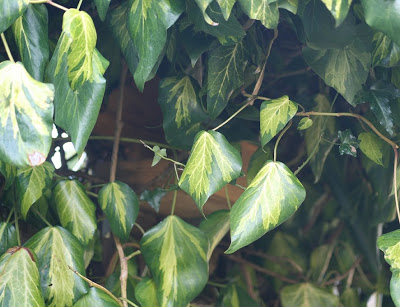 Once again, if your property is a little different than the others in the area perhaps a sign would encourage the right kind of tenants!

Regular visitors will know that it is most likely that Blue tits will use the nestboxes in my garden. However, back in March 2008 I put up a Blackbird nestbox under my pergola.

You haven’t heard me mention this since? Yep, no nesting activity seen here so far.

Like all properties that have been on the market a while, I decided to improve the first impressions… should any blackbird fly by now. Yep… the pruners came out and I enjoyed a bit of light pruning yesterday. 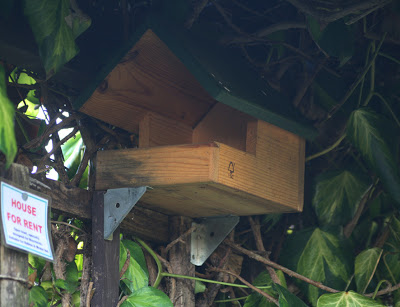 Don’t worry, the ivy will come back again, I’ll prune it again and it will make a neat compact covering. Looking above this nestbox you can see quite a depth of ivy growing there.

Now… you could take a guess that birds might consider nesting up there… if they have not done so already. 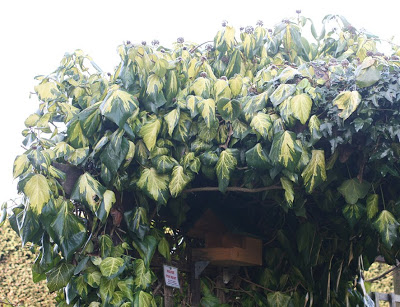 Before the plants properly kick into gear for the year it is great to have the interest that birds visiting the garden can bring don’t you think?

Finally, perhaps you’ve a nestbox in your garden already and wondering what to do with it just now. You’ve perhaps had birds nesting in it in previous years but not now. It could be that there is an old nest in there. I’d consider opening it up ASAP and remove it.

The BTO give advice on their site: “When cleaning out nest boxes it is advisable to wear surgical gloves and a dust mask. Old nests may harbour fungi growing on damp nest material, which can cause respiratory diseases. Nests can also house a variety of parasites such as fleas, lice and ticks. It is best, therefore, when removing the old nest to put this straight into a plastic bag and seal it before disposal.”

The RSPB also mention fleas etc : “The nests of most birds harbour fleas and other parasites, which remain to infest young birds that hatch the following year. We recommend that old nests be removed in the autumn, from August onwards once the birds have stopped using the box.

They go on to say: “Use boiling water to kill any remaining parasites, and let the box dry out thoroughly before replacing the lid. Insecticides and flea powders must not be used. If there are unhatched eggs in the box, these may be removed legally only between August and January, and must be disposed of.”

Back in 2008 it was awful watching the remaining three chicks of a brood of Blue tits (in our colour camera nestbox) twitch in the nest with parasites of some kind attack them. I’d definitely recommend a clean start for any chicks in your nestbox.

I’ll leave you with a much nicer thought… newly fledged chicks in your garden being fed by their parents. What a treat this is to see. Wishing you successful broods from your nestbox this year 😀

The photos and videos above were taken in my garden on February 20th 2010.