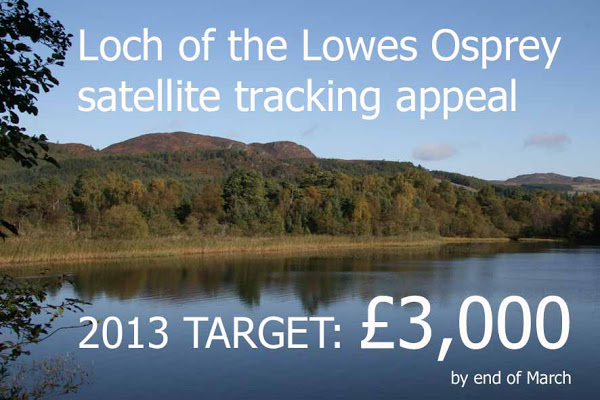 Today, the blog from SWT Reserve Loch of the Lowes shared the great news that the satellite tracking project for Ospreys here in Scotland was continuing into 2013! As I have followed the story of the Ospreys here on my blog, I’d like to help promote their appeal.

Although the news is great – the challenge in raising enough funds to order one satellite tracking device (approximate cost £3,000) from a manufacturer in the USA by the end of March is even greater! The tags need to be manufactured & imported in time for tagging in early July.

Ranger Emma, Jonathan and the team at Loch of the Lowes are hoping they will receive enough donations to continue this exciting project. They have gained a huge insight already as you can see from a recent reminder blog by Emma.

If you would like to support this appeal you can donate here selecting ‘Osprey satellite tracking’.

Next week could see the oldest known Osprey in the UK, affectionately known as Lady, return to this Perthshire nest for a staggering 23rd consecutive year! Her reign on this nest has been remarkable but if she does return can she still hold on to it? There are always other interested females turning up at this well watched eyrie at Loch of the Lowes.

The webcams are up and running for 2013 and anticipation for the breeding year and the return of Lady is high. I’m certain many of her worldwide followers will be glued to the webcam for the first sightings of an Osprey on this nest for 2013 with fingers tightly crossed for it to be Lady! Note: If you are a regular blog visitor I’ve added a picture link to this webcam in my sidebar – I’ll be usuing that link a lot myself this year 🙂

As for the tracking of Lady’s 2012 chick Blue44, after starting well the signal from his device stopped transmitting back in Dec 2012. Is he still alive? That isn’t known but many are wishing him so! It isn’t unheard off for the transmitters to stop for a while and then start transmitting again. Time will tell here, fingers crossed we will hear from him one day. As for the other bird from Angus that was tracked at the same time, he is doing well having found a favourite fishing spot along the river on the Senegal/ Mauritania border.

Closer to home, here in my garden, we have seen a pair of Blue tits visit our camera nestbox with some nestbox shuffles seen too which looks very promising 🙂

Snow and cold then followed as did the Yellowhammers. Yes… we had more than one visiting this time with two males and one female joining the ever increasing good numbers of Chaffinches. I was most surprised to see how late they fed at the end of the day too. I also noticed how they remembered the spot where the seed had been before the snow covered it and searched the snow when there was visible food in dishes. Definitely an interesting bird, the yellowhammer, which I must find more about and post new images soon 🙂