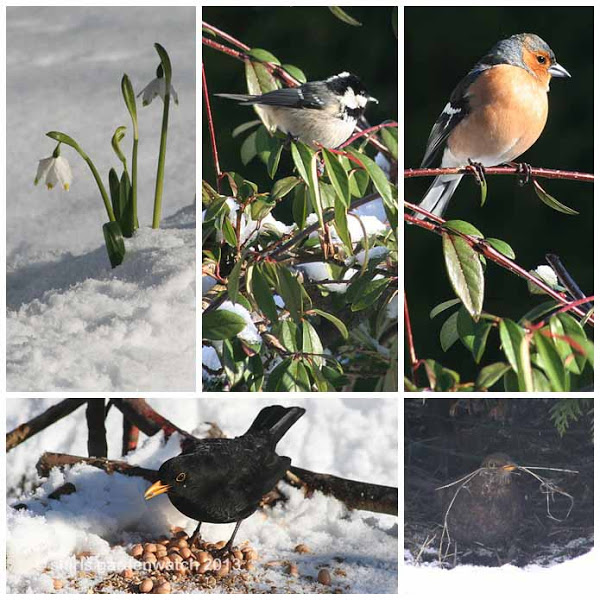 A snow covered garden for two weeks has brought some great garden watching as birds flocked in numbers to feeders. Fortunately Mrs Blackbird found nesting material under my hedge although I can’t imagine she really felt like making a nest in the cold days we have had here.

After the first garden sighting of a Yellowhammer back at the beginning of February it was great to see it back (in time for Mother’s Day) and this time he bought friends. I’ve yet to sort the many photos and video clips I took but I do believe there were at least three males visiting and two females. I was delighted to get a couple together – were they a pair? 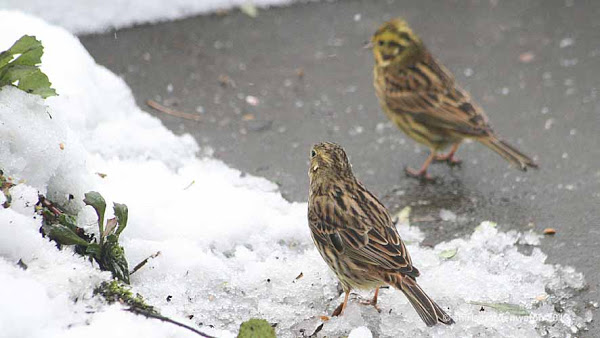 After taking my visits of daily Yellowhammers for granted, despite still having snow on the ground, they stopped yesterday. Yep… as the title says… and along came a Pied Wagtail!

Being honest, I never expected to see this little black and white bird with a long bobbing tail wandering around my garden. I was thrilled. I suspect the large groups of Chaffinches that bring other winter birds in to my garden feeders probably brought the Pied Wagtail (Motacilla alba) too.

Mmm… this chasing was, in part, due to my actions I suspect. On seeing this bird arrive, I looked up my favourite bird feeding book and read what it liked to eat – stale crumbs, grated cheese and mealworms.

Ah… I had plenty of mealworms in my shed (lol – a Mother’s day gift) so I crushed some down a bit (knowing Starlings and Blackbirds would run away with them otherwise) and put them in the area near the feeder trays where the Pied Wagtail was first seen. I guess the Pied Wagtail was just looking after its find when it was chasing the Chaffinches.

This first Pied Wagtail arrived just after 10am and was the last bird to be spotted yesterday leaving after 6pm – now that’s what I call a serious day visit to a garden! Let’s take a little look at some highlights the Pied Wagtail garden tour… 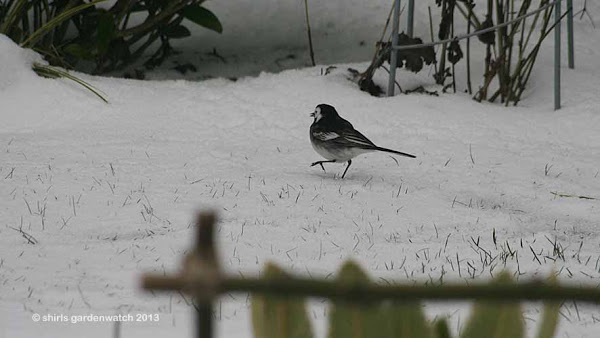 Crossing the open grass area to see what’s available at the hedge side
(nice thin snow here after it was cleared for access to feeders). 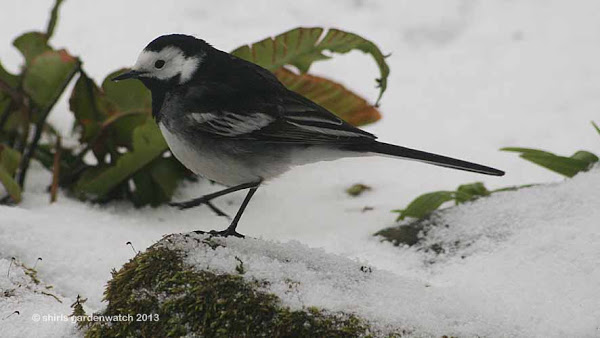 Rock climbing around the pond area – a favourite spot. 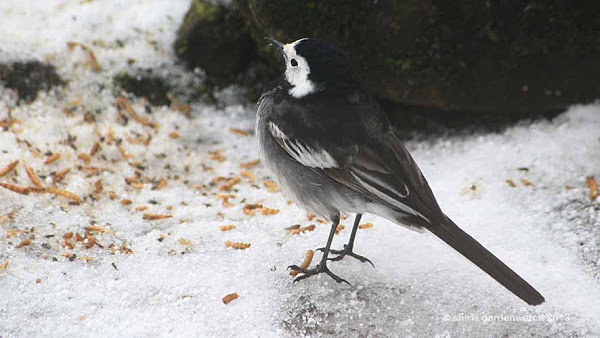 Time for a snack – the crushed mealworms near the Acer feeders were very tasty. 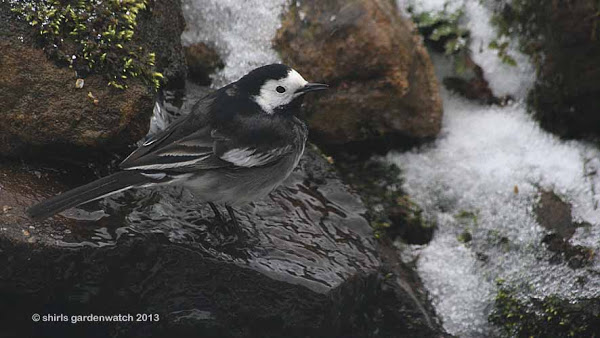 Time for a drink – ah… fresh running water (need to keep up fluids with all this walking). 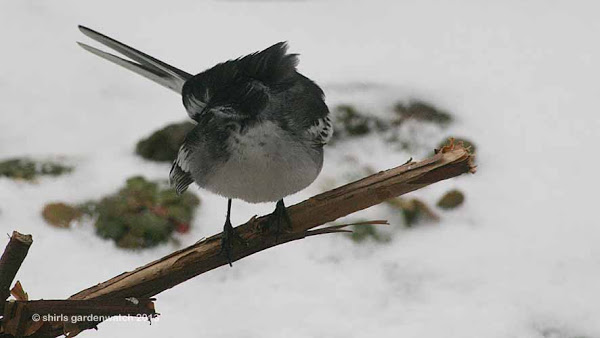 Time for a bit of preening – got to look my best. This is a nice perch on a feeder table. 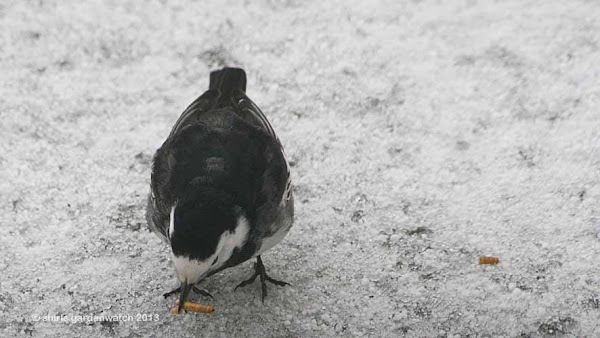 Some time away from the crowds required – mealworm to go. 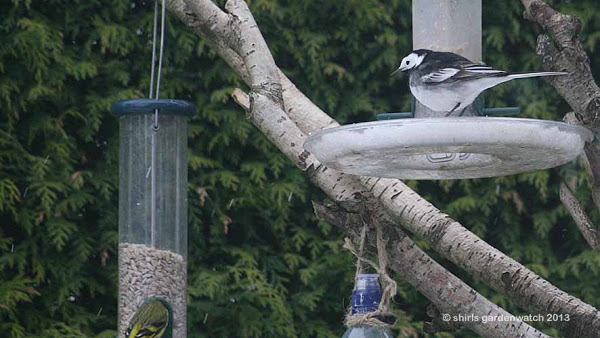 Time for a trip up tree feeder tower – where is Mr Siskin’s head? 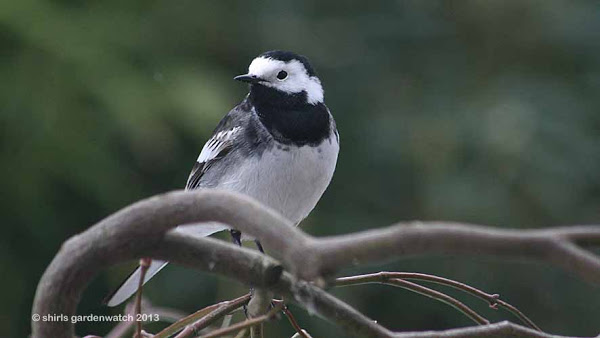 This is a nice garden viewpoint – you can take my picture here if you’d like. 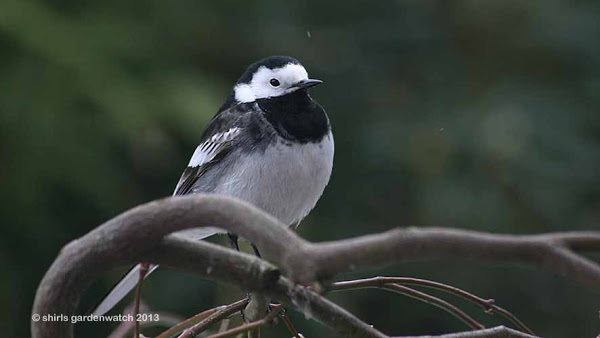 Although the Pied Wagtail messed up the relative harmony at the busy feeders yesterday it definitely kept my ‘camera’ attention for a large part of the day. It was an entertaining bird to watch as the compilation of video clips below will show.

Once I uploaded my many clips for editing (like the Pied Wagtail knew) it took a good period of preening in one of my borders where the light was good – so my camera came out again. It is a lovely close-up of a bird that doesn’t stay still for long. I was delighted to get this extra piece of footage. Enjoy…

So, to the big question – would the Pied Wagtail return this morning? Yes is the answer. It was the first bird I saw when I opened my curtains! Okay, I wasn’t going to let it rule the feeders for a second day so ‘Starling tactics’ were required. What are ‘Starling tactics’ I hear you ask 😉

A few years ago, a single Blue tit Mum tried in vain during a wet Spring to feed her chicks. After seeing her take the last bits of a fatcake into her chicks (camera in nestbox) I put out a new fatcake to help her. Unfortunately the Starlings are a fan of this and hampered her getting near as they attempted to devour it. My solution at the time (as per a suggestion by an RSPB staff member at a local visitor centre) was to provide easier food for the Starlings in the way of fatballs on the ground away from the other feeders. This did work for the main part and enough for the Blue tit Mum to get access to the fatcake. Sadly her chicks died anyway.

The ‘Starling tactics’ I employed for the Pied Wagtail this morning was much easier. I made a lose trail of crushed mealworms and breadcrumbs towards Hedgehog Manor and sprinkled a generous supply in there together with a fresh dish of water. It didn’t take too long for the Blackbirds to find this food as they already knew this as a source (I feed hedgehogs here). It wasn’t too long after that and the Pied Wagtail was seen on camera – although it was a tad nervous of coming inside at first.

The Pied Wagtail now had more choices in food areas and although it did return to the pond area where the Chaffinches were feeding there were no mealworms there for it to protect. The Blackbirds would chase the Pied Wagtail at times and the Chaffinches seemed to know that they could come down in numbers if the Blackbirds were about. It’s been fascinating to observe the behaviour of birds in my garden.

There was a bit more harmony in my wind chilled garden today, it was lovely to see a female Brambling feed at the pond area too (photos another time). Towards the end of the afternoon, when the garden was fairly quiet, I’m delighted to report that a group of Yellowhammers landed on my still snow covered lawn. I didn’t see them at feeders, nor did I see where the Pied Wagtail was at the time. Hopefully they will return although my problem then will be stopping taking more photos and video of this very pretty bird that I know will be gone when the snow goes.

As for the entertaining Pied Wagtail – it brought a friend at one point today! I was getting a tad worried that we could see an invasion but as the mealworms were tucked away this second bird didn’t find them nor stay long – phew! Have you had entertaining antics with birds in your garden this weekend?

Finally, an update from my previous post where I promoted the appeal by Scottish Wildlife Trust for funds for an Osprey satellite tracking device – brilliant news there as they have met their target very quickly! They are now looking to raise the target to get two devices which is great news all round. Like many people around the world, I’m looking forward to following the Osprey stories for 2013.