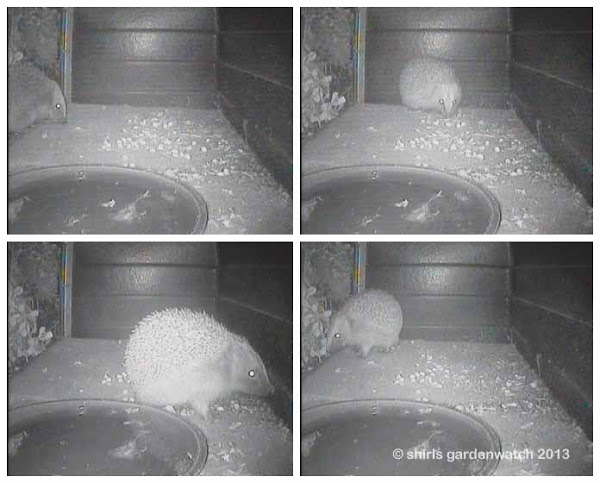 Yay… Hedgehog Manor (recycled guinea pig hutch embedded in garden border) is open to diners once again! Sunflower hearts were on offer during the snowy spell in late March, just in case any hungry hedgehogs newly emerged from hibernation were out and about. There was also a dish of water available as they would also be thirsty.

Last year, with warmer temps than usual, it was March 2nd when I spotted our first two hedgehog visitors to the garden one evening as I walked to my shed. Quite a contrast to this year. It was on the cold, snow covered ground of March 27th, that our 1st Hedgehog spotted for 2013 came in to Hedgehog Manor. I was forunate to be watching live at the time…

By April 3rd this hedgehog was regularly dining on the buffet choices of crushed unsalted peanuts, sultanas and dried mealworms with the sunflower hearts – offered in a wire ground feeder tray and directly on the paving stone base in Hedgehog Manor.

One night I put out some grated cheese (white ball in image below) and it did seem interested in this too. However, as I know a passing cat might find (and eat) the grated cheese, after throwing it to the back of the feeding station the cheese stuck together and that was probably less appetising.

Regular feeding of birds and wildlife in gardens is the key to see them return, and in the case of the birds and wildlife, they don’t waste energy and time coming to gardens for no reward – especially in winter months or during the nesting period. Of course, it is very easy to be to slow in filling up feeders when stuff away from the garden distracts you – especially during evenings and at weekends.

As regular visiting hedgehogs mix up their dining times (probably due to finding new food sources en route) and new hedgehogs discover the feeding station, the buffet at Hedgehog Manor can run low on some of the food selection – namely the very popular dried mealworms! Having spotted this on switching on my PC and viewing the dining area live one evening, I could see the hedgehog diner could go away hungry and unimpressed with this eating establishment and not return.

I quickly and quietly nipped out to my shed, filled a cup of mealworms and walked over to outside the feeding station where I gently tipped the mealworms just inside the open fronted hutch. I used the low light on my phone to see where the hedgehog was and it rolled into a ball and stayed still – as they do in fear of danger.

I knew this hedgehog would stay like that a little while and watched with interest inside at my PC monitor to see it open up, turn round and find the mealworms beside it and then eat for some considerable time. It stopped for a drink of fresh water before continuing to eat more and then another final drink and it was out into the night once again. The ground was still hard at this time and I knew finding food would be tricky so I was delighted to be able to help this endangered wild animal (here in the UK) to build up energy after its hibernation.

Observing that the 2013 hedgehogs, dining in Hedgehog Manor, appear to be uninterested in the food in the wire ground feeding dish (with a low wide opening especially for them) I decided to remove it. Interestingly, in previous years many hedgehogs ignored the food on the ground and went straight to the dish. They definitely are creatures of habit and return to areas they first discover food or water.

The food is fine on the ground in Hedgehog Manor, there’s also more room now should two hedgehogs knock into each other inside (as we have seen before) and it should stay dry – unless of course I spill water when adding fresh to the dish! I should add here that visiting hedgehogs also get used to where the water dish is and after moving it one night the hedgehog walked right past it and missed out on getting a drink – I moved it back to the original location for the next night.

As the infrared of the camera shows in black & white (or more accurately greyscale) it’s easy to see dark or light markings and I was able to confirm on April 16th that at least two individuals were visiting my garden. Note the black mark on the back of the hedgehog below, it’s also smaller than the ones above (each compilation shows the same visitor).

Pretty special as they are, it should be said that Hedgehogs don’t get to ‘hog’ this evening eating establishment completely. Also seen visiting at night is the wood mouse, with its tail catching my eye as it leaves at speed.

Slugs, snails, and spiders of all sizes can also be seen slowly crawling around (up and down walls too) during the warmer months – not alsways fun to watch it has to be said, but fascinating non the less. I always wonder if I’ll ever see a hedgehog dining on one of the slugs – not sure if I’d keep on watching then. Oh I should add, weirdly perhaps, but the slugs seem to be attracted to the sunflower hearts.

During daylight hours, many birds run inside Hedgehog Manor after discovering this secret stash – some taking food away quickly others happy enough to eat a while. Blackbirds, Dunnocks, the Robin, Chaffinches, Starlings, Woodpigeons and a Pied Wagtail have all ventured inside. As you can see in the image below the Grey Squirrel has also been dining – although it wasn’t entirely comfortable dining inside and tended to favour take-away! No surprises there then 😉

Ease of access makes birds confident enough to venture to the food in Hedgehog Manor. A path-side location helps too. However, the one downside of the open front is that leaves and rubbish (blown into the garden after strong winds) can make inside pretty messy and the food gets hidden as do the dangers to hedgehogs (see link above).

Last year’s blog visitors will remember the hedgehog (named Bagman) that got its snout stuck in a crisp packet tucked in a corner that was out of sight to the camera. As the front is the only access I have and I don’t want to add a doorway, I can live with some extra housework.

As well as sweeping, regular dish washing is required too (rinsing mostly) so the water is more appealing to diners. I tend to fill up the dish shown above (a large glazed, ceramic plant saucer that is heavy enough not to get tipped up) from my water butt so the hedgehogs get nice rain water when we have it. No surprises perhaps (living in Scotland), but my water butt has never run dry so far! For those without a water butt, tap water can be used too.

Hedgehogs are lactose intolerant so I should probably add this reminder and warning again. Never put out a dish of milk for hedgehogs as it will make them ill. Oh… but take a look at how they love a good long drink of water – below you can see just a short, end clip of one big hedgehog drinking session 😉

Of course, when all the housework is done and the buffet is out, there is no guarantee Hedgehogs will come to dine. It’s a waiting game when you don’t use motion detector software – but I love the live watching so I’m happy to be patient keeping an eye on the corner of my PC screen as I do other stuff.

So, there is nothing to watch on the Hedgehog Manor Channel – well except for the odd mouse running away with a peanut! Switching channels and we can go to Nestbox TV where the Blue tit Rooster below was inspecting the floor after we had been Spring cleaning its bird droppings which had built up since Autumn last year. It settled down shortly after.

I couldn’t guess if this nestbox will be used this year. A bird (Blue tit) may be roosting but it could be a male as I suspect we had last year as no nesting was seen then. To double our chances, when doing the housework we did some house alterations. We replaced the entrance panel to one with a larger hole so that Great tits could get in – if a pair should be interested.

So, if Nestbox TV has nothing to watch then things are getting uninteresting on the gardenwatching front? Oh no, no, no – once again my garden has surprised me with a new bird species arriving at the feeders! What excitement over the weekend – I’m loving seeing this one and my cameras have been collecting images to share 🙂

On Saturday two females were spotted first, then a male and they have been regulars at the feeders ever since. This is a bird I never thought I’d ever see in my garden, so much so that I didn’t even have it on my wish list! The big question now is – can anyone guess who our newest bird diners are?

After being delighted at seeing three ‘small’ small tortoiseshell butterflies (together) sunning themselves on rocks in my front garden last Friday, my weekend gardenwatching and camera capturing had been planned out. I was hoping for butterfly photos. Oh… but don’t you just love it when a plan doesn’t come together and something even better comes along?

This post was published by Shirley for shirls gardenwatch in April 2013.