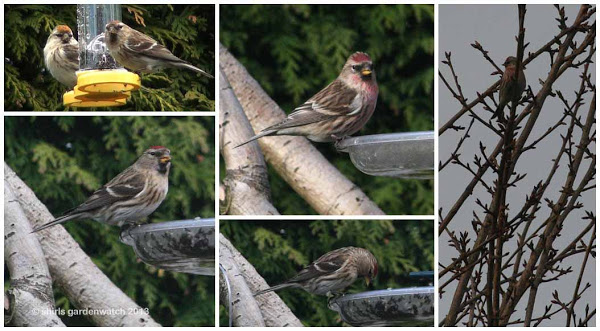 Gosh is it May already? Is it really two weeks since the orange crowns of two small brownish birds were spotted jumping through feeders? At the time, I video grabbed a short piece of shaky footage for an ID and discovered they were Redpolls! Redpolls? I never imagined this was a species that would ever visit my garden and what excitement they stirred.

Winter is a great gardenwatching time for the possibility of new bird species arriving at the feeders. Especially when there is snow. Mixed species flock together and that’s when there can be surprises. Back on April 20th with the snow finally gone and the redpolls too (believed to have been briefly passing through) there was no expectation to see them again. However, just in case, having their favourite nyjer seeds on offer seemed a good plan. Some sunflower hearts were emptied out of one of the feeders. A layer of nyjer seed that covered the top set of feeding ports was added with a final layer of sunflower hearts on top. This black strip of nyjer seed could be easily seen and could potentially attract the Redpolls back. More nyjer seed was sprinkled in the feeder spill trays. It was worth a try.

Siskins can be classed as one of the ‘usual suspects’ in my garden bird community. I’m pretty confident many other species have followed them to my garden – most likely the Redpolls too. Siskins favour sunflower hearts here and with the feeder newly filled up it the male Siskin in the video below wasn’t interested in looking for other food – but what was I seeing now? I’ll let the series of very short videos below (all but one with background music) introduce our newest, now regular garden visitors. I wonder how long they will stay for this time.

The first video below is of a male Redpoll & male Siskin. This is the first garden sighting of male Redpoll (Lesser). It is seen eating nyjer seed scattered in seed collecting tray. The nyjer seed was put there only a short time before. The Siskin gets spooked and leaves but after a quick look around the Redpoll continues to eat. Seen on April 20th 2013, video taken indoors through window.

The next video is of a male Redpoll (Lesser) at garden feeder trying the sunflower hearts. This bird stayed all afternoon and into the evening being the last to leave at 7:30pm. I’ve noticed this before, that new visitors stay late watching over the garden long after the crowds leave. I wonder if he roosted close-by as he was seen again early the next morning. How pretty he looked in the late evening sunshine. Seen on April 20th 2013, video taken indoors through window.

Siskins pair with female Redpolls (Lesser) are up next. On a dull day the bright yellow the male Siskin brings colour to the feeders. The female, being paler goes a little more unnoticed – just like the brownish female Redpolls. Redpoll ladies were often seen dining together but not this time – there’s plenty of room and food at the table for both of them too. Is there some jealousy or competition over feeding with the Siskin pair? Seen on April 21st 2013, video taken indoors through window.

Next it’s the tricky identification between the female Redpolls at the small nyjer seed feeder. ID’s between Lesser & Common (or Mealy) can be hard with so many differences in colouring and size especially at this time of year. Especially if you are new to this species as I am. I’m guessing the female in front is a Lesser Redpoll but the female behind appears to be larger – could she be an uncommon, Common Redpoll? Seen on April 26th 2013, video taken indoors through window.

Gusts of strong winds didn’t deter this female Redpoll (guessing Lesser) next. She just kept on eating. I loved this capture where she looked like she was on a theme park ride! We’ve had a few very windy days since the Redpolls arrived. Not surprisingly she was the only diner at the garden feeders at the time. Seen on April 28th 2013, video taken indoors through window.

This next video of a female Redpoll (Lesser) was an outside recording. As the garden was quiet, this female was in no hurry as she dined on nyjer seeds. Note what little colouring is seen in this view – she could almost go unnoticed at garden feeders. At glance she may even be considered looking like a female House Sparrow. Seen on April 30th 2013, video taken outside with small waterfall trickle in background.

Next up is as a couple of Female Redpolls (Lesser). Looking very pretty and serene in the sunshine (with their orange crests) these ladies doing lunch look very polite and well mannered – until it comes to vacating their table for other diners. Seen on May 1st 2013, video taken indoors through window.

Male Redpoll gets dive bombed by female. Redpolls have definitely taken ownership of the small nyjer seed feeder and some females seem to think it’s a ladies only diner! Here a male is seen happily eating when he notices something above… an incoming female diner. Seen on May 1st 2013, video taken indoors through window.

Goldfinches very much enjoy nyjer seed too. Next is one seen feeding with a male Redpoll (Lesser). Once the arger Goldfinches discovered these feeders the debate with Redpolls began! Here there is harmony and the male Redpoll stayed a while. Seen on May 1st 2013, video taken indoors through window.

So there we have it, the highlight of April gardenwatching has moved into May as Redpolls continue to visit daily. How brilliant is that? It’s hard to say exactly how many individuals are currently visiting the garden but I might guess at least three males and possibly four females.

I contacted the helpful peeps at the Birdforum asking opinions on ID to be told, with so many variances in colour and size (including cross breeding in Scandinavia) it can be difficult to say for sure if any birds visiting my garden have been Common Redpolls. They are probably all Lesser Redpolls (I’m not complaining at that). Although I must admit to always being keen on the right ID, I’m delighted enough that we have a variety of Redpoll garden visitors and they have certainly been keeping me entertained.

So Redpolls are possibly the new Siskins arriving in our gardens? I’m fairly confident there will be data around the UK to support this in the not too distant future. I’m sure I read something somewhere about this whilst searching for confirmation on ID’s for the birds currently visiting my garden.

Now… the big question to end this post has to be… has anyone else seen Redpolls visiting their garden feeders? Perhaps you want to take a good look at the image above and view through all the videos above to get a good feel for this bird in different light levels. It could be visiting your garden on dull days and you haven’t noticed it. I really, really don’t expect that I’m the only one.

Oh yes… and to all the reviews on nyjer seed feeders that state they are a waste of money… I bought my feeder shown above from my local RSPB Visitor Centre shop (I’m sure it is available many places online). I spent just £3.99 for this mini feeder that was full of seed too. I did make one amendment and that was to remove the flimsy hook and replace it with a cable tie and it withstood some serious winds! I guess you just need the right birds to visit to ensure it is used and they are… REDPOLLS!!!! Siskin’s and Goldfinches were only seen using this feeder after the Redpolls were using it and that was within and hour of it being put up 🙂

Enjoy the rest of your weekend (it’s a Bank Holiday one in the UK). I’ve been enjoying getting back in to my garden. I actually like weeding although I absolutely love moving my plants around in my borders! Have you had new bird visitors or managed to get out into your garden this weekend? I’m adoring my native primroses coming into flower in nice sized drifts 🙂

Oh… one final piece of gardenwatching news… it doesn’t look like we will have any nesting action in our nestbox with camera for 2013. We currently have a rooster Blue tit but no nest building so I suspect this is a male. However, I do know of two bloggers who do. Pop over to MIDMARSH JOTTINGS to see nesting birds in a Camera Nestbox (currently with 8 Great tit eggs) where there is Live Streaming when available (normally 7am to 10pm local UK time) or the 2013 nestbox diary at Joe’s Wildlife Garden (last reported with 5 Great tit eggs). Enjoy following their nestbox families and seeing the action from inside 🙂

This post was published by Shirley for shirls gardenwatch in May 2013.