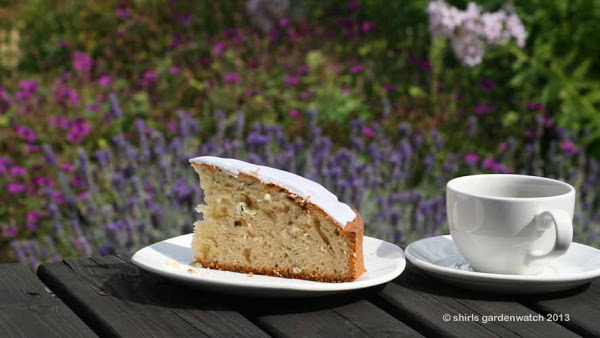 Yep, The Bloggers’ Cut for the 2013 Chelsea Fringe went ahead without me. Aw… and I love to bake cake and seriously enjoy cake decorating. Yep… and tying that in with a garden tour would have been the icing on the cake 😉

The first cake I thought of when I read about the theme for the Bloggers’ Cut was instant. It wasn’t one of my own but one I tasted on a visit to Norfolk Lavender when on holiday in the area back in 2008. It wasn’t strictly speaking a garden visit. However, there was a garden area to wander round near the plant sales which we enjoyed.

The cake above was lavender flavoured which I tried to convince myself I was enjoying at the time. I think from memory I did. We all tasted a bit and I was left with the fork… enough said. I went out there with the lavender coffee too… that definitely wasn’t to my taste. However, this was the most memorable cake I’d say I’ve tasted… oh wait a minute though…

What about the warm, fresh out of the oven, homemade apple flavoured cake left out on the dining table by the cottage owners for our arrival to a holiday home in Kent some years before? Now, that too was memorable especially coming after our visit to the gardens at Sissinghurst en route from London City Airport. That very special garden visit was the icing preceding that very tasty cake. Every time I have seen an apple cake since I have dearly wished I had dared ask for the recipe to that one… she sighs…

So most of us will have heard of and tasted cake but have you heard of The Chelsea Fringe? I hadn’t but the Edinburgh Festival Fringe is on my doorstop so I get the concept.

The Chelsea Fringe coincides and overlaps with the RHS Chelsea Flower Show but is completely independent of it. The Fringe is entirely powered by volunteers.

The first Chelsea Fringe took place in 2012 and is a new festival for everyone who’s interested in gardens and gardening. With its emphasis on participation (most events are free), the Fringe is also about pushing the boundaries – its inguaural programme included a peripatetic bicycling beer garden, a floating forest installation in Portobello dock, an aromatic ‘garden of disorientation’ as well as pop-up community gardens and horticultural happenings of all hues. Anyone can enter a project – as long as it’s interesting, legal and about gardens, flowers, veg-growing or landscape.

More about the Chelsea Fringe

This year fellow garden blogger VP at Veg Plotting came up with the great idea of getting garden bloggers involved in the Chelsea Fringe. She recognised that distance makes it difficult for everyone to be part of events like this especially for those outside the UK.

Ah… but where did the cake come in? Well, there was already an organised cake event running… haha… and one bite lead to another and the Fringe organiser gave the go ahead to Chelsea Fringe… the bloggers’ cut. Well done VP!! 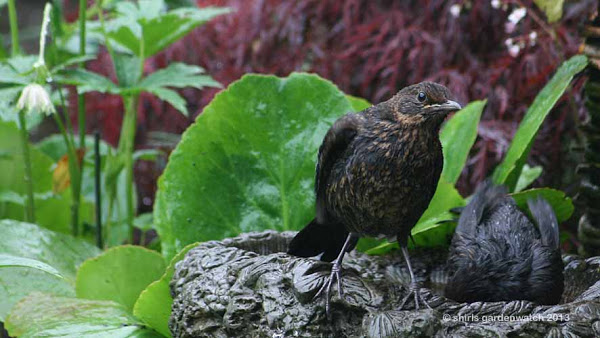 This event is over for this year. Unfortunately, the timing wasn’t good for me (sorry VP) but I was delighted to see others took part and the event got a great write up on the Chelsea Fringe website. I do love to see the hard work of active bloggers like VP get mentions especially when it involves bringing the blogging community together and raising the profile of garden bloggers. She’s already sitting with an idea for next year! VP gets a big gold star from me 😀

Yesterday’s blog at Veg Plotting The Bloggers’ Cut: Garden and Cake Finder thanks everyone for taking part with a map that links all participants to garden visits and cake for everyone to enjoy. Oh yes… some tasty cake recipes may be found there too 🙂 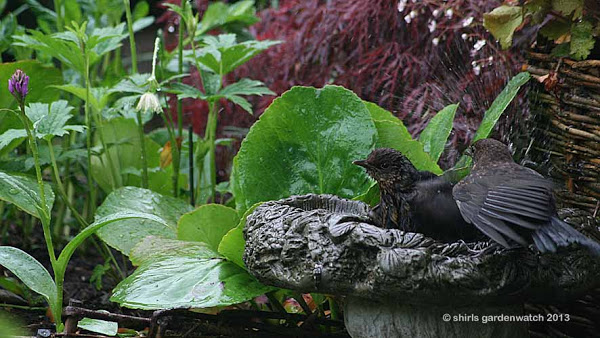 Cake would have probably been quite acceptable to the worn out Blackbird parents in my garden yesterday morning as their young followed them around begging for food. However, the high energy sunflower hearts provide would be much better for the hungry Blackbird juveniles. To help out, I hid sunflower hearts in a ground feeder tray in a spot I knew the parents would find… and they did… very quickly!

We’ve had a bit of a dry spell in the garden which has been great for getting stuff done and enjoying eating outside with the odd barbecue. However, I missed noticing the birdbaths had run dry and no sooner were they filled up and the birds were squabbling over them. However, the two juvenile Blackbirds that caught my camera yesterday seemed very mature and civilized as they waited to take turns in bathing. 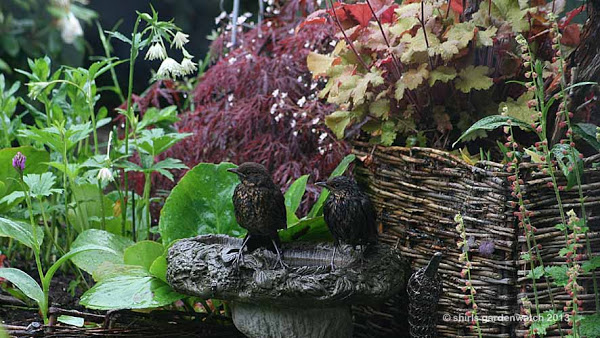 Mmm… don’t they just look so innocent above… like butter wouldn’t melt. It wasn’t until I was cropping my photos that I spotted… my common spotted Orchid leaves with holes in them (seen hanging over the basket on the right edge of my photo) and I don’t suspect slugs this time!

I grant you it is amusing to see young juvenile birds pecking at anything and everything wondering if it is edible. I’ve noticed they don’t appear to instinctively know what is food for themselves when they fledge. I spotted the pair above pecking at leaves, the planting baskets and my iron garden chair and table where one got caught its beak tangled in a cobweb for a moment!

Just as the young birds were refreshed in the birdbath, my plants were also refreshed with an overnight and morning shower of rain. This was much needed too with new foliage growth and flowers in the garden just now. I am very pleased with the plantings and colour in my June borders (images to come soon). When I began my first garden, orange was a colour I avoided as I associated it with marigolds which I disliked. I would never imagined that some years later I would be embracing it!

Coming back to cake… there was no celebration cake special enough for our family during the week that was the The Bloggers’ Cut 2013! There were hospital visits where my OH got the all clear on his annual CT scan check-up after having a tumour removed from his pancreas 2yrs ago – what a relief! My youngest daughter finally got her knee operation after 2½ years with it dislocating regularly (glad that’s over and fingers crossed it has been a success. She is one week down of 12 before her brace comes off and she can have full weight bearing). Oh yes… and the day before the knee op… her (very anxious for her final Uni results) older sister qualified as a Physiotherapist! What are the chances of timing like that? What a relief that all her hard work dedication and determination through some very difficult times at home and with her own health has come to a successful end – she has a very caring and considerate manner and will make a great Physio – I am bias of course 😉 What a week of stresses and highs!

Sadly, there was no cake for my Dad’s birthday (the first since he died) which ended this intense week but he would have been absolutely delighted to hear our news. He was in our thoughts and being the character and fun Grandad that he was, we have many fun memories of him which we will always hold dear.

Finally, what cake memories do you have? Perhaps you enjoy cake in the teas at Open Gardens? Do you have a favourite? If you were to invite some friends round for cake and a cuppa in your garden, do you have a cake in mind that you would like to make/buy/share? I’d have to make two… the first would be my old fashioned chocolate cake recipe that tastes so velvety smooth. The second one would be a simple gluten free lemon Victoria sponge with lightly whipped fresh cream and white chocolate shards as this was the first cake I made for my knee op and new Coeliac daughter. This cake was deliciously light and fresh and I was thrilled to get the texture of the sponge just like one with gluten – so much so that my daughter questioned it 😀

Ooops… I bet I have made you hungry for cake now 😉 Lol… I’ve made myself think of baking! Wishing you a great weekend of good company in gardens, birds and wildlife 😀

This post was published by Shirley for shirls gardenwatch in June 2013.

9 thoughts on “So, I missed eating cake with everyone…”