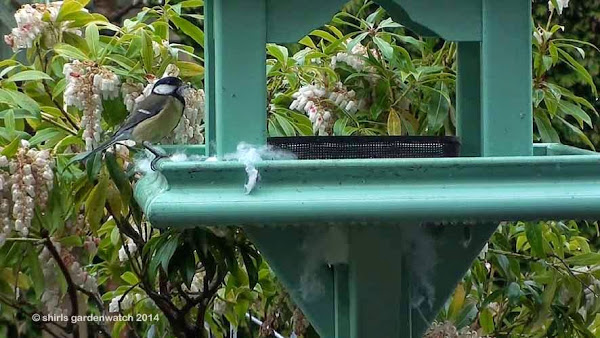 …a Great tit (Parus major) egg first at shirls gardenwatch! Okay, I don’t have any images to illustrate this claim. However, this morning I set an alarm for 0510 (as my intention was illustrated by my phone alarm pic in last night’s post) to see if there was enough daylight to see an egg being laid in my nestcam box (such a pity the extra IR cam has gone faulty to see more clearly and to share these images).

Yep… when I asked the question on last night’s blog: ‘What’s going on in the garden tonight’ the answer was: ‘A bird is roosting in our nestcam box after completing the final stage of her nest build perhaps with the intention of laying her first egg of the season in the morning. How did I think this?

Well… in previous years, three nest builds have been watched live via a cam in my nestbox. Two have failed sadly, but in all previous years which have had Blue tits (Parus caeruleus) the pattern has been the same pre egg laying. Although motion capture systems are available (similar to gardenwatch assistant Mr Bushnell) I have always enjoyed watching nesting action live – it’s so much more fun that way.

This morning’s story went… at 0512 my PC was showing very dark images from the nestbox as daylight was low. I could hear a bird repeating a call from outside my window – again and again it called. On opening the curtains a little, a Great tit was spotted on the top branches of a tree just below the nestbox. I believed this to be the mate of the bird inside.

Previous observations of nesting activity at this point, tell me this is classic behaviour of a male bird expecting an egg to have been laid inside the nestbox. As, I’ve said above I have no image but just behaviour to go upon to come to the conclusion that there is an egg in our nestbox tonight and perhaps another will be laid tomorrow morning (no alarm set tonight though).

Classic behaviour (my observations) back on the nest after an egg has been laid is for material to be pulled over to cover the egg to hide it and keep it warm. Then the female might have a quick doze – despite the insistent calling from her mate outside. Laying an egg takes a bit of effort – doesn’t he know that 🙂

By 0525 this morning the nestbox was empty again and all outside was quiet for a while. Then… the Blue tit pair that have been interested in this nestbox appeared at the feeders (they didn’t approach the nestbox this time). Back came the sound of the male Great tit calling again!

Soon after, the female Great tit returns to the nestbox with some of the material I put out on the bird table (so I could see her there). Once again, she covered the eggs with the material allowing my camera or any intruder no view of her egg! She leaves the nestbox and all is quiet in the garden again. 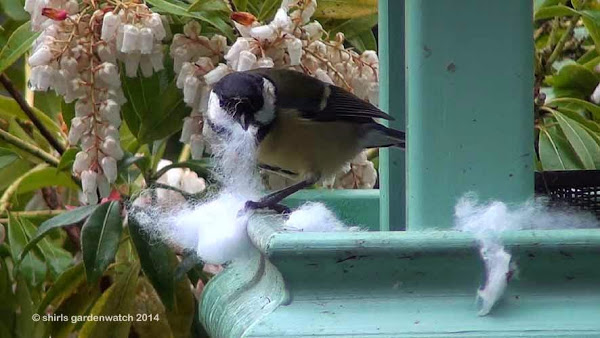 This story repeats once more, before I finally switch off the PC at 0640 (I hour later than planned). So fellow gardenwatchers, I do believe we have a nest box family to follow for 2014! How exciting. I’ll gather up a selection of images to share the story of how we have got to this stage over the weekend and perhaps I’ll get some views and images captured of eggs in our Great tit nest.

Oh yes, and another nesting update… the House Martins have returned to a nest built at the front of our house for a third/fourth consecutive year! I captured images at the time of that build but there was family stuff going on at the time and I never posted them. I’ll look them out and see if I can capture some new footage over the weekend (although rain is expected).

Quite a few plants have come into flower in the last few days too – the garden is really coming alive now! I noticed small tortoiseshell butterflies in our garden today, I must keep an eye out for any other ones fluttering around – have you seen butterflies or birds nesting in your garden? Enjoy your garden this weekend and any gardenwatching you do too.

This post was published by Shirley for shirls gardenwatch in April 2014.

8 thoughts on “I do believe we have…”