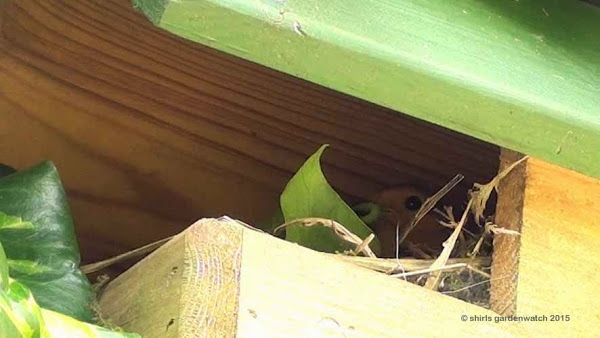 Last night BBC Two Springwatch returned to our screens with seasonal chat about nature at this exciting time of the year. Story developers follow live cams (many on birds nesting) 24hrs throughout the three weeks of this show. Oooo… now that’s a seasonal job that would suit me very nicely 😉

Last week’s Chelsea Flower Show tribute week (still more to come) was such fun that it would be amiss of me not to give Springwatch the same treatment. After all, it captured my attention when I began this gardenwatch blog. Regular visitors will know this blog began just as a temporary thing (a broadband friendly way) to send images of the Eurpoean Robin to my homesick friend in Australia back in 2006. Sadly, she died in a tragic, freak accident and won’t get to see this 🙁

For the next three weeks I’ll try to keep up with Springwatch, posting snippets from my own garden about the birds and wildlife that find their way here as well as footage and images from out and about. Lots of old video footage and stories are sitting just waiting for their moment. This could also be fun and a great gardenwatch update for me too. There will be an interval or two back to Inverewe Garden to complete the Chelsea tribute and the Gardening Scotland Show which is on this weekend too.

In my story developer role, I’m delighted to update on our garden story of the Robin pair that frantically built a nest in an open fronted nest box sighted in my ivy clad Pergola. Did the noisy neighbours (woodpigeons and hedgehogs) scare them away? No they did not, we came back from our hols and they were still in residence 🙂

This Robin nesting story has since moved on a bit, yep, last weekend the male was seen visiting the nest more often… now with wriggly food in his beak! Although there isn’t a camera in the nesting box, my basic video camera on a tripod below it has captured a more detailed look of the food deliveries – not for viewing at mealtimes perhaps 😉

Just like the Springwatch story developers, I sat watching my many clips of video capture on my monitor looking for one thing (food going in) and observed a piece of random behaviour with a fly. Clearly the female Robin knew it was coming and was on alert and she very efficiently dealt with the situation. It was such fun watching the footage not knowing what was going to happen next.

2 mins 11sec, 2 clips, Female robin chases away fly,
with background music and pair in nest without music, both leave.

As I’m the only story developer here, not able to gardenwatch every day, I couldn’t guess at how old the Robin chicks are. However, some seriously big food deliveries were made yesterday morning with a quick exit by the parent birds. Having previously been the story developer for a successful Blue tit nest with a nest cam, I might say the Robin chicks are a good size already!

Appreciating that not everyone has time to view the short videos above, as per usual, I’ve captured a few video grabs to give you a flavour of the varied menu the Robin chicks having been served. Notice the female sitting at the back of the nest in the first image with a juicy green caterpillar – a few caterpillars went in this yesterday (when all footage this was taken). 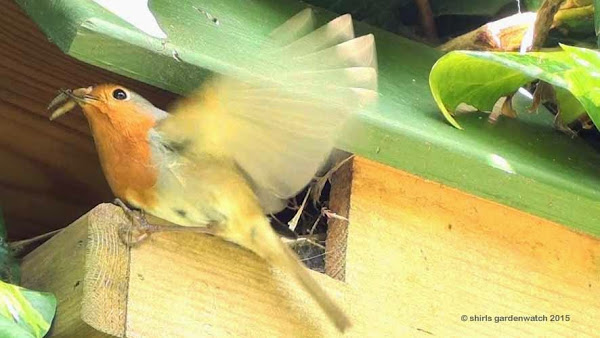 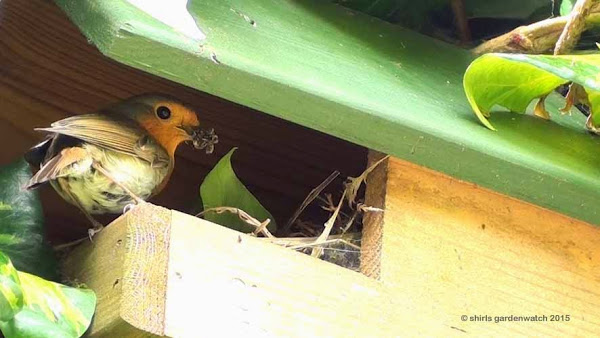 In my story developer role, I have observed that the Robin is a way more cautious bird to approach the nest than the Blue tits were. In the image above of the male with the wings open, he landed but quickly left again so he was clearly unhappy with something around him. He did return as can be seen in the video. Note in the video that the female is leaving the chicks alone for spells but brings them back a food delivery from her trip out 🙂

The Robin doesn’t appear to be removing the Fecal sacs (chick poop bags) as the Blue tit did either. From the views seen of the female on the nest, she doesn’t appear to be doing the diving into the nest cup to keep it clean but then again my view is limited. Sadly, my time as a story developer with this Robin family might be limited too and just as I was getting into the swing of it.

Last night, I was outside just before dark and heard a Robin calling again and again. In the low level of light, I could just see where it was perched and it was a branch I’ve seen the male use many times over the weekend. It was a pretty persistent call of a kind that I’ve not been hearing from the Robin in my garden. It was quite eerie seeing his silhouette too.

Perhaps the male robin was just calling the female out telling her the chicks can be left alone now. Perhaps, he was calling the chicks out to fledge. But then again, I have heard an eerie, persistent call like that from a Blue tit female when she had chicks to feed. The male Blue tit never returned and the female was unable to find enough food for her chicks and they died. Oh dear… has something happened to our Robin Mum!