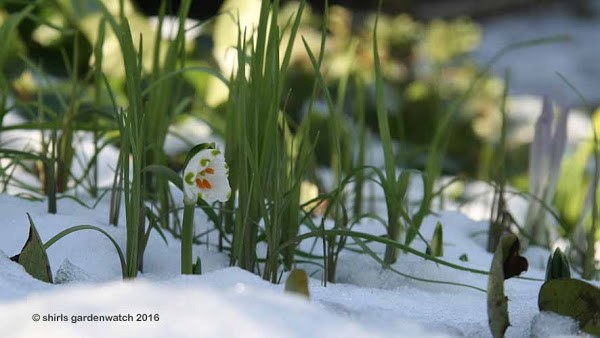 Seriously careful steps were required yesterday during a back garden wander with a camera. Hard, thick ice coated the paths like badly made royal icing. Footsteps on the snow covered lawn barely made a footprint. Cold temperatures had encased the snow flurries of the weekend, in complete contrast to the heavy, melting snow releasing the garden back on January’s GBBD wander for flowers in bloom.

On the positive, a sunny lunchtime created great light and shadow around my wildlife pond making taking photos as fun as it can be with freezing fingers. Yesterday’s snow was definitely of the pretty kind but there was a single fresh snowflake that was the prettiest of them all…

The gentle slope of the walled bed above the wildlife pond was deliberate so reflections are possible in the water below. Being a very small area, this bed is becoming a home to bulbs. This is their safe haven in my garden (apart from the ones that are in the lawn) and I have pledged to leave them in peace here. I am now being rewarded as this has become my favourite Spring area of the garden. 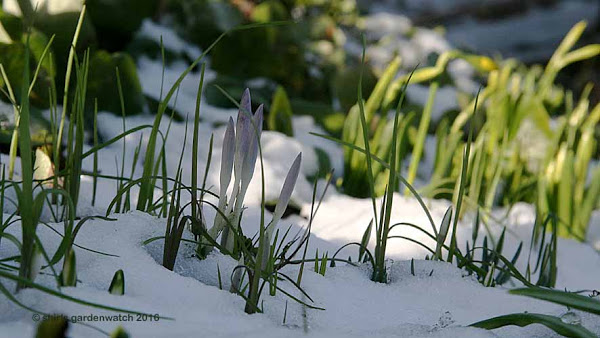 Early pale crocus, around it snowdrops just peeping through and tete a tete daffodils in the background. All down the slope from the snowflake.

Careful planting steps are required if adding any new bulbs to this area. That’s where keeping a blog and taking regular photos helps locate them all. Last week, the relocated Wendy moved in after having a brief greenhouse stay due to weather conditions following the journey from fellow garden blogger Anna’s garden. Thanks to ‘himself’ Wendy definitely travelled first class… 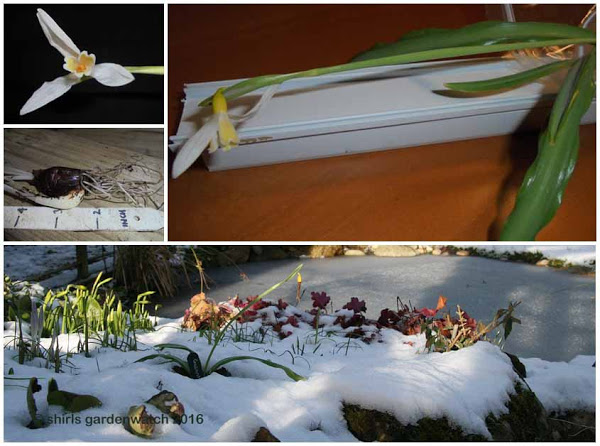 Snowdrop, galanthus plicatus ‘Wendy’s Gold’ thanks to the generousity of
Anna at greentapestry’s draw to give away a surplus bulb from her impressive
galanthus collection. Thanks also to ‘himself’ for picking my name out of the hat. Wendy has been given a prime spot with a great outlook 🙂

I’m looking forward to seeing Wendy and all the other bulbs in this area giving not only a great show in future years but being allowed to bulk up (a new era for bulbs in my garden). This wildlife pond area was talked about for a long time before I committed to actually putting a liner down in October 2013 but it really has become a valuable addition to the garden. 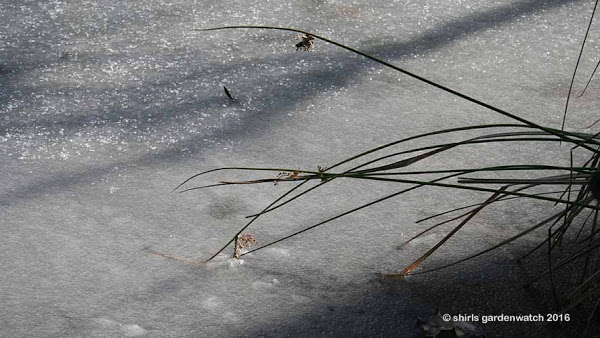 Soft Rush, Juncus effusus (flower heads from last year)
frozen into the wildlife pond which was completely frozen over. 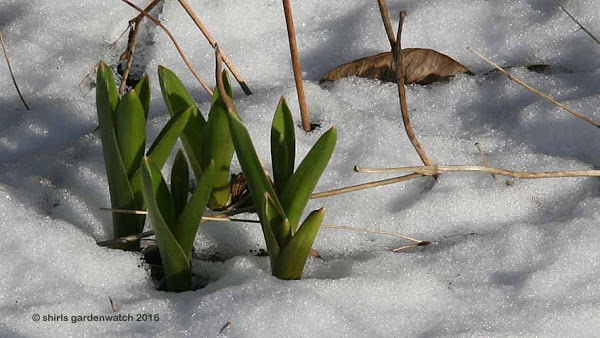 Alliums, globemaster perhaps, first glance thought they were tulips.
The pointed red tips were the big clue for the larger flowering Alliums 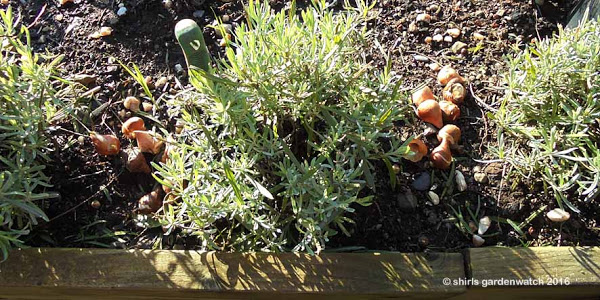 Front garden planting of Tulip Queen of the Night bulbs in the warmer soil
of last week! They were sprouting in their packets in the potting shed :-0 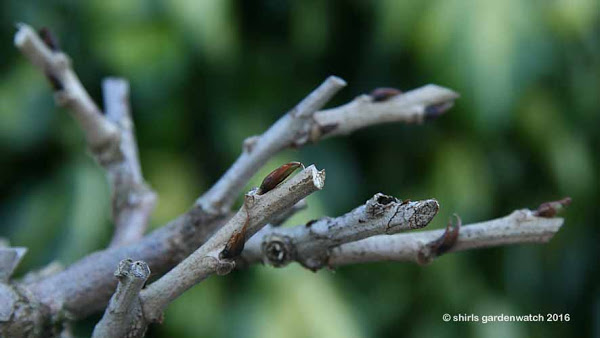 Reminder for February pruning of Wisteria to two sets of buds
(done on the 8th this year as the weather was warmer then). 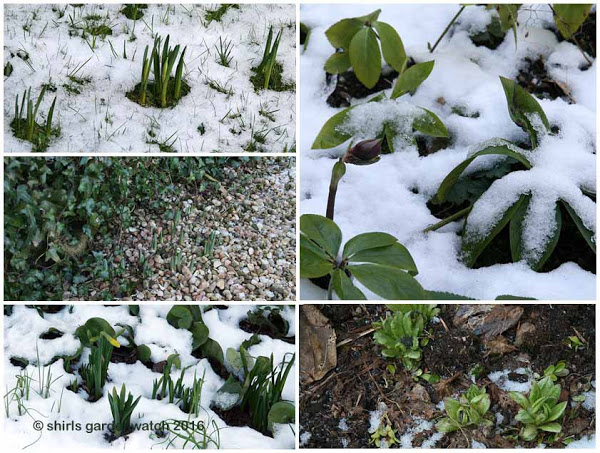 Narcissi, Hellebore and Primula progress – flower buds about to open
(they’ll be in flower in England I suspect – GBBD posts will reveal all). 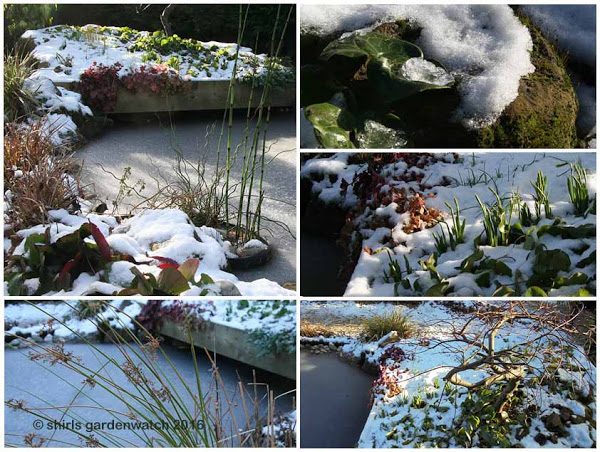 More views around the wildlife pond with special mention to the wild ginger, Asarum europaeum with its glossy leaves under planting the small Acer tree. Bulbs are happy to grow through it too 🙂

So that’s almost it for the 2016 mid-February garden. Yesterday’s images captured the day shared by many other bloggers as they joined Carol at May Dreams Gardens for Garden Bloggers’ Bloom Day (GBBD). If I went out with my camera today the images would be quite different.

Today, the temperature has gone up enough to melt the perilous paths of yesterday. The snow is melting away (although more forecasted for tomorrow). Strong winds have returned to shake the whole garden once more making it feel just as cold as yesterday.

Years of blogging have revealed that when you focus on one aspect of the garden for a blog post, something else comes along as if to say hello I’m here, take my photo and blog about me. Well, yesterday the first Blackcap to be seen in my garden in a few years did exactly that! What a surprise it was to see him as my camera was uploading my garden images to the PC. 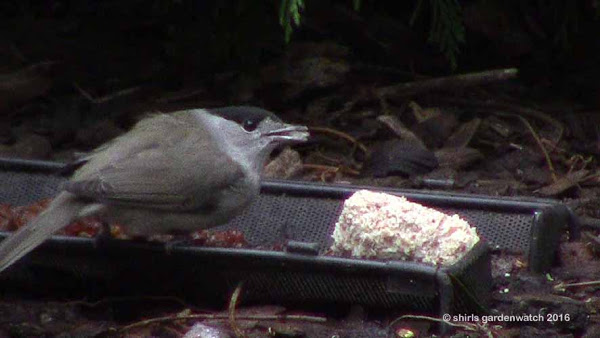 Happy Bloom Day everyone, with special mention to the blooming garden bird population. Are you seeing plants, birds or any other wildlife just now that you weren’t expecting? If I hadn’t been out with my camera yesterday lunchtime I wouldn’t have known that my pretty snowflake was in bloom or that a Blackcap was visiting.

This post was published by Shirley for shirls gardenwatch in February 2016.