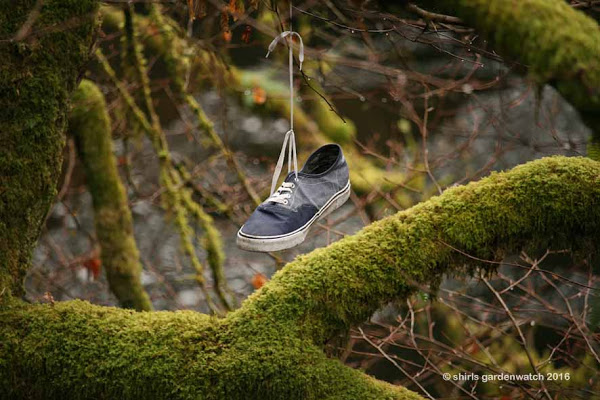 The canvas shoe hanging from a beautifully moss covered tree, seen from the bridge near Ossian’s Cave (NTS Hermitage at Dunkeld, Perthshire), was not what my new birthday lens was expecting to focus on. However, this was a fun, test run, to see how this lens performed. It didn’t disappoint 🙂

Never having had the steadiest of hands for holding my camera without a tripod, this new zoom lens with image stabilizer was a great choice by OH. It only gives a small amount more in terms of zoom but being able to have more success with steadier shots in situations where carrying a tripod is not practical, makes it a winner for me!

A pair of Mallards were spotted first, wandering over the large rocks in the deep pool of water below the hanging shoe. Catching the light on the male Mallard’s eye down at the water’s edge was a great surprise (image cropped) but not as much as it flying up to the moss covered top of the stone wall right beside me! What a beauty he was to see so close (image not cropped). My photo was a bit rushed, in contrast to his calmness at being so close. 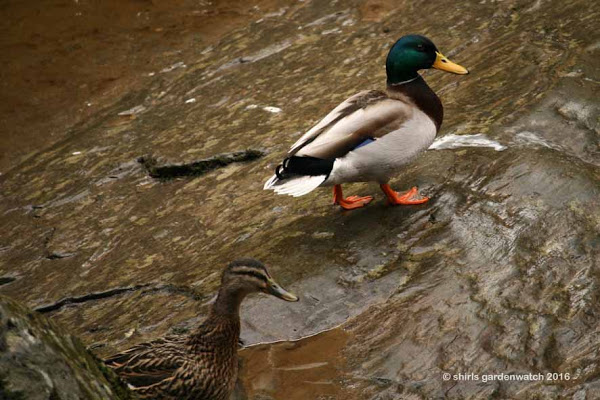 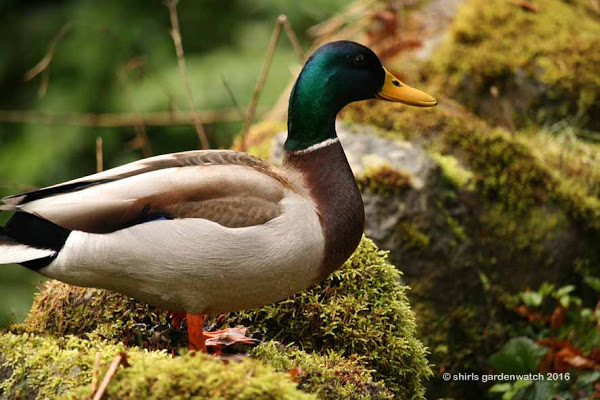 Out on a run, also refers to a drive in the car. This trip on Friday afternoon was a two centre one and the next destination was the SWT Reserve at Loch of the Lowes. As with other Osprey nesting sites here in the UK, there is a bit of a buzz just now with pairs returning to breed. There’s a webcam on the resident pair here affectionately named Laddie and Lassie by visitors (ID’s, male: LM12 and female: LF15). Anticipation is high for the first egg for 2016 to be laid any day now.

However, it was to the observation window in the visitor centre I was heading, this time with my tripod to test run my lens further. Again, it didn’t disappoint! I was lucky with the light and thrilled with captures of the male Yellowhammer (image cropped). The female pheasant I was also thrilled with, what a pretty face she has and lovely detail in her plumage that without a bit of a zoom in a lens you can’t really appreciate. What a professional, she even stood on a fallen mossy tree trunk for her photo too 😉 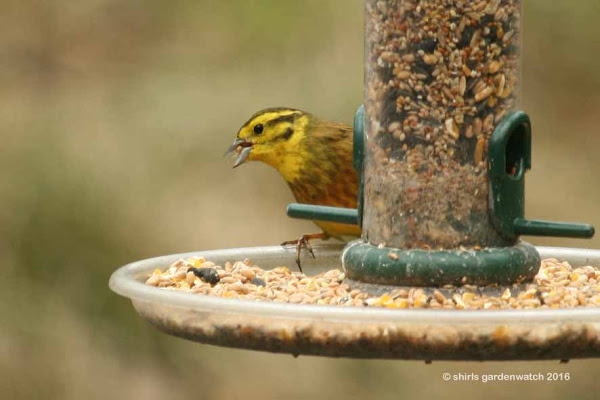 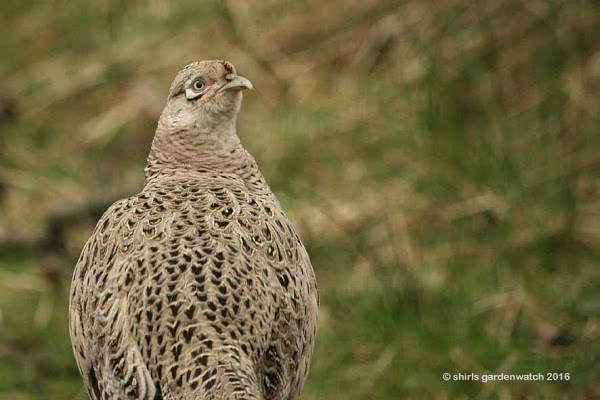 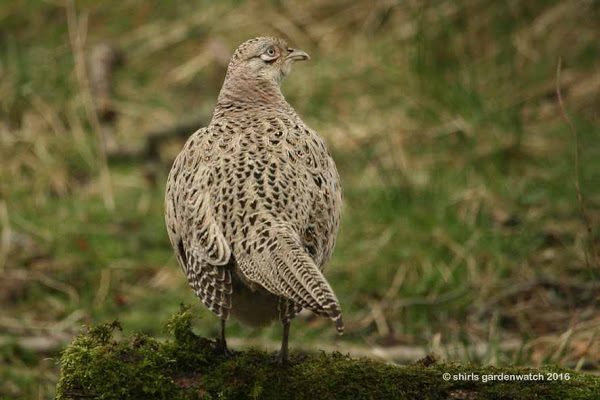 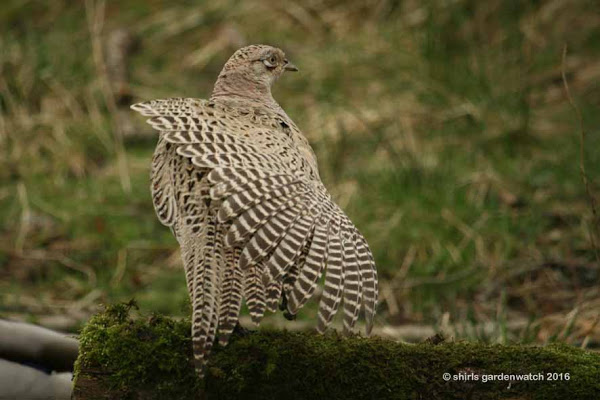 Before heading out on this test run for my new lens we had a much shorter run to a local restaurant that had large ponds. Regualr blog visitors may guess where this is going. Disappointment over no frogs finding my pond (stocked with a variety of plants for cover) led me to search out local ponds to ask if some frogspawn could be donated to start off my pond.

A phone call to the restaurant earlier in the week had confirmed I could take some frogspawn and armed with a bucket that had previously held fat balls I returned home very happy indeed! Fingers are tightly crossed now that this will be a successful batch of eggs and we can watch/share their progress through development. It’s my video camera on the tripod that will be in use if all goes well here. My new birthday lens captured the moment 🙂 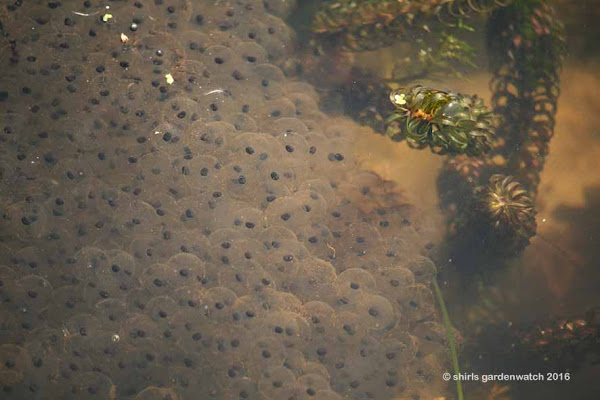 Marsh marigolds are in bud along the edge our wildlife pond, they will open to sunny yellow flowers attracting bees as they pass over. The slopping, top border above the pond is already ablaze with colour. What a lovely time of year this is to be working and taking photographs in the garden 🙂 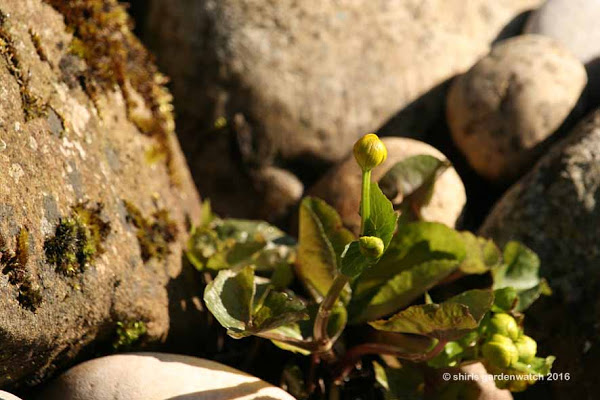 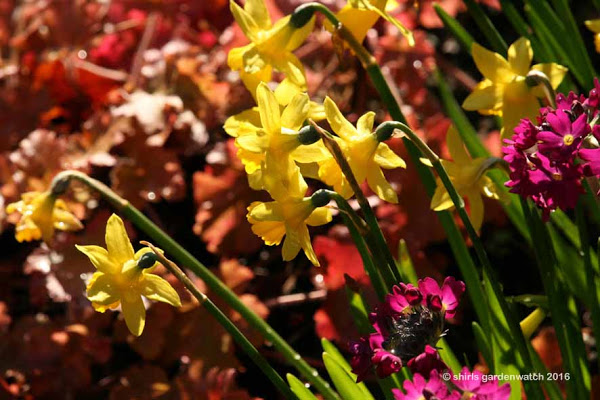 Last, but by no means least, we come to the final test run of my new zoom lens – the view from the gardenwatch window! On a tripod, just as with the visitor centre at Loch of the Lowes, it is working well. However, light levels are tricky here with it being awash with bright morning sunlight to dark shade after and by evening we are on to brief dappled light. Equally, on a dull day it can be a dark area.

On saying all that, if there was bright light all the time there would be no challenge and no fun would there? That bee at the snake’s head fritillary flower and the Starling with nesting material were challenges indeed but then again they are record shots and that’s what this blog is all about.

I do love recording the comings and goings of my small urban garden in notebooks, diaries, blogs, photos and video. After all that hard work, I can’t believe what a huge part our wildlife pond has become too and what peace it gives the garden… well until frogs start jumping about that is! #one day 😉 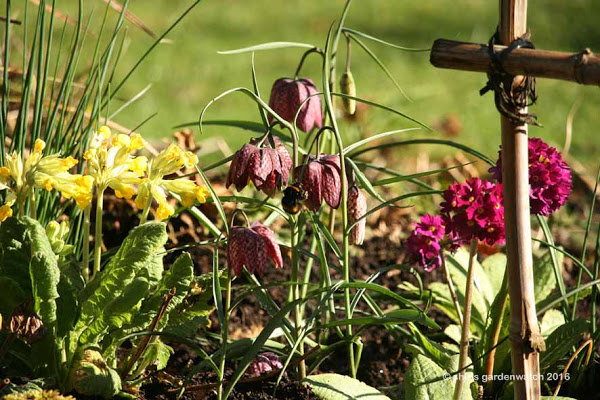 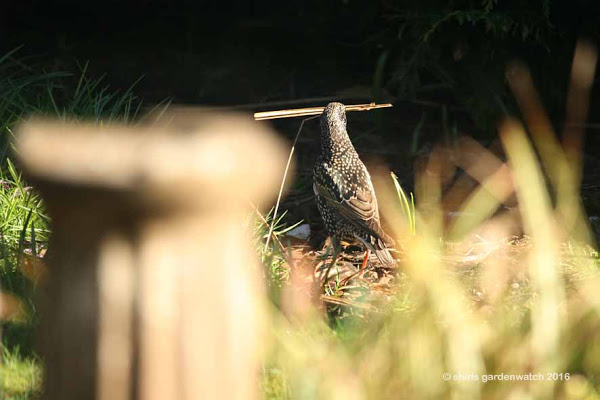 This post was published by Shirley for shirls gardenwatch in April 2016. For anyone interested in which lens took the images above, it was the Canon EF-S 55-250 mm f/4-5.6 IS STM Lens currently being sold at a good price 🙂

9 thoughts on “Out on a fun, camera run”