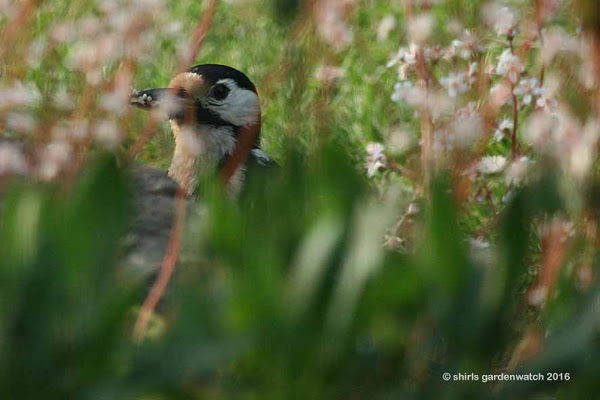 Just as in many a BBC Springwatch nest, there was a possible drama with our seven, ten day old Coal tit chicks this morning! Their parents were out foraging for food. I had been on the PC with the activity inside the nest box (via a cam) in the corner of my monitor. All was going good, lots of feeds and the chicks were growing well.

Then a clumsy noise was heard outside the entrance of the nest box. The Coal tit chicks quickly recognised this sound wasn’t their parents bringing in food for them. They crouched down in the nest cup and stayed very still and quiet. Clever little things.

Rushing to my feet, I quickly opened a window to scare off this possible intruder. I had a good idea who it was too. This is not the first time this bird has shown interest in getting its very sharp beak inside this nest box. As the title of this blog suggests I needed to use a distraction technique to keep Starlings away from our Coal tit family this morning. I had one in mind too.

I’ve found that by putting out more of the food that the Starlings are very keen on like fat balls, which is an easy food to feast on quickly, they get distracted the next time they come to the garden. They then remember where that food is and go straight to it especially when being harassed by their newly fledged chicks.

Not taking any chances today, I would be away for the rest of the day, I put out a few fat balls a distance away from the nest box. I crushed them before putting them on a large ground feeder. I also quartered a fat cake putting squares on other bird tables too.

When I returned home later, a Starling parent was seen feeding a fledged chick some of the fat cake. It was going down well! Inside the nest box the Coal tit parents were seen busy feeding too. All chicks were present and correct 🙂

Did the Starling revisit the nest box later today? I’ve no idea. I did all I could especially as last week I actually saw a sharp Starling beak all the way through the entrance hole! That time the parents were away too. Fingers crossed our chicks stay safe. In the meantime, fat balls will be available in other areas of the garden and I’ll move them further away from the next box each time.

Oh dear, but there was another sharp beak in the garden this evening! This one will successfully peck its way through a nest box too. These tiny chirping chicks will really need to keep the noise down now. Then again, the fat square on the ground that the male Great Spotted Woodpecker found is a quick easy meal so hopefully should it return (usually a winter visitor) it will be happy with that too.

Male Great Spotted Woodpecker in the garden this evening.